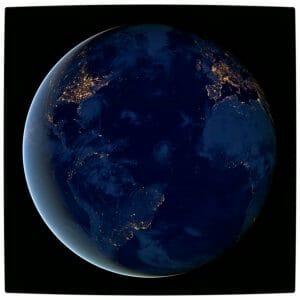 Earth is our solar system’s blue planet. A sapphire amongst the immeasurable darkness of space. Only a handful of people have been provided the privilege and opportunity of  being able to marvel at our planet from the reaches of space.

Countless images of Earth with her pearl clouds, sapphire seas, and topaz and emerald spotted continents are available online and in print media. However, not many photographs exist of Earth’s unique beauty by night.

NASA recently acquired and stitched together two months worth of imagery taken by the new Visible Infrared Imaging Radiometer Suite (VIIRS) satellite to create a completely cloud-free view of our night-time planet.

According to Scientific American, the resolution of VIIRS is six times finer than any previous light-sensing satellite. It is also said that VIIRS can discern not just city lights, but also light from industrial sites, fires, gas flares and boats at sea.

Upon viewing the photographs and video (watch it below) of Earth by night, my first thought was of how the network of lights that span each continent look similar to the neural networks of the human brain. Beautiful. Structured. Interconnected. Earth at night is breathtaking!