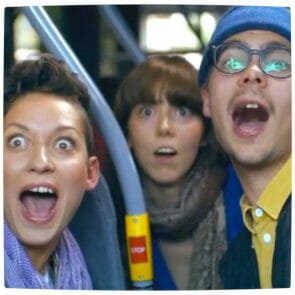 When was the last time you saw a commercial for a bus?

In a land where safe public transport is seemingly less prevalent than a broadband Internet connection, advertisements for public transport services are few and far between. As a result, not many South Africans, or anyone else for that matter, would consider a bus to fall anywhere on the Oxford Dictionary‘s approved scale of amazeballs; excluding the bus from the movie Speed, of course.

The Danish company Midttrafik, however, wants to make riding on the bus ‘cool’ again. In order to do so, Midttrafik have launched a new advertising campaign that showcases just how awesome Midttrafik’s busses are.

The sidesplittingly ‘epic’ advertisement is narrated like an action movie and runs through all of the fantastic benefits and features of using a Midttrafik bus, such as orgasmic seating, panoramic windows and designer bells with “cool functions”. This advertisement is easily one of the best tongue-in-cheek takes on a commercial for public transport. Be sure to watch the video in its entirety in order to be blown away by just how “street” these busses are.