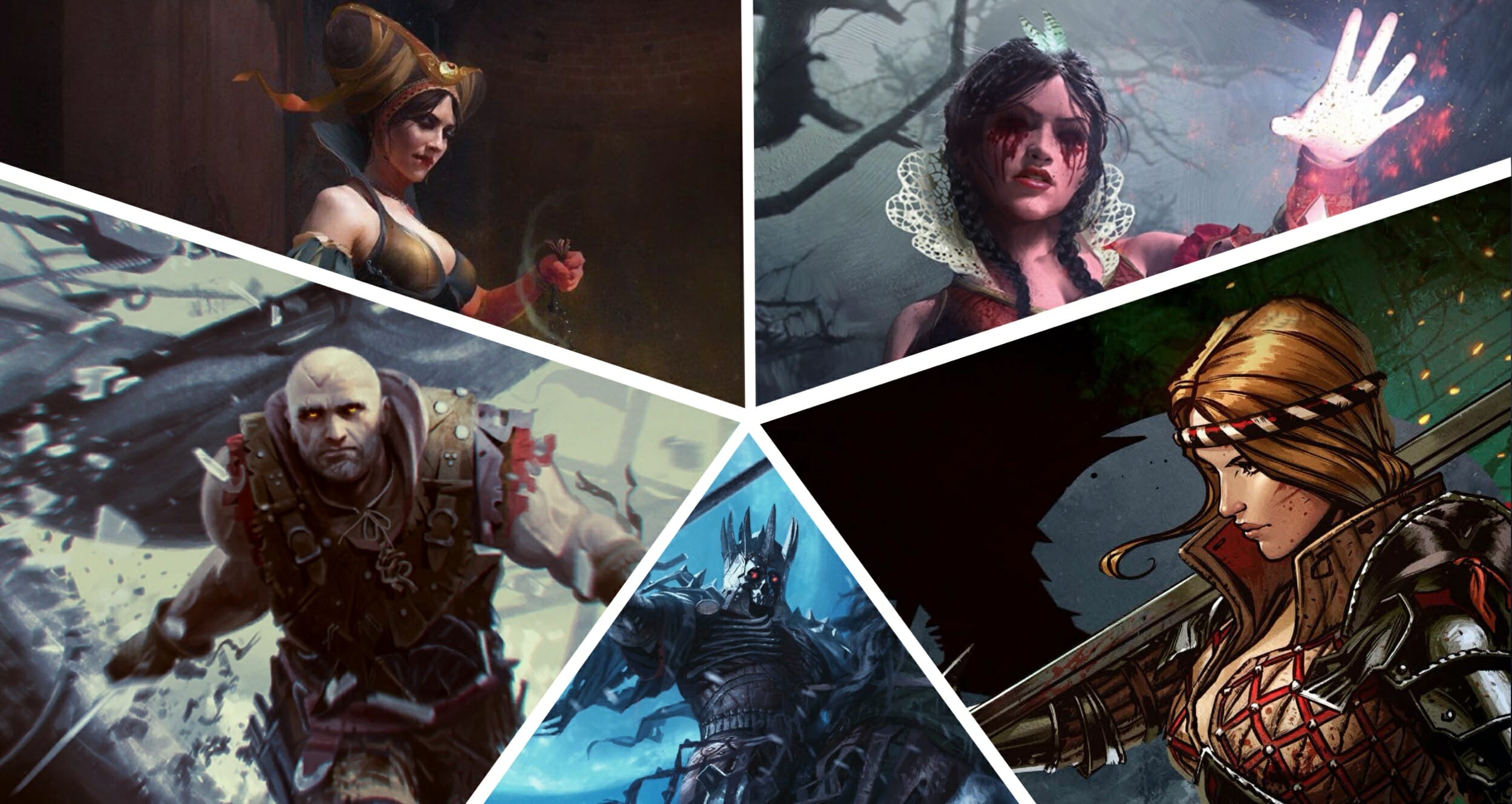 The Witcher is an incredible show. Netflix and showrunner Lauren S. Hissrich did a great job of bringing the world and its characters to life. Now that the first season has come and gone, we have contemplated on what it will need going forward. The answer, my dear readers, is that you can never go wrong with good actors and great source material. As such, we have compiled a list of the top 10 Witcher characters Netflix needs to put in Season 2.

In no particular order, I have listed a bunch of fan and personal favourites that did not make the first season cut. I have also added a bit of context on who they are and where they are supposed to fit in terms of the canon fleshed out by the books, games and series.

10 Witcher Characters for The Witcher Season 2

I was shocked when I finished Netflix’s Witcher adaptation and Zoltan never made the cut. This fiery dwarf is one of Geralt’s longest non-human friends, and has been with The Witcher throughout his darkest hours. Their bond goes way back in the books and its unbreakable nature even featured prominently in The Witcher 2: Assassins of Kings.

While never really confirmed (by either Geralt or Zoltan himself), the dwarf is widely considered as Ciri’s adoptive uncle because of the bond he and the Wolf share. Zoltan is also one of the usual traveling companions for Dandelion (Jaskier) whenever Geralt needs to go out on his own. With the above in mind, I am not saying all dwarves should look Tolkien-esque but I would love to see Zoltan portrayed by the legendary John Rhys-Davies, who played Gimli in the Peter Jackson Lord of the Rings trilogy.

Philippa is beautiful, powerful, and one hell of a character. Of all those featured in the series, she is perhaps one of the most powerful magic users ever. Widely known and respected as a talented mage, Philippa has mastered the art of polymorphy, a type of shapeshifting. She is also a co-founder of the Lodge of Sorceresses and its leader. In the second video game we learn that she was the true mastermind behind the kingly assassinations (Nilfgaard be damned), all for the sake of creating a country ruled by magic.

Philippa’s plans backfire horribly, however, and leads to her being captured and blinded by King Radovid V of Redania. Even without her eyes, Philippa is an intimidating force whose chaos can be felt by all throughout the realms. Since rumours about the Netflix adaptation stirred, I always wanted Cobie Smulders to be Yen. While that is evidently not how things have turned out, I do think she would be an incredible Philippa Eilhart as well.

I found it strange when I noticed Philippa Eilhart was missing from the epic season one finale. When Sile de Tansarville also failed to make an appearance, I was even more surprised! Sile is a founding member of the Lodge of Sorceresses. A group succeeding the Brotherhood and one fuelled by secrecy.

I assume the reason we did not see both Sile or Philippa could be because they had a hand in the entire Battle of Sodden, where the mage numbers dwindled significantly as they fended off the imposing Nilfgaardian forces. On the other hand, Sile could perhaps have traveled south. Maybe she had a mission to rile up the other kings in an effort to get ahead by herself. Whatever the case may be, Sile is a beautiful sorceress with dark hair and dark eyes. A role perfect for an actor such as Eva Green.

Dragons in the world of The Witcher are way more magical than portrayed elsewhere, and Saskia (spoiler alert for The Witcher 2: Assassins of Kings) is one such dragon! In the game, Saesenthessis takes the moniker of Saskia, a hero of Aedirn and fighter for the free folk. Her storyline deals heavily with King Henselt of Kaedwen as he attempts to annex parts of Aedirn after Demavend’s death.

Keen fans and viewers of the Netflix adaptation would know Geralt and friends have already encountered two dragons: the golden dragon Villentretenmerth and green dragon Myrgtabrakke. Readers of the books would also know these two dragons are actually the parents of Saesenthessis, and the very egg they protected in the show was hers! Now that we know both Geralt and Yeneffer can live way longer than normal humans, maybe there is a chance both the wolf and the sorceress will encounter a grown Saskia once again. Joanne Froggatt is no newcomer to fantasy, and I think she would fit the role perfectly.

It is a challenge to talk about the emperor of Nilfgaard, and not mention that he has technically featured in the show already – face and all. Emhyr faked his death and dethroned the usurper leaders of Nilfgaard. This lead him down a spiral where he became war hungry for more territories. Emhyr has been mentioned a bunch of times in the show already.

While I am trying to be as coy with the details of who he is, anyone who has read the books and played the games will acutely be aware of the big season 2 reveal coming in 2021. With that said, I am including Emhyr on this list simply because I want to see him in all his glory, ordering troops around and moving the pawns on his tactical map in his office. Since he has already been cast, I also do not need to think about a fitting actor [though Charles Dance would have been an incredible option] to fill the role. Let us just hope we get to see him fighting both along with, and against, Geralt sooner rather than later.

Vesemir is, for all intents and purposes, the “wise old man” for The Witcher. This old Witcher is responsible for bringing Geralt into the fold, and also for looking after and training Ciri in the books. Now that Geralt and Ciri have finally found each other, it goes without saying that the next stop would be Kaer Morhen. It would only make sense.

Vesemir has been mentioned a few times in the show, but has not actually featured in any episodes (unlike a certain emperor above). The beauty of Vesemir is that he has a very commanding, yet pleasant, aura in both the games and the books. He also has the masterful ability to get lost in the moment and become a beast on the battlefield. An actor who would undoubtedly play the role perfectly is Bryan Cranston, unlike some other joker the internet wants to assign.

Letho of Gulet is a Witcher from the Viper School, and made quite a prominent appearance in The Witcher 2: Assassins of Kings. Geralt realises soon into the game that Letho is the one who went around killing kings in all the Northern Realms. His vision? To sow chaos and weaken them for the upcoming Nilfgaardian invasion. At the very end of the game, Geralt encounters Letho. The two Witchers have a pretty neat discussion about the past and the future, and the player is left with the choice of letting the king slayer go or killing him outright.

Considering how Letho is a prominent Witcher from the games, it is no stretch to think how the character may make an appearance in the Netflix adaptation. Letho is described as a large man with surprising reflex and speed. I would love to see someone like Daredevil’s Vincent D’Onofrio play the role.

While the events of The Witcher 3: Wild Hunt take places well after the events of the books, I think having the King of the Wild Hunt show up some time in the future would be incredible. The Wild Hunt is a potent astral force that comes form a different realm all-together. Eredin seeks Ciri’s immense power in order to get the ability to invade the continent for good, once and for all.

The Wild Hunt is briefly mentioned in the first episode of The Witcher, but never brought up again thereafter. This proves that the ever-moving force already exists within the universe of the show. Perhaps season 2 could sow the seeds of their inevitable hunt for Ciri, with it culminating at the very end of the final season? I am not too fussed about who plays Eredin, other than the fact that it should undoubtedly be Nicholas Hoult. This X-Men actor fits the bill perfectly.

Philip Strenger a.k.a. the Bloody Baron, is one of The Witcher 3‘s most intriguing characters. The character is dearly referred to some fans as “emo Robert Baratheon”, but honestly features way more depth than George R.R. Martin’s ruler of the North ever could. The Bloody Baron’s quest is one where you could sympathise completely, or find absolutely disgusting — there is no in-between. It is a truly wonderful thing to behold in a game.

While Philip Strenger seems to be a character from the games only (having not been mentioned in any of the five mainline book entries), it would still be nice to see the character’s plight come to life in the adaptation. The Baron is a troubled man who made a collection of bad choices. He also looks a bit like Robert Baratheon, so why not have the very same actor play him? Mark Addy will surely do the character justice.

Osbert is another Witcher from the Wolf school, just like Geralt and Vesemir. In his youth, Geralt would train along with Witcher hopefuls Gascadin and Clovis. Their trainer? None other than the red-haired warrior called Osbert. Osbert was said to be a strong and loyal Witcher, until Geralt knocked him off his horse and he broke his sword arm. From then on, Osbert adopted supporting duties only, and gave the boys off to another trainer before they ultimately ended up training with Vesemir. Sadly, apart from featuring in only a couple of chapters, this Witcher never made an appearance in the games.

While it is true most of what we know about Osbert comes from Geralt’s youth, I would love to see a much older Osbert still hanging about at Kaer Morhen. I would love to see how Geralt’s actions and the breaking of his good arm affected Osbert, and how he changed into a Witcher. I feel the series adaptation can be as creative as they like. I also mostly just want to see Game of Thrones actor Kristofer Hivju be all sour yet contemplative with Geralt and the gang.

There you have it, folks. While these are the top 10 Witcher characters we would love to see in Season 2, there is undoubtedly hundreds more. Who do you want to see in The Witcher Season 2, and which actors would you have fill their roles? Let us know!