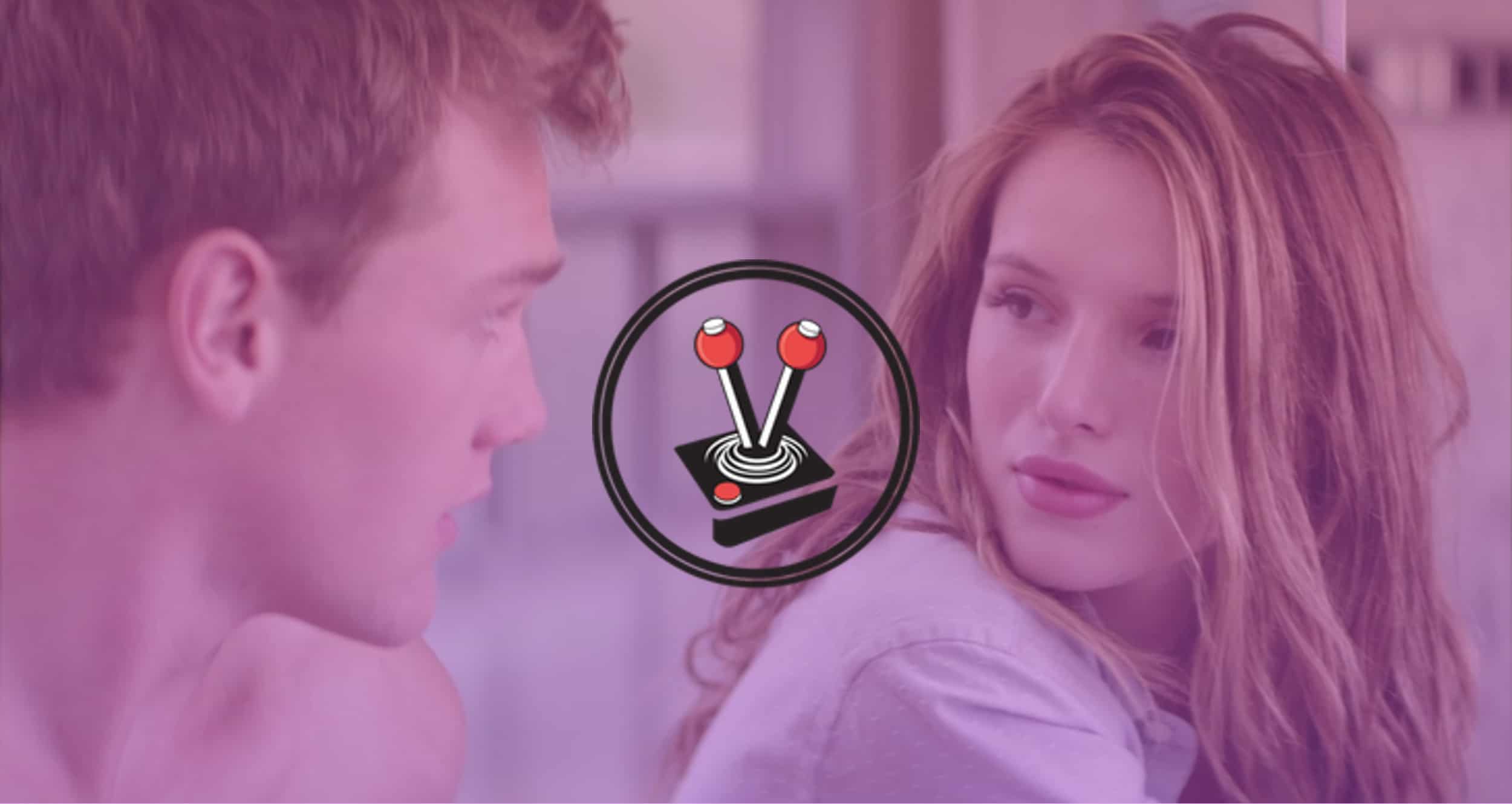 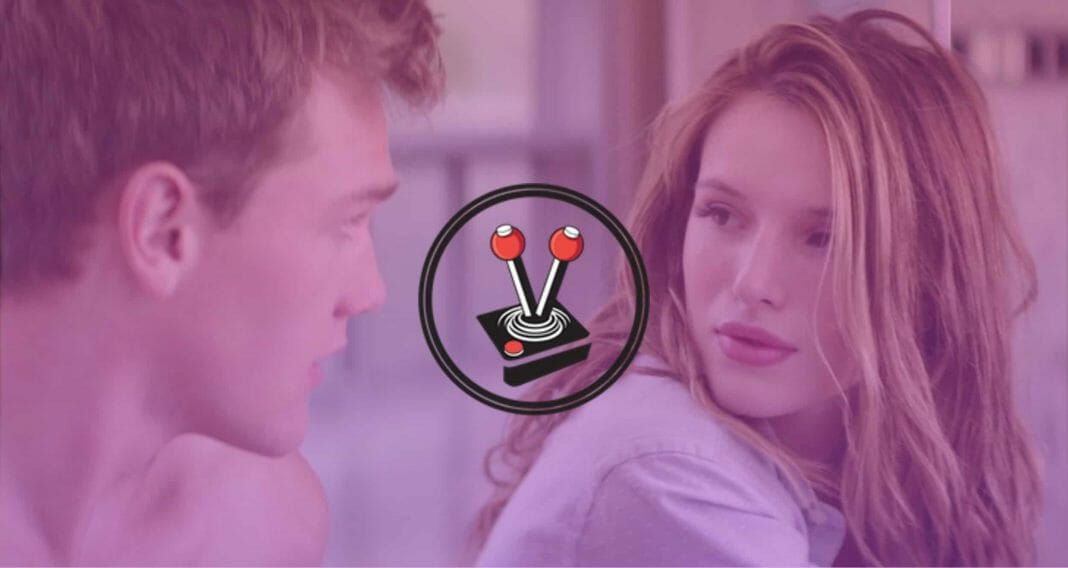 English playwright, William Congreve, created the adage “hell hath no fury like a woman scorned”. That feeling of betrayal turned obsession is at the core of Netflix’s 2017 thriller, You Get Me. Unlike the highly memorable adage, however, this teenage melodrama is instantly forgettable.

You Get Me (2017) starts off with a lot of promise. As the film begins, viewers are introduced to  the very attractive Tyler Hanson (Taylor John Smith). He is a young man who appears to be a model student, has a good group of friends, a steady girlfriend, and is a doting brother to his little sister. His father is out of the picture, and he naturally fills the void within the family. He is the archetypical good guy, who works hard to keep his life together. Naturally, he is an ideal boyfriend to Alison Hewitt (Halston Sage), who drags him to yoga and forces him to drink pink berry smoothies – you know, stereotypically non-male activities.

Before long, the film changes pace and thrusts the young couple into an ‘end of summer’ party. Here Tyler meets a former acquaintance of Alison, who brags about having bed the formally sexually active party girl in San Francisco. Tyler, who has been respecting Alison’s choice to not consummate their relationship, then becomes overly emotional at the revelation that his girlfriend had former lovers, and irrationally decides to drink away his sorrows. He then confronts Alison about her past, and the two have a falling out that leads to a breakup. Immediately thereafter, Tyler catches a lift home with a beautiful party goer that he met earlier. It is at this point in the film that the third major player is introduced, Holly Viola (Bella Thorne).

After leaving the party, Holly treats Tyler to an experience at a night club that he will not soon forget. He then accompanies her home for an undefinable amount of time whereby the two characters binge in multiple sessions of sex, share intimate details of their lives with each other, and confess that they may have ‘something special’. I might add that this part of the film plays out like a 25 minute long music video, complete with several excellent song choices, with each musical interlude only broken up by a few lines, here and there, of cringe worthy dialogue.

Tyler eventually ‘comes to his senses’ and predictably calls it a day, thanks Holly for the great time, and moves on with his life. He then makes up with ‘briefly former girlfriend’ Alison, but naturally does not tell her about his recent tryst with Holly. The web of deceit begins to unfurl.

With summer over, the first day of school arrives and with it the first of many expected twists. Unbeknownst to Tyler, one of the new student transfers is none other than Holly. However, before the shock can settle, Holly is now a part of his friend circle – having recently become close friends with Alison. As the adage goes, ‘keep your friends close and your enemies closer’; and Holly knows exactly how to play the game. At this point in the film it is quite clear that Holly is not willing to let her ‘summer romance’ be forgotten. It is also the moment in You Get Me where the story and narrative exposition begin to unravel.

You Get Me, for the most part, follows the familiar narrative tropes seen in films like Fatal Attraction (1987), The Crush (1993) Swimfan (2002), Obsessed (2009), and The Boy Next Door (2015), to name a few. Sadly, very little is done to set the film apart from from its forbears and it highlights how the script is the weakest element of the film. Although the film does feature some genuinely excellent cinematography that wonderfully highlights Los Angeles and Santa Monica’s gorgeous scenic views, these scenes are lost to the void of the tepid narrative exposition that fails to adequately build up Holly’s obsession with Tyler, and his subsequent inability to deal with the repercussions of his actions.

To its credit, You Get Me starts off strong by offering some believable depictions of millennial culture. Alas, it quickly loses focus when the realisation arrives that these are teenagers, and not twenty-something young adults. Naturally, when Holly begins to insert herself into Tyler’s life – a crucial element to any jilted lover’s narrative – the suspension of belief is quickly grounded by the high school setting. From this moment onward, the story’s yarn begins to quickly unravel.

Not only is it made very clear that Holly has stability issues, but her descent into madness is so uncouth that it became incredibly hard pressed to not roll ones eyes at every foreseeable action that she took to harm both Tyler, and eventually Alison. From the sure-fire “I’m pregnant” and “he beat me” tropes, through to other psychopathic tendencies, like obsessing over trinkets, photos and appearing ‘out of nowhere’, all the way through to murder – there really was no end to the extremities that Holly would go to for vengeance in You Get Me.

Despite some decent performances from Bella Thorn as the unhinged and fiery Holly who is out for literal blood, to Halston Sage as the calm and collected former party girl, and finally Taylor John Smith as the fairly likeable male lead who is drawn into the psychotic melodrama of his own doing; there are moments where the incredulity of what is being said, coupled with the sheer craziness of the situation, that completely deters viewers from engaging with what could be a decent teenage thriller.

You Get Me has many flaws. With that said, it is the kind of film that is worth putting on during a slumber party; one with lots of wine and popcorn, and where the viewers are not going to be invested in the story. The kind of evening where people are encouraged to talk, discuss, laugh and grip their popcorn in disbelief at how the psychotic narrative unfolds.   For everyone else, the ludicrous dialogue, over-the-top acting and utterly predictable plot relegate You Get Me to the corner of Netflix that is only worth visiting if you really have nothing better to watch.