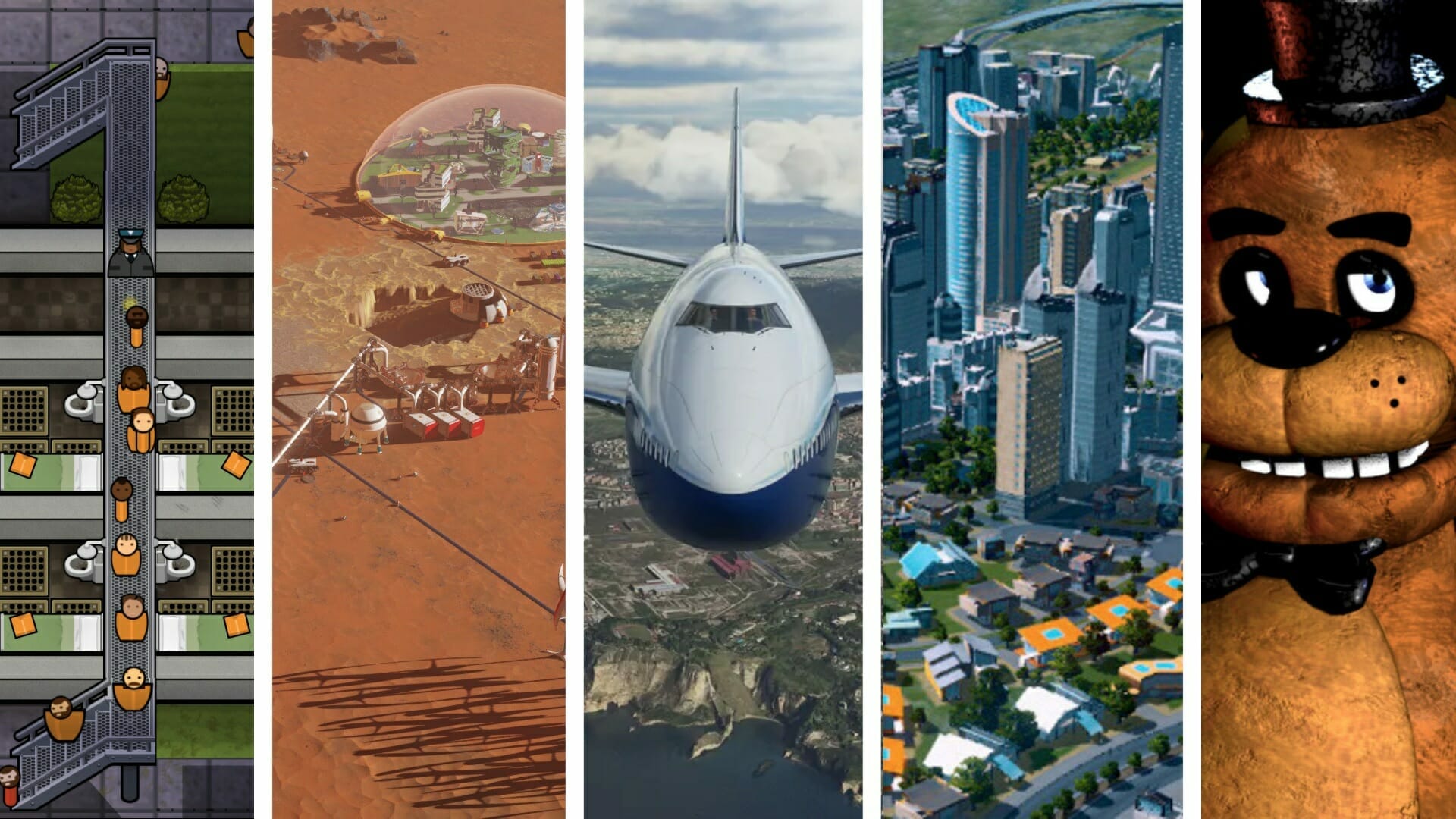 Harvest Moon: One World suffers from disappointing game design; where interesting concepts and cool ideas become muddied by farcical randomisation of necessary items and a generally uninteresting aesthetic. The greatest issue of all, however, is the fact that it is marketed as a simulation game. One of the biggest misconceptions about simulation games is how they have to simulate real life as accurately as possible. Due to this, many video gamers (myself included) have often overlooked titles carrying the simulation moniker. As a result, Harvest Moon made me wonder if there are hidden simulation gems out there to help scrape the bad taste One World left on my tongue. With this in mind, I have collected a list of 10 Game Pass simulation titles worthy of your time (and all better than Harvest Moon: One World).

As a gamer, I have an extensive library of games – some of which bear the simulation title proudly [a fact that I have overlooked since many really do not feel like simulation games]. As a proud – yet reformed – member of the PC Master Race, I also have the Xbox Game Pass library at my disposal. Simply put, it is absolutely loaded with options for gamers on console and personal computer. The service is also filled with so many simulation titles that it overshadowed my measly little Steam library. As such, the titles below are not only guaranteed to be 100% more entertaining than Harvest Moon: One World, but also available to anyone with an Xbox, a Windows 10 computer, or an Android device (soon to come to iOS as well) – ensuring that it is open to almost anyone and everyone. At least one of these Game Pass simulation titles will be sure to satisfy that sim itch!

Microsoft Flight Simulator has always been the go-to title for gamers who dreams of flying, whether virtually or otherwise. In the newest instalment (which is conveniently available on Game Pass), players can take one of a plethora of planes, and go pretty much anywhere in the world. The game is beautiful as well, so eye candy hogs will have a good time with this one. Microsoft Flight Simulator is also an incredibly in-depth simulator that actually goes into real-life mechanics and hardware pertaining to flying.

Administrating a hospital can be a tricky business. I know what I am saying because I have seen Grey’s Anatomy and read something on Tumblr. In Two Point Hospital, you can skip right past the trivialities making the job a chore, and get right to running the establishment like it is nobody’s business… except your own, of course. What sets Two Point Hospital apart from the others is how it owns its wackiness. So much so, that it even doubled down on it and implemented it into the gameplay. Patrons to the establishment now have all kinds of ailments, all of which look pretty much how they sound. In terms of Game Pass simulation titles, the controls work really well with a controller too.

Since it is 2021 already and humanity does not yet have colonies on Mars, the next best thing would be to take matters into your own hands, right? Dang right! Surviving Mars lets gamers do just that – it is essentially a city builder (hence the simulation aspect) where the game tasks players with gathering supplies and discovering the deep dark secrets hidden beneath Mars’ surface. It is actually quite a lot of fun, but there are a few challenges that pop up seemingly out of nowhere if players are not looking close enough. Pro tip: sometimes paranoia goes rewarded.

Conquering an entire world is hard work, okay. Doing so in a video game, however, is a little bit easier… stress not withstanding. In Endless Legend, players are in charge of building a sprawling empire. The game is turn-based, and uses a cool hexagon pattern tile system for movement and other actions. Players can choose form 14 factions to start out with, and then carry on to collect resources and build (or destroy) political relationships in the name of the empire. Alliances are an integral part of the system, and while the game can be won without forming any, it is really difficult to do so. What a challenge, right? A huge strategy game like this is pretty much a simulation through and through. While there are no in-depth religion mechanics, or super detailed war mechanics and so on, the game delivers just-enough for players to get a taste of every facet of ruling an empire. Enough to earn it a place on this list of Game Pass simulation titles.

We have all been through the process: build a city, make it prosper, then destroy it with a huge meteor and start the process from scratch. Man how I miss Sim City. To fill the gap, Cities: Skylines is here, and it brings with it a plethora of heartwarming gifts make it very difficult to ever let go! In Cities: Skylines, players need to literally make a city grow by adding buildings, roadways, and even making the quality of life nice enough for citizens to grow and prosper. There are also other forms of transport, and a somewhat advanced policies and edicts menu where players can restart certain actions in some areas. The game also has a flip side, where wholly different needs of the city need to be met in its After Dark game mode, along with a whole lot of downloadable content keeping things fresh. It is also one of the more robust games in this list of Game Pass simulation titles.

Remember Prison Break? Sincewatching it in my youth, I have always wanted to both thwart a prison escape, as well as run a prison. Turns out a few decades wait would make it possible for me to do just that! Prison Architect PC is a little simulation title where players are in control of an entire correctional facility… or lack thereof. In the game, players need to build the prison and house the staff it employs. There are multiple game modes: one where you run a prison indefinitely, one where you can orchestrate a prison escape, and even one that allows players to try and escape another player’s prison. The game has a huge learning curve to it, though, with a lot of management that needs to be done. It is not a simulation (and one of the better ones) for nothing.

While the game originally only caught my attention because of a wholly different game that released in 2020, VA-11 Hall-A: Cyberpunk Bartender is a great find. To many gamers, VA-11 Hall-A may look too quirky and weird at first glance, but it is most assuredly worth it. In the game, players need to tend a bar for patrons who are infected by nano machines. Preparing drinks and conversing with the patrons will unlock more story paths and eventually lead up to great endings. The game apparently has a whole bunch of endings, so it is more than worth the replay-ability as well!

If you have ever played FIFA, PES, or any other video game based on the beautiful sport no one can really put a name to (it is soccer, sue me), you will undoubtedly have wondered what it may be like to make the decisions that govern a successful team. In Football Manager 2021 you can do just that! Football Manager is as involved as you might imagine, and it does not hold any hands. From hiring staff, drafting players, and finding new sponsorships, through to giving inspirational speeches between tours, you have to do it all. You are the Football Manager after all.

Rise of Nations: Extended Edition is perfect for anyone with a bit of a history bone in their body, while it also serves enough fiction to keep the intrigue flowing. It is also very much a super simulation with strategy all baked into a single package as players lead one of 24 factions to victory against invading forces. Of all the entries in this list, Rise of Nations feel the most like a classic Command & Conquer game, so there is that. You know, since Electronic Arts pretty much put a shotgun to the head of that franchise.

Who says that simulation is not allowed to be scary? Not the creators of Five Nights at Freddy’s! In this game, players take on the roll of a newly appointed security guard. The task is to make sure the animatronics of the restaurant do not escape the premises. One hour in, and players quickly learn that they have no intention of escaping at all – they just want blood. Players need to manage power (is this South Africa?), while checking the cameras in order ensure the animatronics stay far away from the security booth. Survive five nights and the game is over. There are five games on Game Pass so far, and the rest (or future) titles will surely be coming to the subscription service in future.

From sitting and vibing with a bar full of nanomachine coffee lovers, through to holding the door against creepy animatronic animals, Game Pass really does have it all. Sadly Harvest Moon: One World just does not cut it as both a simulation title, or one where fantasy elements come into play. A shame, really, considering it does come from a long line of successful video game titles. Regardless of what we think, however, one thing is certain: anyone with a knack for video games will find a lot of solace in the subscription service, and who knows, maybe one of these 10 Game Pass simulation titles fills the void!