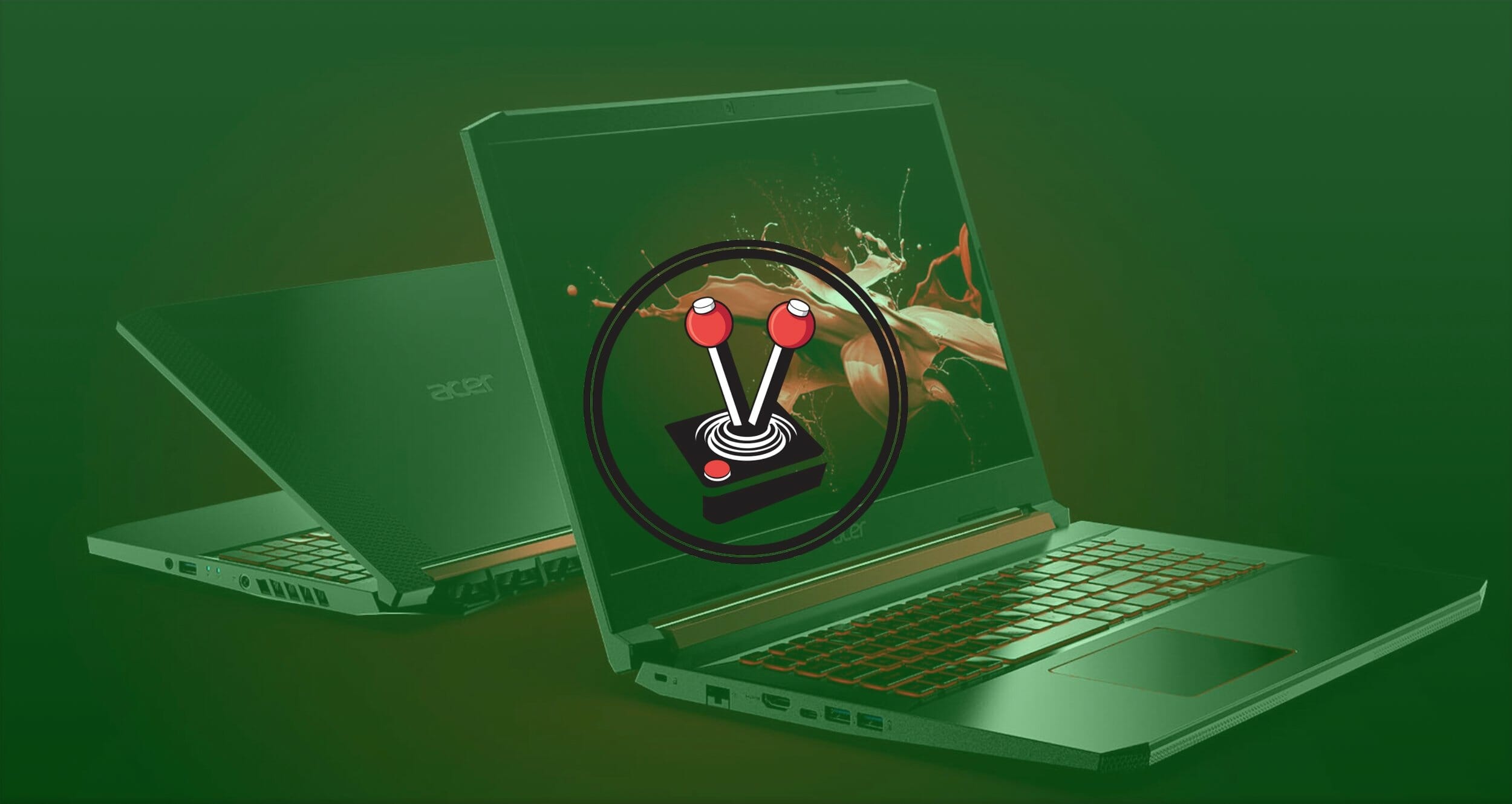 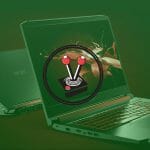 Gaming on a budget is an easy enough feat. However, attempting to allow your budget to peter on the line between ‘budget’ and ‘high-end’, is a much more challenging task to accomplish. This is especially the case if you want to do so while on the go, which is why the gaming laptop market is such a precarious field to wander through.

In the past, major brands like MSI and HP never really bothered with “budget” gaming laptops. Rather, these well-known gaming brands just kitted out workstation laptops with great graphics cards and called it a day. Acer, however, has always been something of an “everyman”. They always make sure their gaming lineups also feature “budget” models. Vamers was fortunate enough to play around with one of the laptops built specifically for the “budget” gamer (or at least one who may have a teeny bit more cash to spend than they realise). Spoiler alert: the Acer Nitro 5 proved to be quite an incredible piece of hardware; small price cuts and shortcuts here and there, notwithstanding.

Acer’s Nitro brand has always been decent looking. Since its inception as a high-tier entry-level gaming laptop (among the Aspire range), it has been Nitro’s goal to be the edgy and futuristic cousin to the rest of the family. Some six years later and this mentality has not changed much. The Acer Nitro 5 now looks pretty much identical to both of its smaller and bigger siblings. Much like the Nitro 5 Spin and Nitro 7, the laptop features a largely metallic (almost brushed aluminium) aesthetic with bold red finishes and flare.

The laptop itself is not too heavy (coming in at around 2.5kg), it does feel robust and sturdy. This is thanks in large part to its metallic frame and hard plastic shell. It makes the Acer Nitro 5 feel premium and worthy of its price tag. To make it even better-looking, Acer tried to make its bezels as thin as possible while still maintaining a full-HD IPS LCD. It is understandable why the laptop only features a full-HD display and one with a refresh rate of just 60hz. However, I cannot help but think how a 144hz panel would have made it a much more lucrative device. Be that as it may, the panel itself is beautiful and largely free of reflection and/or fingerprints.

The aesthetic of the thin bezel around the screen also extends to the body, which has been built to have as small of a footprint as possible. All while remaining large enough for the heat to dissipate easily throughout the device. This somewhat tinier footprint means Acer had a lot less space to work with compared to previous years, and even compared to some of the brand’s much more expensive laptops. Of Course, this did not deter Acer from trying their darndest to include a full-featured keyboard either – a huge step up from many tenkeyless boards featured in other laptops.

I must note how the keyboard itself is quite robust. Keys are nice and thick and have quiet falls with quick accentuations. Their size alone helped immensely in keeping them from burning my fingertips off during longer gaming sessions – a little experience I had to go through with a previous Acer laptop. With that said, I must mention how it still became quite hot to the touch after long periods of gaming. Even this new laptop is not immune to the monstrous heat generated by gaming hardware.

Another great feature about the laptop’s design is how the Acer Nitro 5 boasts a hefty bit of input/output! In particular, the Nitro 5 features a single USB-C connection, two USB 3 Type-A connections, and a single USB 2 slot on the opposite side. It also has a single HDMI 2.0 port and an ethernet port for wired connectivity. Naturally, the laptop also features a slot where the charger connects. The on/off button sits with the rest of the keyboard keys, at the top right. I will admit that I am not entirely sure where the speakers are in the machine. All I know is they are clearly stereo speakers, and they sound great – particularly for speakers located inside such a thin body of a laptop.

Judging solely on aesthetics, the laptop may be considered a “budget” gaming laptop. On the inside, however, it is very much a different story. On the surface, the hardware sounds great, and it is for the most part. Understandably, there had to be some cost-cutting here and there to allow the unit to fall within the ‘budget’ segment of the market. The model Vamers received for review boasts an eighth-generation Intel i5 8300H; a 128 GB NVMe drive with an added 1 TB storage drive; 8 GB DDR4 random access memory (RAM), and a full-fledged Nvidia GTX 1650 with 4 GB of memory. Impressive, right?

A super-fast NVMe drive is always a nice addition to any build, while a desktop-class graphics card helps a lot with processing and rendering. My issue, however, lies with the fact that Acer opted for an Intel i5 8300H rather than the newer ninth-generation Intel i5 9300H – which retails for around the same price. Similarly, I would have liked to see an additional 8 GB of RAM for a total of 16 GB in the base model. The reason for this is because many modern games have a recommendation of 16 GB for high to ultra graphical settings. Minor qualms aside, the Acer Nitro 5 is a great budget gaming laptop.

During my time with the laptop, I played both PlayerUnknown’s Battlegrounds (PUBG) and Guild Wars 2. PUBG can admittedly run on a potato with default settings. On ultra, however, it can be taxing. In my experience, and often with the highest of settings at full HD, I managed to squeeze an average of 40 frames out of it almost all of the time! I did experience a small amount of hitching whenever the CPU maxed out every now and again – like right after I loading into maps. Guild Wars 2, on the other hand, is notorious for being badly optimised and being CPU-intensive. During my time with the game, I had a steady 60 frames (with everything on ultra except player model count, which was set to medium), and it was generally smooth sailing. However, every so often, I would notice how the CPU maxes out at 100% utilisation, and the laptop would hitch quite badly for a second or two. I understand the hitching is due to the CPUs “mobile” or “laptop-class” nature. Whatever the case may be, the Acer Nitro 5 should be able to handle most games at high to ultra without issue. At least for now.

Naturally, you cannot just boot up a laptop and have it work right out of the box (unless you are an Apple user, of course). When started for the first time, the Windows 10 setup process will start. Once you are set up and running, you can begin to customise your system. However, I have to stress how the review unit did not include Nvidia Geforce Experience out of the box. I recommend you download it as soon as possible to ensure the best gaming experience.

Unfortunately, like many branded laptops, the Acer Nitro 5 does have some extra bloatware by default. It also has a super tacky Acer boot screen with unique noise. In terms of the extra software, I did not use any of them (since they come pre-installed on ALL Acer devices), except the software that actually matters for the laptop in question: Acer Nitro Sense.

Nitro Sense is for all intents and purposes just Acer Predator Sense Lite. From the onset, you are prompted with a fancy-looking user interface showcasing the device’s current stats. From the first screen, you can see the temperatures for the CPU and GPU. Three buttons on the left side of the screen let you switch between the Nitro Sense’s automatic mode, where it selects everything for you; “Max”, which lets all fans work at their maximum speed and activates the GPUs boost; and “custom”, a profile that lets you control everything yourself. The CoolBoost option on the top-right is a cool instant-cooling feature that bumps the speed of all fans ever so slightly, while setting the overclocking profile to normal.

Whether you use the Acer Nitro 5 in its fancy CoolBoost mode, or whether you max the GPU, this is still a laptop and you will need to be cognisant of the battery life. As such, it is only natural to want to know how long the battery can last for. Unfortunately, the battery is not great. Acer advertises around 8 hours of battery life when doing daily tasks, while gaming will bring it down to around 4 hours. In my testing, however, I only managed 2 hours of PUBG before the Nitro 5 threw up a 10% warning.

I can understand how gaming is not something you should do whilst battery powered anyway. However, this is a gaming laptop and it should at least mean a bit more for the battery than what I managed to get. I must also mention how the charger included with the laptop is not strong enough to keep the battery at full charge during long gaming sessions either. Honestly, it is one of the most baffling aspects of the laptop. While you can pretty much game indefinitely, I always noticed how, after around two and a half hours of gaming (my usual nightly venture), the battery would have dropped from 100% to around 85%-90%, all while plugged in. It boggles the mind.

The Acer Nitro 5 is a good gaming laptop. It may have oddly specific hardware limitations, but these are largely due to its “budget” and financially conscious nature. The hardware still works, and it works quite well. The laptop also looks great and features a nice screen that has a lot going for it. I particularly like its keyboard, because it did not once burn my fingers and it also features a great sounding set of speakers. Perhaps the biggest issue is the strange battery drain – my guess is this is because of an eco-friendly charger? Either way, as long as it is plugged in, you can essentially game all day.

According to Acer, the Nitro 5 will be available later in December 2019. A specific recommended retail price is not disclosed as of yet, but you can expect it to be around R14 000, if last year’s model is anything to go by. While that does seem pricey, it is actually quite good considering the mobile nature of the product. It may be a subjective opinion, but I think the Acer Nitro 5 is “budget” gaming on a laptop, done right.