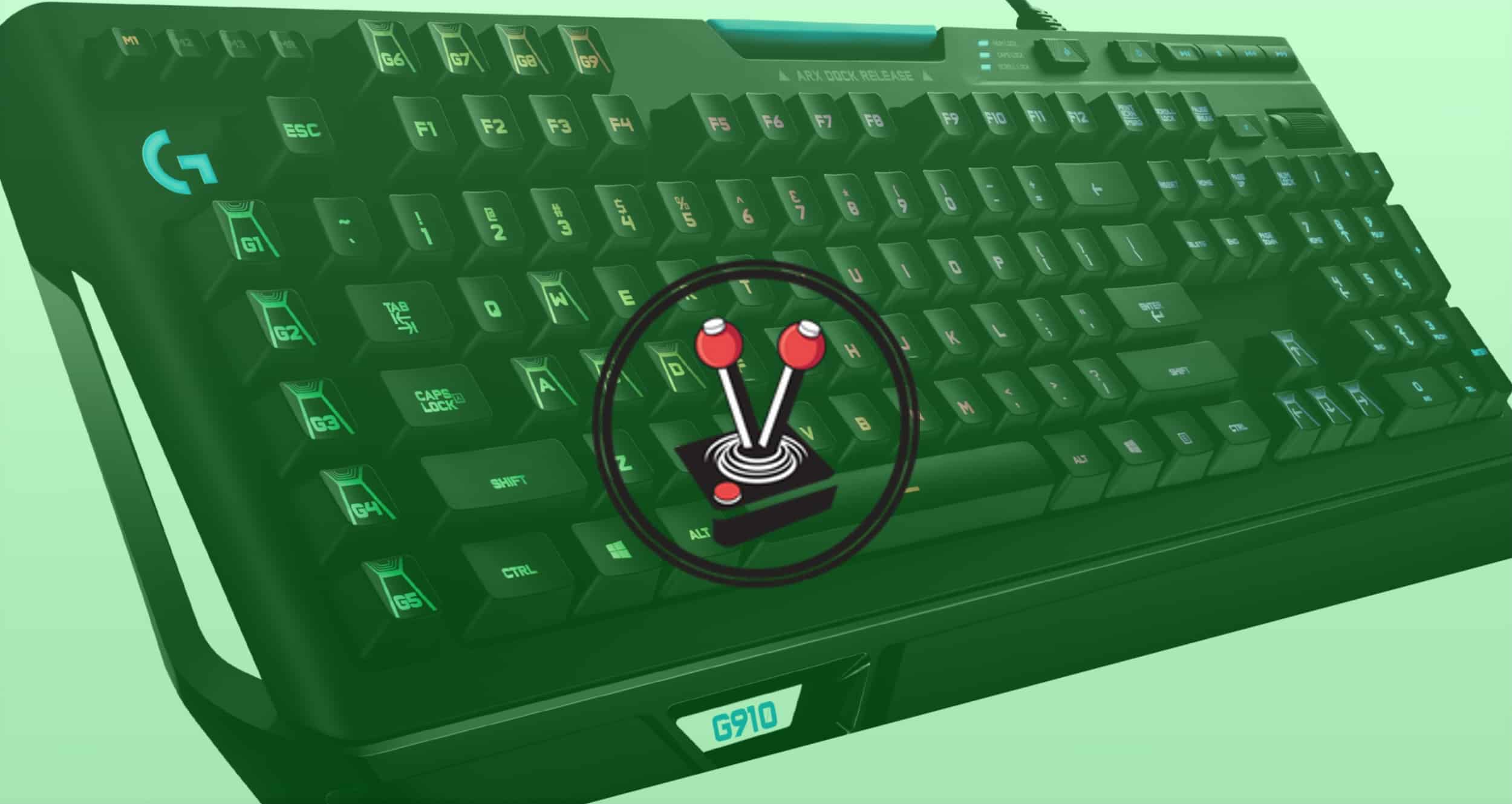 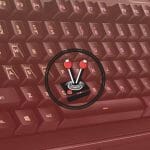 Logitech might be one of my all-time favourite peripheral makers. I have been using the brand’s peripherals and hardware for years now, and they seldom disappoint. I have previously had the privilege of reviewing their newer gaming headsets, like the G433 7.1 surround sound gaming headset; and keyboards like my personal daily driver at the time, the G710+. Hans was also mightily impressed with the Logitech Wonderboom. With that said, I have now had the opportunity to review the Logitech G910 Orion Spectrum keyboard.

First and foremost, believe me when I say that Logitech has been taking big risks with their newer keyboards. In the past, Logitech has had a very reserved business model with products made to work very well as opposed to looking flashy. A prime example is the Logitech G710+. However, the company’s latest products tend to feature much flashier designs, all-out, full-range RGB lighting, and more. It also features a brand-new mechanical switch! Have these risks paid off?

While still in the box, Logitech presents you with nothing but the keyboard, its cable, and some documentation. That is literally it. Nice, clean, and simple. Out of the box however, and the simplicity melts away to reveal a flashy design with a matching wrist rest and a very robust build. As opposed to the design changes between the G15 and then the G710+, the G910 is more inline with what we have come to expect from the company. When compared to the G710+ in this case, it is all about the actual design, versus the move from normal domed keys to mechanical keys.

The keyboard itself features a broad set of media keys. There are also five “G-Keys” that allow for macros on just about every program imaginable, but that is not all. There are also four profile keys for said G-Keys, which increases the total number of macros the keyboard provides to twenty. It also has a wrist rest with a very futuristic design — the only problem one might have is that the wrist rest is completely plastic. The plastic rest is almost in stark contrast to the hardy design the rest of the keyboard features. While it is still predominantly plastic, the keyboard does not feel plastic. By contrast, it feels like a robust compound. On that note, it also has a beautiful matte finish with gratuitous displays of shiny plastic bits strewn about. 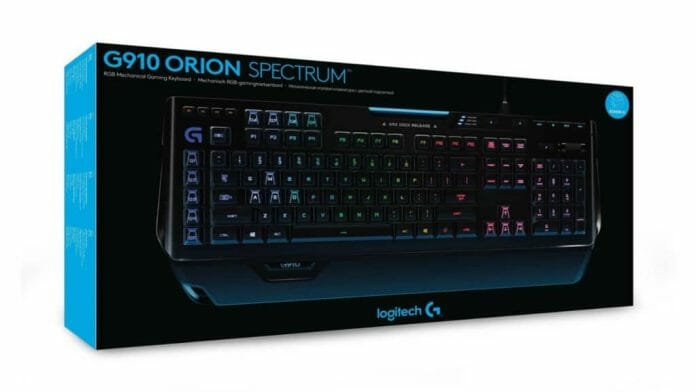 The matte finish is a definite plus. It not only feels good, but it also keeps smudges and fingerprints to a minimum. On the front of the keyboard, there is a bright blue cutout. At first, I was not sure what it was for. However, pulling on the silicone and plastic cutout reveals a dock! Yes, the keyboard even features a little dock for your phone – one that was spacious enough to fit my plus sized iPhone.

In terms of keys, Vamers received the US/International version with the standard 104-key ANSI layout. The keycaps themselves are also normal caps, as opposed to the G910 Spark before it. Where the Spark had fancy keycap designs, the Spectrum proves that Logitech is, to a degree, playing it safe(ish). The WASD and Arrow keys do feature special designs on the aesthetic level, however. This allows the keyboard to look all fancy without sacrificing the tactile feedback users have become used to. The same pattern extends to the G-keys, and the memory profile keys.

Underneath the keys is where the keyboard wildly differs from competing mechanical keyboards. The G910 Orion Spectrum features Logitech’s proprietary Omron Romer-G mechanical switches. They are very tactile and very quiet — even quieter than the G410 that I am currently using (watch out for that review). The Orion Spectrum’s keys have an actuation force of 45 grams. To actuate it, you have to press it down with a certain force. the Romer-G switches are perfectly balanced so you require little to no effort, while still getting that feedback and reassurance that you actually pressed the key. For folk that bottom-out their keys (like me), this would not be an issue at all either, since they pop right back up as quickly as you slam them into the keyboard base. The keys also feature an actuation distance of 1.5mm, which means that you do not have to bottom-out the keys to activate them anyway. 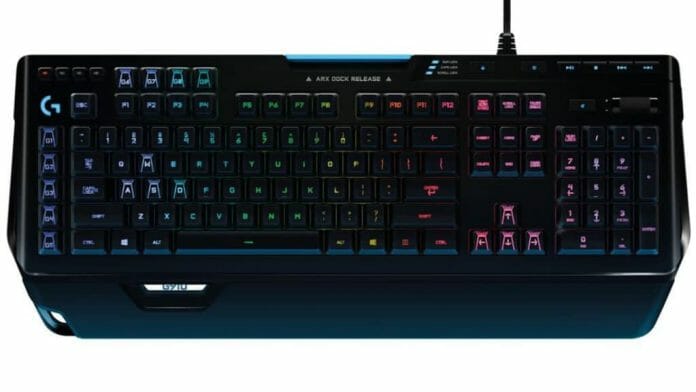 With Romer-G, the LED lighting is installed in the center of the mechanical key, which allows for the lighting to only shine through the key, and not light up the entire keyboard in-between the caps. All larger keys features small supports that looks a lot like Cherry-MX connections. This is nice, as other keyboards I have used and tested usually have those metal supports that tend to deteriorate over time.

The keyboard also features a full set of media keys. It has the stock play and pause buttons, a stop button, forward and backwards skip buttons and volume buttons. It is a full set of buttons that feel nice when you use them, and which, at least in the two to three weeks of testing that I have done, did not lose any tactile feedback. It also has a dedicated “Gaming” key that disables the windows keys by default. Using the Logitech G Gaming Software, you can customise what the Gaming key can disable. While I am not sure whether this is a feature introduced with the Orion Spectrum, it is definitely nice to have. Especially when compared to the G710+ and G15, which do not allow for that customisation.

In terms of connectivity, I must confess that I expected the keyboard to have a braided cable. Rather, it has a normal plastic cable that connects to your PC or Mac. Fortunately, the cable is thin and very lightweight. It does not get in the way of cable management at all, which is a big plus. Even so, I prefer the thicker feeling of the G710+ cable because of its robustness. While the same feeling did not extend to the G910, I do not feel it lacks in any regard.

Unlike previous keyboards in Logitech’s lineup, the G910 no longer has a built in screen. At first glance, this may seem like a con; but then you realise that the aforementioned ‘dock’ does have an actual purpose. Using Logitech’s ARX Control mobile app, in conjunction with the Logitech G Gaming Software, allows you to see details about the games you are playing, your computer’s stats and spec, as well as media functions, all on your mobile phone using – you guessed it – the blue dock. Well, you do not have to use the dock, because the mobile phone just needs to be connected via local network, but that is a definite plus and eschews the need for a built in screen. 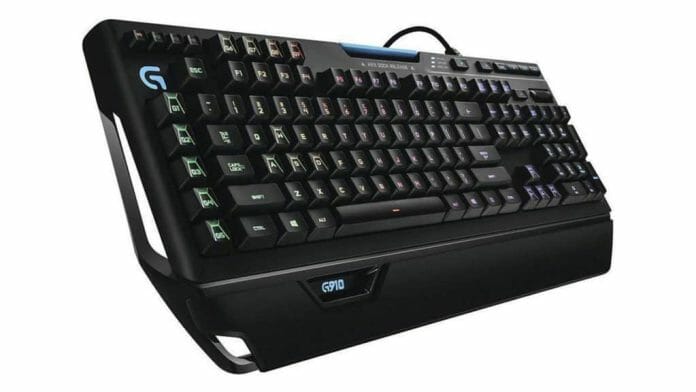 Furthermore, it goes without saying you will get the most out of the keyboard, if you use it with the Logitech G Gaming Software. The software is available for both Windows and Mac, and allows you to set up profiles for multiple programs including games, and professional software. Personally, I use it for Scrivener, which I write with, Google Chrome, as well as the many games I play.

The G910 Orion Spectrum has it all. It features up to 20 macros, an incredible set of Romer-G mechanical switches, which I personally love; and a robust, strong design and build. With the ARX Control functionality and Logitech G Gaming Software, it is a fully featured beast that also looks pretty dang neat.