Some good new for fans of the Mortal Kombat series and owners of the latest incarnation of the game. NetherRealm studios have announced that the Klassic Mortal Kombat 3 skins for both Sektor and Cyrax will be bundled in the upcoming compatibility DLC for the game (all platforms). The best part? The skins, along with the compatibility pack, will be absolutely free.

For those who do not know, this free compatibility pack is being released in order to allow all online gamers to be able to play against Mortal Kombat’s newest character, the mysterious Skarlet. Not much is known about Skarlet other than the fact she is a never before seen character from the Mortal Kombat universe created especially for the latest game. 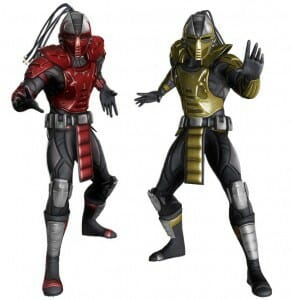 The Skarlet DLC alongside the compatibility pack are scheduled to be released on 21st June 2011 – just as the winter solstice hits. Also, don’t forget that Rain, Kenshi and another illusive character are already confirmed to be coming soon via DLC.