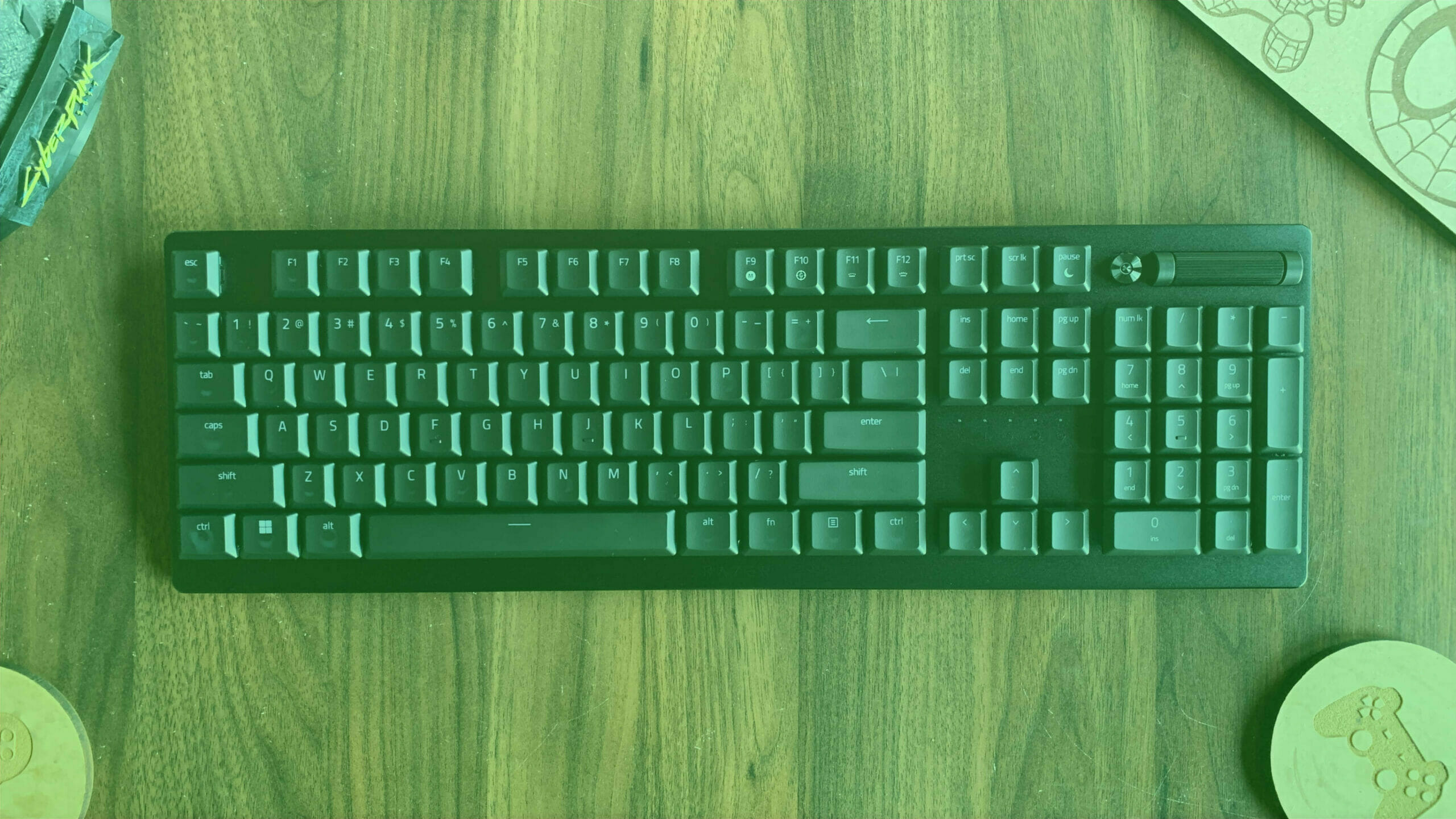 Keyboards are often overlooked in the sea of headset, mouse, and other accessory options. Those who do seek good video gaming keyboards are often beset by the likes of Razer BlackWidow and Huntsman lineups or perhaps something from Logitech. Gamers will be hard pressed, however, to look past the recently revived DeathStalker lineup, starting with the charmingly elegant Razer DeathStalker V2.

As is par for the course, the V2 in the Razer DeathStalker V2’s name denotes the second iteration of the iconic keyboard line. Beyond sharing the name, however, Razer have practically redesigned the now-ten-year-old keyboard with renewed focus on premium elegance. In short, it is a full-size 144 key, low profile keyboard with hybrid optical and red mechanical switches.

The Razer DeathStalker V2’s extremely low-profile design is immediately noticeable. It screams “luxury” in the most utilitarian term. The keyboard features razer-thin keycaps with an actuation distance of just 1.2mm, a brushed aluminium faceplate with a hard plastic backplate, a dedicated media play/pause button, and a volume scroll wheel straight out of the Nostromo (Ripley would be proud). Upon closer inspection, one can also make out the Razer name emblazoned in the centre of the wrist-end of the keyboard, and five white singular LEDs (positioned above the arrow keys) denoting which functions and/or locks are currently active on the keyboard.

All keys are fitted with full-spectrum RG courtesy of Razer Chroma, with the exception of the dedicated media pause/play button. Strangely, the knob-like button appears to have been designed to blend seamlessly into the faceplate, making it quite a chore to find for the first week or so of use. With that said, having the button and volume scroll wheel is a massive improvement in quality of life. Video gaming keyboards generally do not offer dedicated media controls, making them somewhat of a luxury here. The Razer DeathStalker V2 does feature additional function keys, however. These include the Macro switch on the F9 key, the Game Mode button on the F10 key, and the keyboard backlight strength setting on F11 and F12. To use these keys, all players need to do is hold the “Fn” function modifier while tapping any of the aforementioned keys. This combination of dedicated and function keys is a nice change of pace when compared to many keyboards that adopt an “either or” mentality.

As far as keyboards go, the Razer DeathStalker V2’s “uniqueness” only truly comes from how it looks. It truly is a beautiful and elegant piece of machined aluminium and plastic. In terms of connectivity, it features the standard USB-C to USB-A braided Razer cable. It has no USB passthrough, meaning gamers must commit to losing a USB slot when attaching this bad boy to their rigs, but it is a small price to pay. Razer also claims how all keys are coated in a special scratch-resistant coating called Razer HyperGuard, making them “ultra-durable” for long haul ownership. Sadly, it does not come with a wrist rest, which is a right shame considering how this addition would totally have set the bar for what to expect from a “premium” and “luxury” peripheral.

The N-key rollover technology implemented in the keys is wonderful, to say the least. Playing any title, from PUBG: Battlegrounds and Escape From Tarkov, through to Uncharted: Legacy of Thieves and Marvel’s Spider-Man, showed no signs of ghosting or dual inputs. Chances are gamers will never want to go back to traditional mechanical keys when coupled with the superior optical switches featured in the Razer DeathStalker V2.

There are two switch types available for the Razer DeathStalker V2: blue (tactile), or red (linear). We received the red version for testing, which, according to the manufacturer, has been fine-tuned to balance typing against noise. The red switches are linear, which means they do not have an additional bump that “clicks” when actuated. If history is any indication, “clicky” switches tend to feel more crunchy. To this end, it must be said how these linear switches feel kind of spongy when pressed. While not at all a bad thing, it is something to take note of. Neither crunchy, nor spongey, is not necessarily a feeling gamers might want to feel. The best bet would be to try them in store before purchase.

Furthermore, and thanks to the keyboard’s integration with Razer’s in-house, and proprietary, software suite; prospective owners can set up different kinds of profiles for different applications and programs. The keyboard utilises a breathing effect for its full-spectrum RGB and backlighting, but this can also be edited in seemingly countless ways via Razer Synapse 3. Players who would rather not use Synapse can also take advantage of the keyboard’s on-board profiling, of which a maximum of five profiles can be set up. Thanks to the USB connection, the keyboard will always be ready via plug-and-play, and thanks to on-board memory, it will retain any RGB and macro settings set up beforehand.

The Razer DeathStalker V2 is one of the most elegant-looking keyboards available to gamers. It rivals the likes of the Logitech G815, and stands on its own as the new flagship Razer keyboard to beat. It features optical switches which, albeit quite spongey, require next to zero effort to accentuate. The N-key rollover is also legendary compared to other keyboards, and its new scratch-resistant coating has ensured that the keyboard remains pristine, even through the two-week review process. While it only works when connected via cable, the braided nature promotes a clutter-free experience. The only downside of the keyboard is how it does not have its own wrist rest, but that is truly a minor inconvenience for an otherwise good keyboard.