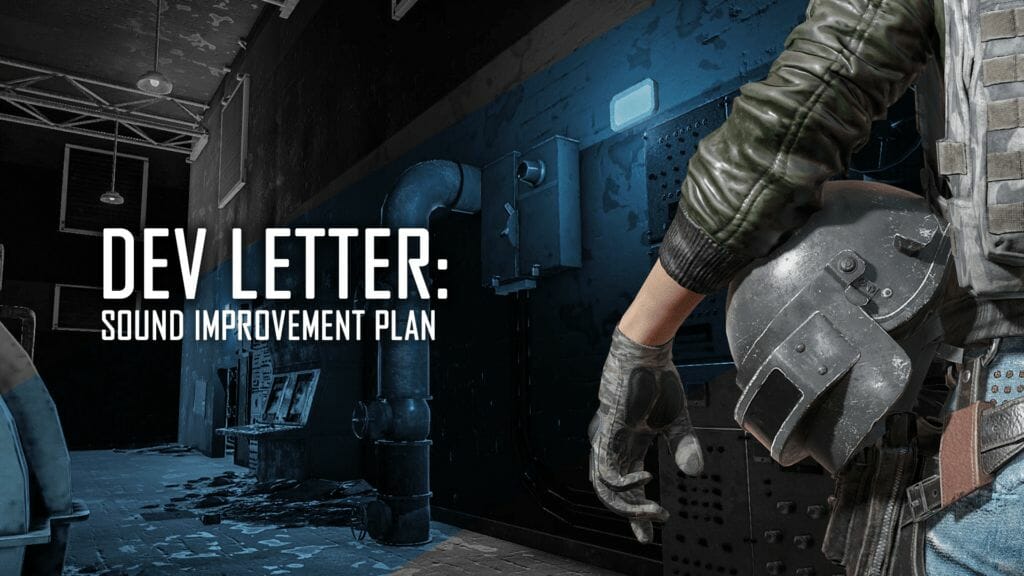 Update notes and development updates contain hordes of valuable information, which often goes unnoticed by the vast majority of players. Gamers may simply skim past patch notes after every major update, or perhaps the developers themselves do not bring enough attention to the situation remains to be seen. Either way, PlayerUnknown’s Battlegrounds and the team at PUBG Corp. have always been transparent on what their plans are for the future of the game. Thanks to a developer letter, we now know of a Sound Improvement Plan. The next series of updates on the PUBG roadmap, and it sounds incredible.

The dev letter notes how sound is, and always will be, an extremely important aspect of the game. It is thanks in large part to quality headsets (such as the Logitech G935 or Logitech G Pro), and good software – not to mention a tiny bit of luck and skill – that players such as myself have received more than the odd Chicken Dinner at the end of the match. This is why the team at the Seoul-based company wants to go back to where the game is rooted, and take its sound for a much-deserved tuneup.

According to Kyungwon Park from the PUBG Sound Team, it is more than appropriate for their 2-year-old title to finally have its sound evolve with current gaming trends. The team will, therefore, look at six main aspects of the sound system in coming months. Namely, player Quality of Life (QoL) regarding sound; gameplay-related sound balance; character animation sound improvements; gun firing sound improvements; vehicle sound improvements; and indoor reverb sound improvements.

Park states that these improvements will come to the game over the next few months, all of which will be in the game by the end of 2019. In particular, players can expect two big sound updates to drop in August, four in September, and a bunch more in the months thereafter.

During August 2019, the PUBG Sound Team will kick off some changes to the player quality of life. The first of these is a new sound toggle that instantly reduces in-game sound. It is adequately called the “Instant Volume Reducer”. According to Park, the Instant Volume Reducer will mitigate the extreme loudness that follows the starting plane, and red zone explosions.

For years, players have had to mute the game completely by using the CTRL+M keyboard combination, just to get rid of overbearing sounds. Instead of losing all sound completely, the PUBG Sound Team wants players to still hear what is going on around them, by reducing certain sounds in the game marginally. Once the update lands, players will be able to use F7 to instantly reduce game volume when caught in the middle of a red zone, and F7 once more to restore the game volume.

Along with the Instant Volume Reducer, the PUBG Sound Team will also introduce a Volume Adjustment Guide. This guide will help players adjust the sound via the options menu to suit their play style.

In the pause menu, players will notice a new Play button next to the various volume sliders. This will playback some of the game’s loudest sounds (such as gunfire, red zone explosions, and plane sounds), and will allow players to adjust the various sliders so that they can get the best sound setups they can.

The two sound updates above may not tackle the problem at its core (with proper rebalancing), but it does offer players alternate ways to get the bad and overbearing sounds out of the way. Both of these Quality of Life improvements will release with update 4.2, in August.

In September, players can expect to see a whole lot of improvements to character motion sounds. These include footsteps, animations, and even red zone improvements – all important factors of gameplay. Of those, the most important aspect is undoubtedly footstep rebalancing, and the PUBG Sound Team is delivering with aplomb.

Currently, players familiar with the game are aware that footstep sounds have a very steady falloff rate. This is not exactly realistic, and neither is it conducive to good professional esport-levels of play. Especially when players with a bit of audio knowledge can easily get the upper hand. As such, the PUBG Sound Team wants to rework footsteps to not only sound more realistic, but also have a much more realistic dropoff rate. They will achieve this by utilising low and subtle volume ranges more effectively.

While the immediate dropoff rate in the distance is by no means realistic, there is no denying that the new curvature of the sound will be an improvement. I am by no means an audio expert, but the PUBG Sound Team does present players with an easy-to-understand graph.

The graph displays how the team wants to rework footsteps to make it easier on audio setups, while also reworking footsteps in such a way to make close-quarter-battles (CQBs) much more intense.

Beyond footsteps, Park states that the team is working on improvements and rebalances for the red zone, player landing (whether by parkour, falling, or parachuting), and ledge grabbing.

Where the August update will help to mitigate the sounds of the exploding red zone, the September update will rework it completely. The PUBG Sound Team is planning on lowering the overall red-zone volume, while still keeping the tactical advantages that the red zone offers in mind. With that said, Park stresses that the team may not be able to adjust the red zone volume too much.

Red zone aside, the Sound Improvement Plan also involves improving lading and ledge grab sounds. According to Park, landing and parkour sounds have always been the same, regardless of the type of terrain players landed on. In the September update, however, different terrain and movement will offer different sounds. Furthermore, players can also expect to hear improvements on how sound travels depending on the strength of impact. This means that players who land on the ground from higher up will make louder sounds. Ledge grabs, on the other hand, will receive fine-tuning and more realistic opportunities, such as clothing scrubbing against walls when players mount them.

Back to the Future

After September, the PUBG Sound Team wants players to know that there are a lot of plans to rework many aspects of the in-game sound. The Sound Improvement Plan includes improvements to gun firing, vehicle, indoor reverb, and character animation.

The team explains how they want to improve the sound of old guns released with the pre-release versions of the game. This means any guns that spawn on Erangel, and perhaps a few others, will get entirely new sound libraries. Park notes how players who do not like the new sounds will be able to switch back to the old ones. I am curious to see how this will affect professional play.

Vehicle sounds and indoor reverb are also a big part of the game and the Sound Improvement Plan is to make them even bigger. Vehicle collision and road noises, in particular, are getting reworked to sound more realistic, while door closing and opening sounds will also be added. Indoor reverb, on the other hand, will get different sounds depending on the room in question, and how open or destroyed it is. This will also tie into character animation reworks where the team will give sounds more detailed categories (with nuanced libraries) for ledge grabbing, and further improvements to footsteps, landings, and the type of movement done beyond that.

Park states how players can expect to see more detailed information as the updates are nearing completion and that the overall goal for the team is to recreate PUBG in a much more modern light. Update 4.2 is rumoured to release in August, with the September update to follow during the first two weeks.