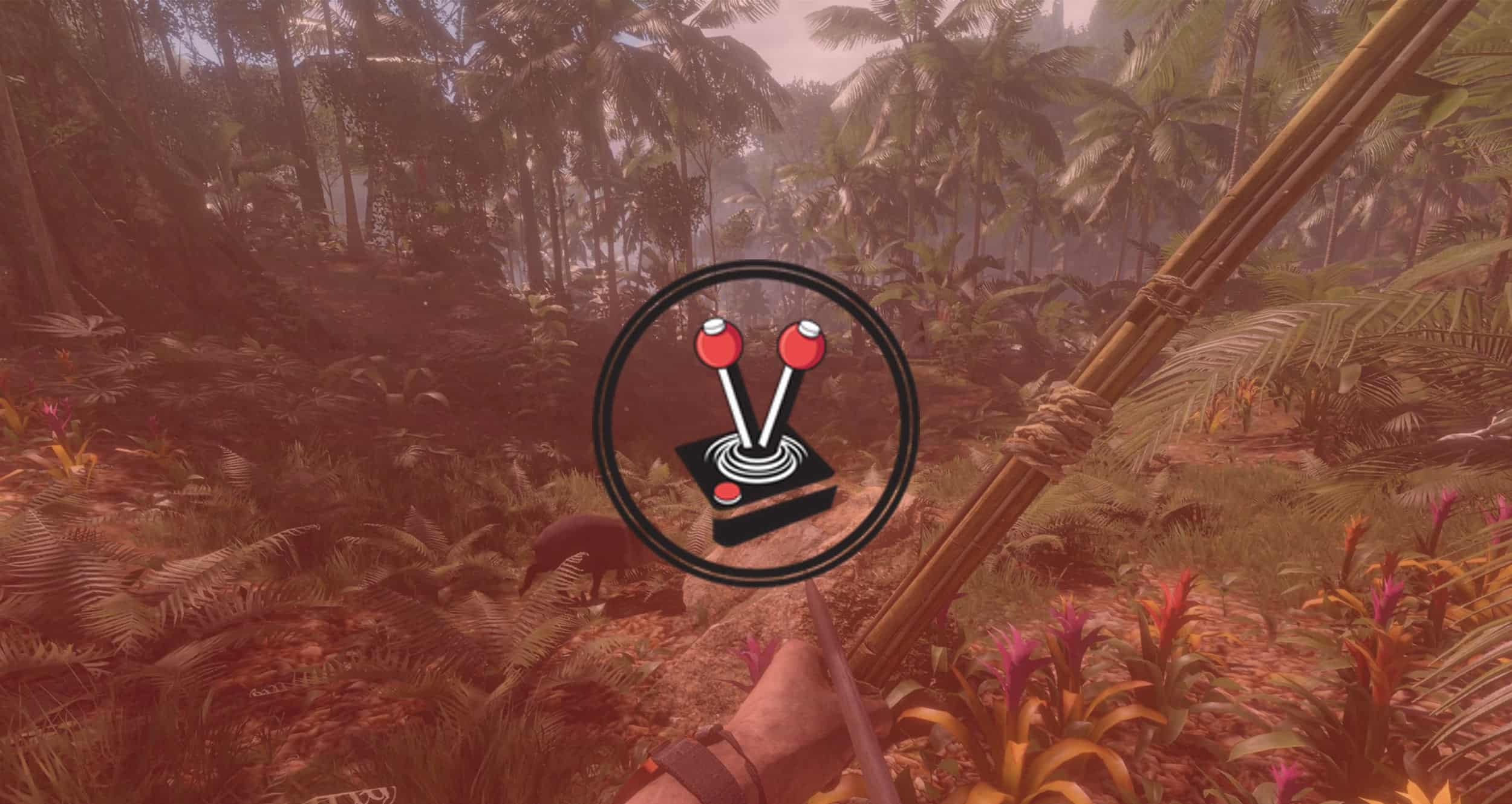 Green Hell is a singleplayer, first-person survival game from indie developer, Creepy Jar. It is set in what seems to be a modern-day Amazon jungle. Considering its Early Access status, the story is light and void of any depth. With that said, the thirty-minute primer the game does give you manages to leave you wanting more as soon as the survival mode kicks in.

From the initial thrill of adventure to the serious undertones and threat from a long-lost Amazonian tribe that does not want to be found, Green Hell makes it obvious from the start that the game will be more than meets the eye… in due time.

As it stands, however, the game offers nothing more than what you would expect from a survival game. With that said, the first few hours of Green Hell did make me very curious on what is still to come. What follows is a written overview of the first six (or so) hours of Green Hell.

While the story is lacking, the game introduces a bunch of concepts at the start. The opening thirty minutes or so acts as a brief tutorial that introduces the gathering, crafting, combat, and traversal mechanics to you in quick briefs that are tied together by a tiny bit of narrative.

In terms of story, however, you first arrive in the Amazon Rainforest along with Mia, a fellow adventurer and colleague. The game quickly prompts you to traverse up a cliff face after which it introduces the Walkie-Talkie to the player. This is used primarily between the player and Mia as she prompts the player to carry out tasks, such as setting up camp, cooking food, and crafting crude tools.

For the first thirty to forty minutes, there is an impressive quality of voice over and text-based instructions. The voice acting, for one, is impressive. It never feels forced, or “phoned in”. The accompanying text and additional information that explains mechanics in more detail are also written in a way that easily describes situations and solutions to the player.

With that said, it all comes to a quick end. Disaster strikes and the story effectively pauses in favour of the game’s bread and butter: a survival mode. It is from here on out that the player must survive as long as they can, with as much knowledge as they can remember from the tutorial that has just passed.

First thing’s first: crafting in this game is both a godsend and a curse. It is perhaps the best implementation of crafting that I have seen in a photorealistic survival game. However, the very nature of trying to keep it as “close to real life” as possible, actually constrains it quite a bit.

Crafting is easy, however. You can craft crude tools or useable equipment by combining items inside your backpack. Recipes are also easy to figure out for anyone who has played any survival game in the past: a single stick and a stone put together results in an axe, for instance.

Another unique element Green Hell features are tiered resources. You can pick up stones from the ground and add them to your inventory. You can also go an extra mile and break bigger rocks apart for small rocks. Similarly, chopping down a tree will not just give you logs, as you would expect from any other survival game. Instead, it will net you with logs and sticks of various lengths – each of which has an entire ‘tree’ of recipes.

Recipes in Green Hell are not automatic either. It is up to the player to figure out what to put together and to know what is needed. Fortunately, once the recipe is crafted, the notebook will update with the recipe so you do not need to remember everything, all the time. As someone who loves to immerse myself in games, I would like for the harder difficulties to only update the notebook once the player finds chalk or something. 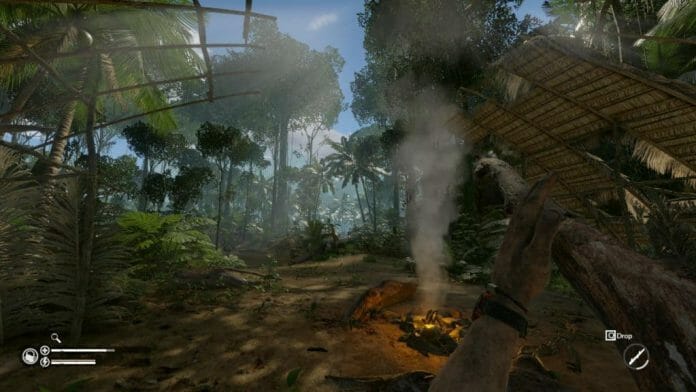 On that note, I must add how intuitive the inventory felt. Many games feature a proper inventory with the usual grid interface, or layered interface featured in Don’t Starve and We Happy Few. Green Hell, on the other hand, features a backpack. Yes, just a backpack, looking as real as the cup of coffee to my right. To top it off, the backpack is not just some featureless window either. Instead, it is a fully functioning backpack with limited space for ropes on its front, sticks that can be tied together on the top, and when zipped open, only so much space to fill. This is an interesting take with an added bit of survival mechanics that I have never seen in other games of this genre.

Getting around in Green Hell is a bit of a chore at first. Fortunately, the jungle does not seem to be procedural (an often over-used mechanic many survival games with little substance resort to), and I appreciate this. The static, pre-designed nature of the jungle makes it easy to learn and get around. While I did not come across a heck of a lot of “landmarks” per se, I did end up figuring out where certain areas were and how far away I might be from my base camp.

With that said, finding my way around was not my biggest issue. Green Hell emphasises realism. As such, there is no warning or sound, or anything when you approach creepy crawlies. Things like snakes, scorpions, spiders, leeches… and I am pretty sure there are hundreds more that I never found. 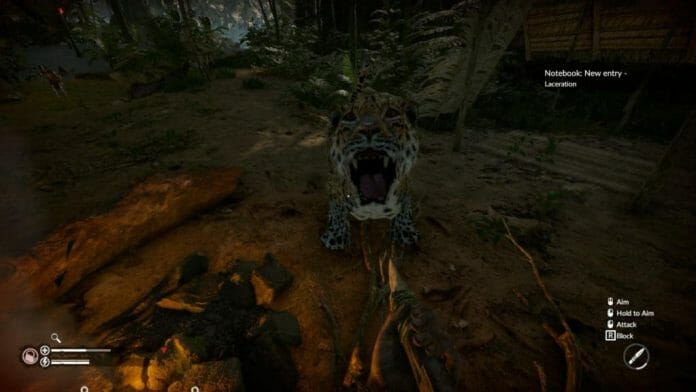 Within minutes of my first attempt, just after building up the base camp, I was bitten by a snake, stung by a scorpion, and left for dead. All because I did not have the resources necessary to cure the ailments that resulted from the jungle wanting to ‘eat me’. My second attempt was cut short by a scorpion alone, while my third ended during a chase as one of the tribesmen noticed me chopping down some trees: it was not the human threat that killed me, it was a swarm of bees.

Another element that kept me from getting the slightest of breathers, after the initial hour, is a little thing called the “sanity meter”. I actually like the premise of the sanity meter, since it makes sense that you would lose your mind, being trapped in a green hellhole. The problem, however, is that it dropped at just about every opportunity. In real life, you will not go crazy just by taking a minute longer to get a fire going when it becomes dark. In Green Hell, you lost four points as soon as darkness comes. I have had leeches on me in real life, and it was nothing short of an “oh, gotta get it off” moment. In Green Hell, you immediately become two points more insane. Long story short: when you reach a certain point of insanity, the player character becomes schizophrenic – complete with voices in your head and everything.

With all of that said and done, I must commend the game for keeping me engaged. I went into it expecting just another survival clone. I have played the likes of The Forest, Ark: Survival Evolved, and We Happy Few. Of those three, only We Happy Few came out as something incredibly unique. While Green Hell is not exactly unique, it does have its own quirks and nuances that ultimately lets it stand out on its own.

For about half the price of a normal triple-A title, Green Hell is a worthy Early Access title. I do not endorse shelling out money for anything that is not, at the very least, close to release, but if you have to, I would go with Green Hell above the likes of just about any other “jungle survival” game out there, hands down.