When it comes to custom and limited edition consoles, there is no denying that Microsoft really knows how to tickle one’s fancy. Although Sony is no slouch either, having produced some really beautiful consumer consoles (namely Spider-Man, 500 Million Limited Edition, God of War), the difference between the two companies is that Microsoft has a wonderfully cheeky penchant for creating unique and once off console designs. A recent favourite is that of the Jurassic World Xbox One X, which has now been outdone by the Mayan inspired Shadow of the Tomb Raider Xbox One X! 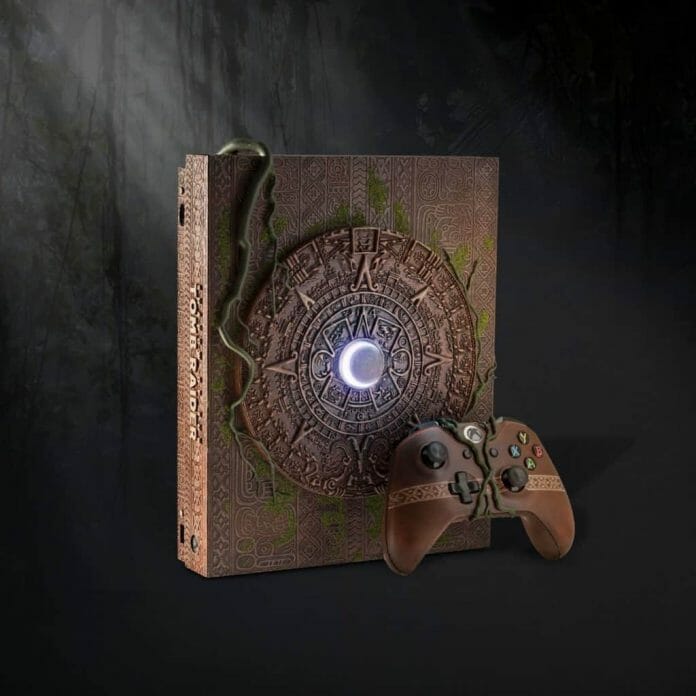 In Shadow of the Tomb Raider, Lara’s hubris causes her to accidentally bring on the Mayan apocalypse. It is therefore up to players to help navigate the young explorer through an entirely new adventure; one that tasks gamers with helping her to “master the deadly jungle, overcome terrifying tombs and persevere through Lara’s darkest hour”. Given the setting of the game, Microsoft and Square-Enix have come together to create a beautiful and once-off limited edition console.

At first glance, you would not be remiss for thinking that this could be an artefact unearthed from a Mayan ruin. Not only does the Shadow of the Tomb Raider Xbox One X feature unique indentations and carvings of Mayan origin, but it even has moss and vines “growing” over its facade. As if it was a part of an ancient ruin, and Lara herself has managed to explore and excavate it for her collection.

Better still, and no doubt the console’s showcase feature, it has an incredible Mayan inspired dial on the top of the console that features a glowing crescent moon! Naturally, it also includes a matching controller, complete with vines, a weathered wooden look and mayan inspired ‘carvings’. The cherry on the top is that is also includes a digital copy of Shadow of the Tomb Raider for Xbox One X.

Although it is a bit of a bummer to note that this incredibly unique console will not be coming to retail for traditional consumers, it is encouraging to know that it is being auctioned off for a good cause. At the time of publication, the value of the Shadow of the Tomb Raider Xbox One X is hovering at a rather steep US $7600 (ZAR R115 000).

I really like what Microsoft and Square-Enix are doing for animal welfare, and if I had the money, I would probably bid on the Shadow of the Tomb Raider Xbox One X. Since it is vastly out of my budget, and I already have an Xbox One X, I have chosen to make a contribution to my local SPCA. I encourage you all to do the same.

Shadow of the Tomb Raider releases on 14 September, 2018, for Xbox One, PlayStation 4 and PC.