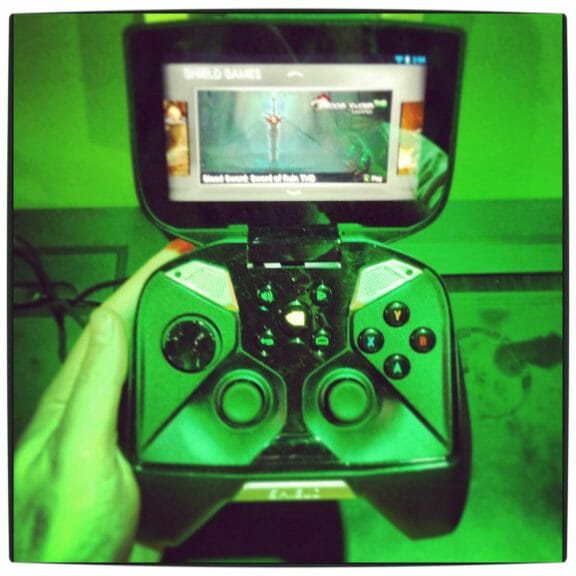 Nvidia has quite a sizeable presence at E3 2013 and has been showcasing the latest graphical hardware for both computers and mobile devices.

Of particular interest this year, however, is the long awaited Nvidia Shield, which is the green graphics card makers first foray into portable console video gaming.

The Nvidia Shield is the company’s answer to allowing consumers to enjoy high fidelity graphics on a portable device.

The device itself is lighter than I thought it would have been and fits comfortably in two hands. The shape of the Nvidia Shield is actually quite similar to the Xbox 360’s Gamepad. So much so, that it even has the same ABXY layout of face buttons as the Xbox controllers. The Xbox 360’s controllers are, in my opinion, the most ergonomic and conformable amongst gaming consoles, so emulating this design choice works in the Shields favour.

Where the Nvidia Shield differs, of course, is in the addition of a large and high resolution screen which folds onto the device. True to its name, the screen acts as a ‘shield’ for the device and magnetically folds easily and without much effort. The Shield also has a nice high quality plastic casing, which feels smooth and sturdy to the touch. The thumbsticks are recessed into the base and the d-pad is slightly concave for accuracy, but neither feels as premium as those found on Xbox and PlayStation controllers.

The Tegra 3 chipset in the Nvidia Shield is quite capable, with games showcasing a dizzying array of particle effects and reflective surfaces, all of which looks superb on the Shield’s gorgeous 5-inch 720p display.

Since Nvidia’s Shield is based on Android, the company offered E3 attendees the chance to try popular demos of Android games that it has shown before, such as Conduit, Dead Trigger and Sonic.

As good as Nvidia’s Shield appears to be, I personally do not see a place for it. I actually prefer to play games on my iPad, a device that has games that are just as good from a graphical standpoint and a device that can do so much more than just play games. Furthermore, the Nivdia Tegra 3 chipset is already outdated. These factors make spending $350 (around R3500 – R4000) seem like a ridiculous idea. After all, for only $50 more one could own a PlayStation 4.