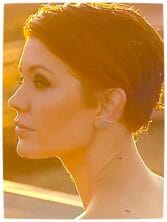 Adidas is currently embarking on a new advertising campaign to promote the German-based company’s heritage line of casual sports apparel known as Adidas Originals. The aim of the campaign is to get consumers to embrace their originality by wearing Adidas Originals products, which have a unique and old school feel that borrow inspiration from sports fashion styles of the 1940s to 1980s.

The global Adidas Originals campaign has seen large success with international celebrities such as Nicki Minaj, Katy Perry, Daft Punk, David Beckham and many more lending their support to advertise the brand. In South Africa, the lovely Pippa Tshabalala was chosen to spearhead the localised advertisements for the Trefoil branded line of Adidas Originals merchandise.

Pippa Tshabalala is a South African video games journalist and the former host and pioneer of PlayR and The Verge, two popular South African video games centered television shows. She is a learned individual with two degrees (BA Fine Arts and MA Fine Arts with a specialisation in Digital Animation) from the University of the Witwatersrand and humbly splits her current time between raising her son Elio, producing content for MTV Base Africa and working as a freelance creative consultant.

View more of Pippa below in the behind the scenes look at creating the Adidas Originals ‘Represent’ advertisement and online by means of Twitter, Facebook and her personal blog.