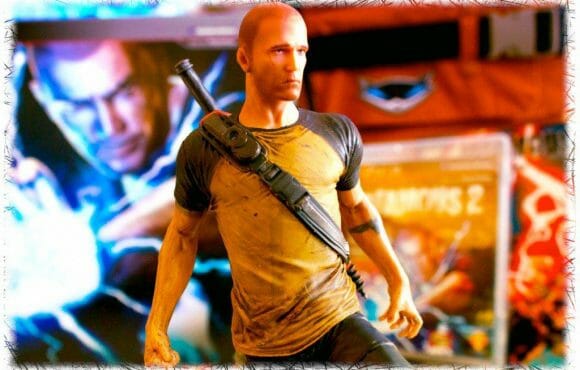 The video game industry in our beloved country has made many large strides over the last several years. Uncapped Internet along with speciality video game stores and events have gone a long way in placing South Africa on the world map of video game playing nations. Despite this it would appear that we are often forced into grasping the shortest stick in the bunch when it comes to limited and special edition versions of video games. Two prime examples are that of inFAMOUS 2 and Gears of War 3. Instead of the full featured bundles, South African retailers will only receive the watered down ‘standard’ special edition version of each game (in case you missed it, we are giving away a ‘special edition’ copy of inFAMOUS 2).

Since childhood I have always been drawn to anything marked as ‘limited’, ‘special’ or ‘rare’. I still fondly remember collecting X-Men Fleer ’95 Ultra trading cards (all of which I still have) and squealing in delight at obtaining any of the extremely rare and limited foil, battle or ‘x-ray’ cards. This is why I cannot help but be annoyed at how our local distributors seem to have taken a step back after taking two steps forward. 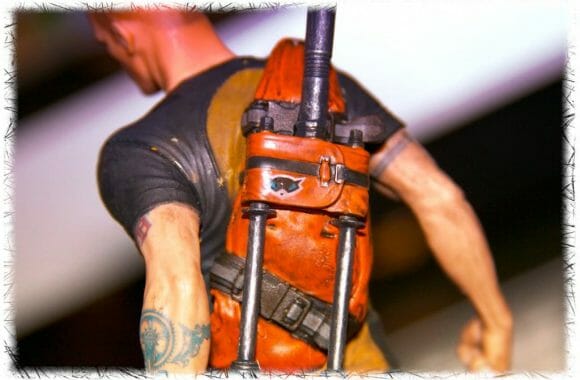 For many years the only way to obtain limited edition video game bundles was by importing them from the United Kingdom or the United States of America. However, from about the year 2000, the South African video games industry began to change. This new found maturity allowed for speciality stores (BT Games), magazines (New Age Gaming) and events (Rage Expo) to thrive. As a renewed interest in the video gaming industry was ignited, more and more exclusive video games bundles started to arrive on our shores. In a very short period of time the South African video games industry has grown into a formidable participant in the global video games arena.

Despite a burgeoning video games marketplace in South Africa, it would appear that issues are still prevalent in terms of providing local video gamers with exclusive game related content. A dire problem for people like myself who just ‘have to have’ those limited edition items. Of course there are ways around these problems, but the fact of the matter is that South African gamers should not have to resort to ‘extreme’ measures in order to enjoy what they have become naturally accustomed to over the years. Annoying ‘stock issues’ aside, if there is a limited edition item that you simply must have, you can simply resort to the costly method of importing the desired items yourself, which is exactly what I did. 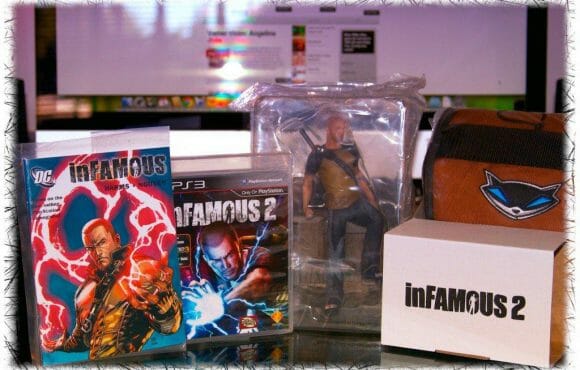 [yframe url=’http://www.youtube.com/watch?v=jfWEnXUW4zo’]
(Side note: this is obviously not a Vamers unboxing video, but we do hope to make our own in the future)
The brilliant inFAMOUS 2 super voucher, which is exclusive to the Hero Edition, contains the following downloadable content:
In addition to the copious amounts of downloadable content, the inFAMOUS 2 Hero Edition is packaged with a full sized sling backpack. The bag is actually very reasonable and is detailed enough for cosplay usage as well as cool enough to use ‘everyday’. It is easily one of the most practical limited edition inclusions of any gaming package I have come across. In fact, the sling pack is well padded and big enough to carry around an average 15″ sized laptop. Not too shabby at all. 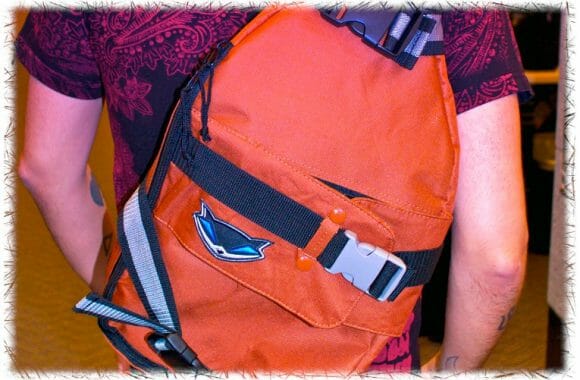 Other than the game, bag and the exclusive downloadable content, the best part of this entire bundle is, without a doubt, the limited edition Cole MacGrath statuette. This highly detailed statue, designed by Sucker Punch and sculpted by Dave Cortes of Inu Art, stands at 22 centimeters tall and comes with a New Marais roof top stand – perfect for display purposes. According to the PlayStation blog, Dave Cortes is a toy industry veteran who is known for some of the coolest action figures from companies such as McFarlane, Neca and Mezco. Unwrapping the Hero Edition package immediately reveals the kind of quality and level of detail that the Cole MacGrath statue exudes. From the scar on Cole’s face, to the plasters on his fingers, or the tattoos on his arms, all the way to the Sly Raccoon decal on Cole’s sling pack, the statuette oozes with quality. In fact, the statue alone is worth the R750 price tag of the entire bundle (US $99 – excluding shipping).

Please note that Vamers does not condone this method of accessing region locked content. You do so at your own risk and Vamers cannot be held liable for any incurred damage or incompatibility from utilising this procedure.

I was able to access the region locked content by creating another PlayStation Network account from the region the imported game was from. In this case, creating a United States based PlayStation Network account allowed me to use the inFAMOUS 2 Hero Edition Super Voucher and download all of the available downloadable content. Once the downloads were completed, I switched back to my main South African account and I was able to access and use all of the downloadable content without any issues.

The inFAMOUS2 Hero Edition is a spectacular limited edition bundle. I am very glad to have shelled out the extra dough for it and I would happily recommend this exclusive bundle to any fellow gamer.