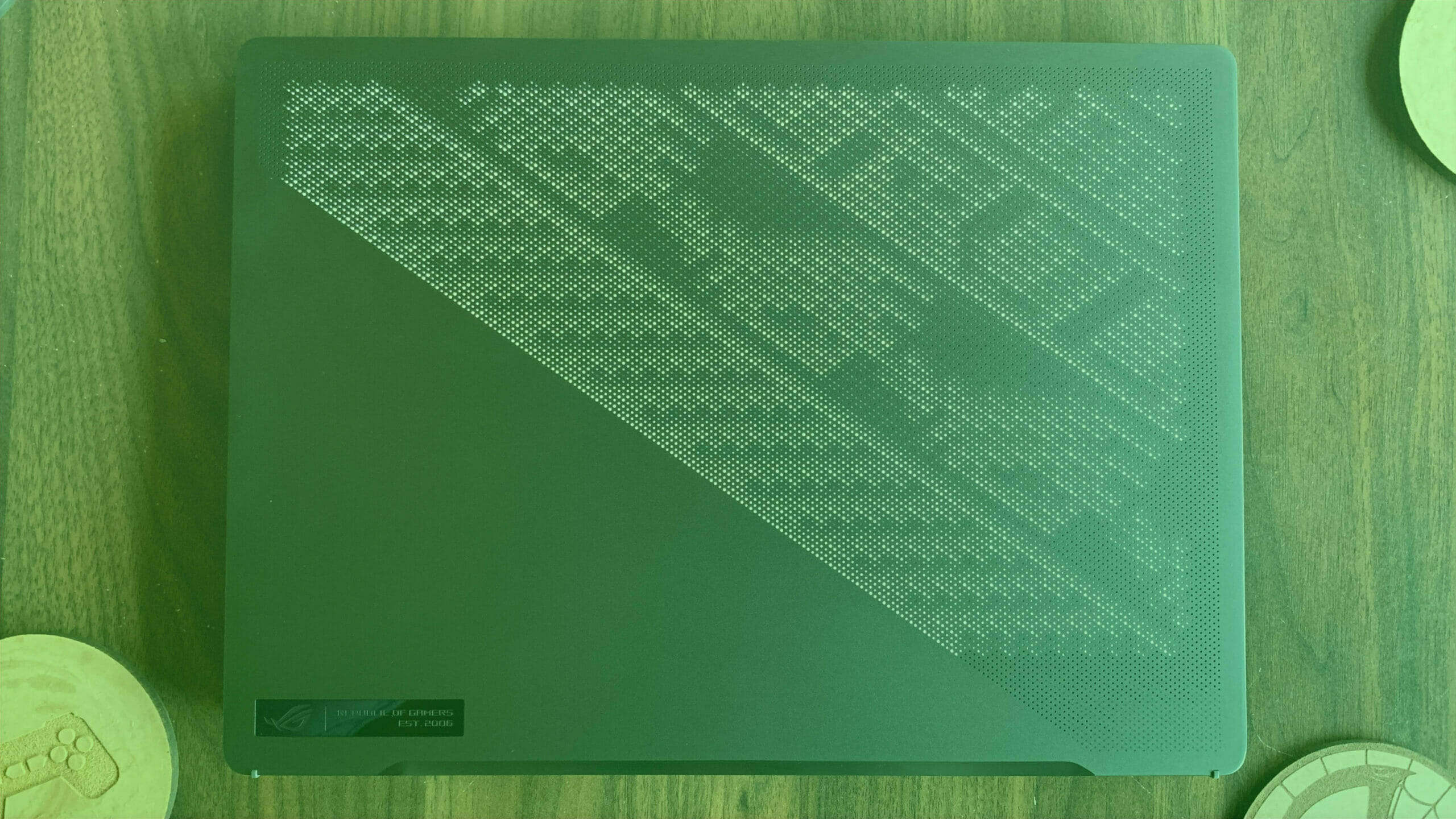 When looking outside of the Apple ecosystem, finding a personal computer with hardware and accessories originating from the same manufacturer is akin to finding the pot of goal at the end of a rainbow. Generally speaking, buyers will see various combinations of Intel, AMD, Nvidia, and even ARM processors and graphic cards forming the basis their personal computing (PC) experience. Interestingly, some manufacturers do like to go “all in” with single manufacturers, and the ASUS ROG Zephyrus G14 (2022) is one such device.

Like the ASUS ROG Strix Scar 17, the ASUS ROG Zephyrus G14 (what a mouthful) brings both power and utility to a modern laptop design. The difference, however, comes in the size of the package. The G14 might be one of the smallest and most compact gaming laptops yet tested at Vamers. With this in mind, it needs to be noted how the compact nature of the Zephyrus G14 does not mean it is a slouch. While compact, it boasts impressive battery life and serious horsepower.

The ASUS ROG Zephyrus G14 (2022) remains true to form from previous Zephyrus offerings. Its focus on mobility and ease of use reigns supreme over the flashy (and rather unnecessary) gimmicks of the manufacturer’s other lineups. It features an impressively compact slim design with an array of white LED pinholes on its lid – lovingly dubbed the “ASUS AniMe Matrix”. This matrix allows users to display customised animations on the lid, offering a sort of customisation never-before-seen in gaming laptops, without getting carried away by the ever tiresome “RGB all the things” mantra.

The ASUS ROG Zephyrus G14 is also pleasantly conservative in other respects. Measuring just 312mm in height, 227mm in width and 19.5mm in depth, as well as weighing less than 2 Kg, there is no denying how it can practically go anywhere. Moreover, with no more than a 14-inch screen, it can fit into most carrier bags, and fit on most countertops without taking too much space. Weirdly, the AniMe Matrix feature is an optional add-on and is only installed on the more expensive variations of the G14. Admittedly, it also adds a bit of girth to the overall package. Even so, the laptop never weights over 2 Kg and its depth only increases a few millimetres at most.

In terms of audio, the quad-speakers the laptop boasts are as conservative as they come. While they can go loud, a simple Macbook Air M1 sounds louder at half volume and also features ‘face up’ speakers. Downward-blasting speakers may be the norm for gaming laptops, but can be extremely subjective in terms of performance. Watching or listening to anything on a softer surface results in questionable-at-best audio quality, while putting it on your lap after dinner for a movie or a binge session on Netflix is, simply put, just not ideal.

The ASUS ROG Zephyrus G14 features a rather silly 16:10 aspect ratio with an IPS panel featuring 500 nits of peak brightness, an “improved” native resolution of 2,560 x 1,600 pixels, and a rather impressive 120Hz refresh rate. ASUS also claims the screen features a 3-millisecond response rate; but at 120Hz and only 14-inches, things like response and resolution become rather moot. Nevertheless, the extremely impressive monitor shows ASUS is dedicated to bringing gamers an uncompromising experience all-around. Beyond its AniMe Matrix lid and 14-inch screen, gamers can expect an ultra-premium feel thanks to its aluminium and magnesium alloy chassis. The bezels surrounding the monitor are also ultra thin, which contributes even more to its premium feel.

The keyboard features the same premium plastic design featured on the Strix, beautiful white LED backlighting included. Button presses feel good to the touch, and key travel distance mimics some of the more premium mechanical keyboards available today. However, it features a low-profile design, which may not be to everyone’s liking. With that said, it does compliment the design of the ASUS ROG Zephyrus G14 beautifully.

Elsewhere, the laptop features a rather nice touchpad for a Windows machine. It is said to be 50% larger than its predecessor and features a glass-covered surface. While pressing down on the touchpad still comes with that beloved “cheap” click and feel that ASUS laptops are unfortunately known for, gliding over it and actually using it with taps feels like a smartphone experience moreso than a laptop experience. It is rather unique and works nicely here!

The ASUS ROG Zephyrus G14 also thoroughly follows through with the “conservative” design when it comes to input/output and general connectivity. As thin as it is, prospective owners can expect two USB-A 3.0 ports, two USB-C 3.1 ports doubling as charging ports (and one as a DisplayPort), a MicroSD card slot, an HDMI output, a 3.5mm auxiliary audio connection, and a dedicated power connector for users who would rather not use their USB-C ports. The laptop also features high speed Wi-Fi 6E and power-efficient Bluetooth 5.2 connectivity under the hood.

As alluded to earlier, the ASUS ROG Zephyrus G14 is a model dedicated to AMD hardware. The unit received for review boasts an impressive AMD Ryzen 9 6900HS CPU paired with the AMD Radeon RX 6700S GPU. Gamers can customise their experience according to their budgets with some models featuring Ryzen 7 6800HS CPUs and AMD Radeon 6700S GPUs. This laptop also features up to 32 GB GDDR5 RAM, and up to 1 TB of NVM.e 2.0 storage space. It really is a powerhouse, regardless of which model is chosen!

Performance is as wonderful as ever as well. As one can expect from a pair of flagship processors, whether graphical or otherwise, and a mixture of incredibly fast RAM and storage, using the laptop is a breeze. In terms of gaming, for instance, games like Horizon: Zero Dawn and Marvel’s Spider-Man run like the rockstars they are meant to be. On Very High settings, framerates are constantly above 100 in Horizon while they average a smooth 80fps in Marvel’s Spider-Man (with ray tracing turned on). Marvel’s Spider-Man comes with the added benefit of AMD FSR 2.0 which, when enabled, delivers native resolution gameplay with raytraced reflections, at a steady 100 frames per second as well!

Photo and video editing delivers results that are just as surprising. Encoding a five-minute raw 4K video down to 1080p will take around 6 minutes, while exporting the same video takes only 4 minutes using DaVinci Resolve. Similarly, encoding 10 minutes of compressed 4K video and exporting at native resolution was just shy of 20 minutes. While not quite as impressive as the ASUS ROG Strix Scar 17, the ASUS ROG Zephyrus G14 packs a big punch for its small stature, clearly showing how well the AMD hardware works together.

Like most laptops, it is worth noting how much keeping the laptop plugged in matters. When not connected to DC power, performance takes a notable dip. Ray tracing is simply not possible in Marvel’s Spider-Man without power, while frame rates dive to around 60fps in Horizon Zero Dawn. Video editing, on the other hand, seems mostly unaffected. It goes without saying that a laptop like the ASUS ROG Zephyrus G14 needs to have a big battery, and it most assuredly does!

When disconnecting the laptop from its power source (whether via the USB-C adapter, or the appropriate DC connector), the screen immediately dims and the AniMe Matrix switches off. These are just two of the multitudes of battery-saving methods employed by the on-suite ASUS software. Full-screen video gaming also takes a hit, and multi-video-playback gets a little choppy. That is all to say, however, that gamers can see an outstanding amount of battery life. Without any further tweaks, running a 10h YouTube video resulted in the laptop’s low battery warning only kicking in after around six hours. One hour later, the laptop switched itself off. Seven hours of video playback is quite decent.

Testing gaming while on battery power was decent as well. The low battery warning only appeared after five hours of solid gaming. In this sense the test took place via three hours of open world roaming and side quest completion in Marvel’s Spider-Man, followed by a 30-minute break, and then a further two hour session of open world roaming in Horizon: Zero Dawn. An impressive feat, to say the least.

In terms of raw power, the ASUS ROG Zephyrus G14 (2022) is a clear winner. There are no “value-added” gimmicks to worry about, with the “AniMe Matrix” lid simply reinforcing the conservative and useful nature of the laptop’s overall design. Its small stature allows gamers to take it almost anywhere, while the excellent battery life ensures gamers and creative professionals will have very little to worry about when ‘on-the-go’. Simply put, the ASUS ROG Zephyrus G14 (2022) may be one of the best gaming laptops of 2022, encouraging portability and mobility with an understated design and truly top-tier hardware.