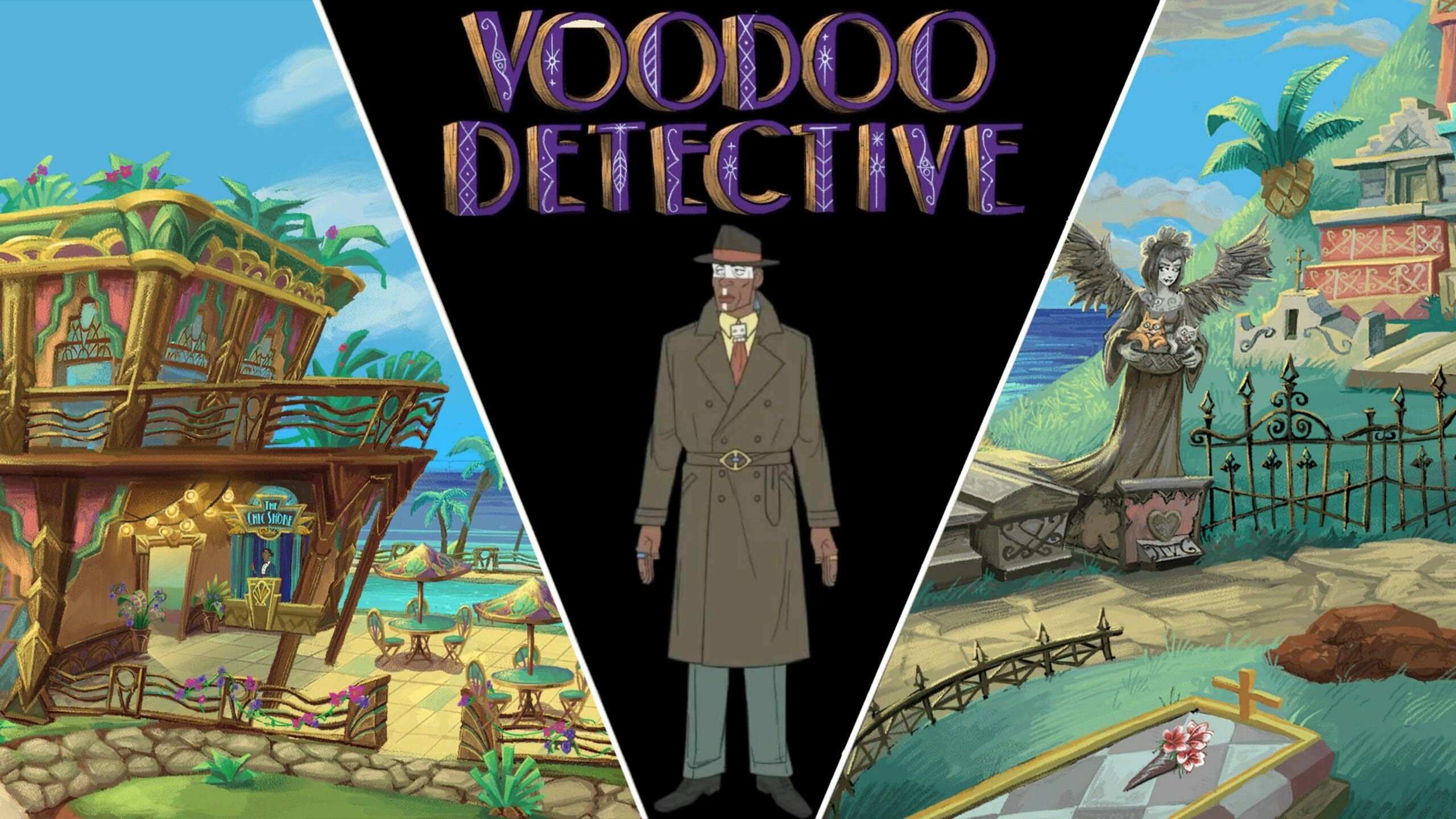 Nostalgia is a powerful emotion. It evokes beautiful longing for bygone feelings spurred on by something profound in one’s youth. For many elder millennial gamers and those who may be older, there is a clear soft spot for point and click adventure titles. This is particularly true given how the genre has, unfortunately and over time, waned in popularity. All is not lost, however, as independent developer Short Sleeve Studios has announced Voodoo Detective – a traditional 2D point-and-click adventure title heavily inspired by games of the past, such as Full Throttle (1995), The Secret of Monkey Island (1990), and Grim Fandango (1998).

Right from the onset, it is clear Voodoo Detective is hitting all of the right marks for fans of the point-and-click genre. According to the studio, it will feature “beautiful hand-drawn artwork, full character voice-over, and an immersive live soundtrack all wrapped around the story of a wise-cracking, hard boiled detective trying to save the world and pay the bills”. The game is set within the small island town of New Ginen, a location steeped in Voodoo culture, but overrun by chainstores and privileged tourists. The contrast is purposeful as it will draw light to the desperate battle for survival between the culture of people of colour and the infestation brought on by colonial corruption. The premise is certainly quite intriguing, and how exactly the Voodoo Detective‘s antics and story will unfold, continues to remain a mystery (for good reason).

Perhaps the most exciting aspect of Voodoo Detective is how the game’s pedigree includes point-and-click industry veterans such as: voice director Darragh O’Farrell (The Curse of Monkey Island), composer Peter McConnell (Psychonauts 2, Monkey Island 2: LeChuck’s Revenge), animator John MacFarlane (The Iron Giant, The Simpsons), sound designer Julian Kwasneski (Sam & Max, The Curse of Monkey Island), and many more. It is clear the modern title is receiving the care and adoration it deserves to evoke the true nostalgia of golden era 90s point-and-click adventures.

With the above in mind, we had the opportunity to interview two of the creative directors of the project: Eric Ackerman (Director/Writer) and Eric Fulton (Producer/Programmer/Director/Writer). The two Eric’s were kind enough to answer some pressing questions about the Voodoo Detective game, and have given us all reason to keep a keen eye on this mysterious whodunnit wrapped within the facade of a 2D point-and-click.

Which former point and click adventures are personal favourites of members of the team?

My favorite point-and-click adventure games or game series are Monkey Island, Grim Fandango, Leisure Suit Larry, and King’s Quest. I guess strictly speaking Grim Fandango utilises a “meat puppet” control scheme rather than a point-and-click one, but I think it still belongs in the category. The category of games that claim amaranthine purchase in my heart, that is.

The Secret of Monkey Island, the Curse of Monkey Island and Leisure Suit Larry: Love for Sail! And though it isn’t a point-and-click, Cartoon Cartoon Summer Resort was probably the first character-driven puzzle/exploration game that I played and will always deserve a spot on any list of my favorite games.

Apart from the favourites above, which older games served as the inspiration behind bringing Voodoo Detective to life within this unique genre, and why?

When we were figuring out how to animate our character portraits, we researched a number of games, but King’s Quest VI was the one we borrowed from most heavily vis-a-vis how the faces are animated.

And the argument could be made that we also drew inspiration from Mortal Kombat and Final Fantasy. But we certainly won’t say more than that on the matter. Loose lips sink ships after all.

In what ways will Voodoo Detective tackle the nuance of people of colour fighting back against the oppression of colonialism, and why was this particular topic chosen as the underlying thread for the overall narrative and design?

When the curtain is raised and Voodoo Detective steps on stage, it’s very quickly apparent that the rich, Voodoo-inspired culture he grew up with is slowly being commoditised and packaged for sale by greedy corporations (think Disney and Starbucks combined).

The game doesn’t precisely set out to characterise and tackle the struggles people of colour face from colonial forces of oppression, but it does tell Voodoo Detective’s story and in so doing, we touch on the pain, frustration, and sadness of having one’s culture sapped away by foreigners trying to line their pockets.

But actually, what’s kind of interesting is the second part of your question. You asked why we chose this particular backdrop for the story, and the truth is we kind of stumbled upon it! I, Eric F., had written a short story about a man named Voodoo Detective who used “Voodoo magic” to help solve a mystery. This was back in 2017, before the idea of making a game was even a glimmer in our eyes.

I have to admit, at the time, my view of Voodoo was largely informed by popular culture in the United States, which is to say I was largely uninformed and held some pretty offensive views based on common stereotypes. I’m sure Eric A. probably feels the same way. When the idea of making a game that borrowed so heavily from Voodoo culture started to seem like a real possibility, the reality of drawing inspiration from an active religion set in. We wanted to be as respectful and accurate as we could whenever we referenced Voodoo. So I’d say we slowly grew into the backdrop, and as we did, we figured it would be appropriate to touch on the topic of colonialism without making it the focus of the whole story.

Guybrush Threepwood has many run-ins with voodoo magic, might there be fun and unique call backs to other titles of yore for seasoned gamers to enjoy and discover?

It’s funny you should follow-up with this question! In my previous answer, I was just talking about how my initial understanding of Voodoo had been informed by popular culture. Monkey Island was a part of that popular culture and so while we draw a ton of inspiration from those games, as far as Voodoo is concerned, we tried our best to remain faithful to the religion. But I will say there is a debt to those games that can never be repaid as far as inspiration goes.

Is there any particular person or character who serves as inspiration for the person who portrays the detective in the Voodoo Detective game?

Although we drew from classic noir stories from the likes of Raymond Chandler and Dashiell Hammet, Voodoo Detective is very much his own man. And what a fine man he is! We love how Voodoo Detective turned out. I, Eric F., almost want to get his face tattooed on my arm, but I don’t like needles.

However, with respect to his character design (which, by the way, was accomplished by the wonderfully talented Tiana Oreglia), we ended up using actor Woody Strode as one source of inspiration for his physical appearance.

The music featured in the trailer is rather quirky. Does this reflect the theme of the game overall as players deal with these tourists or will the game delve into darker themes as well? Should players expect the same look and feel throughout or will the visual and auditory identity of the character and themes change along with the narrative?

I can’t overstate how excited we are about the music for Voodoo Detective! It’s being composed by none other than Peter McConnell of Monkey Island, Grim Fandango, and Psychonauts fame. The song we chose for the teaser trailer is actually somewhat distinct from the rest of the songs in the game, which favor a more 1930s noir jazz aesthetic by and large. We’re currently in the process of recording all the music with live musicians from Nashville and San Francisco, which has been an utter thrill.

You mentioned quirk. I would say the timbre of the game walks a line between the whimsy of a game like Monkey Island and the slightly more serious tone of a game like Grim Fandango. But at the end of the day, it’s a game and we’re here to entertain you. We plan to do it with a captivating story, beautiful music, breathtaking artwork, and a little humor to make you smile while you enjoy them.

What are Voodoo Detective’s favourite snacks to eat and drink?

Unclear. Though he clearly seems to enjoy eating macadamia nut crusted mahi mahi bites, steamed miso tai snapper, and poisson cru made using the deadly fugo fish. And he usually likes to wash it down with a dry martini, a mango mojito, or if he’s trying to keep it simple, a fat slug of rum.

The town of New Ginen is infested by chain stores, yet it is rich in Voodoo Culture. How is the balance between the surreal – the voodoo and its magics – and everyday life struck? What is Voodoo Detective doing to keep players from becoming overwhelmed in a sea of lore and mystery as they explore clothing stores and malls?

It’s true, New Ginen is slowly being overrun by chain stores! There are really only a few native holdouts left on Main Street. Chief among them is Donut Hole Billy’s bar. Billy is Voodoo Detective’s brother. The aspects of Voodoo culture we borrow from are woven into the story as well as the puzzles. So you don’t see Voodoo culture clashing with foreign influence so much as you see Voodoo Detective, a Voodoo man, drawing from his knowledge of hoodoo and his Voodoo upbringing to help solve his case. The player shouldn’t bet at any risk of becoming overwhelmed so long as you discount the overwhelming pleasure they’re sure to experience as they enjoy playing the game. And if you do ever come across a term you don’t know, we have an in-game appendix in Grammy’s Book of Voodoo to help you out.

It has already been said that players can expect Full Character Voice-Over. How much of this extends to non-playable characters?

All characters in the game who speak are voice acted. We have a very fine cast of actors and we’re super excited to share their performances with the world!

Describe the Voodoo Detective game in one word!

Voodoo Detective is set to release in 2022 for PC, Android and iOS, and certainly seems like it will be a game absolutely worth diving into.