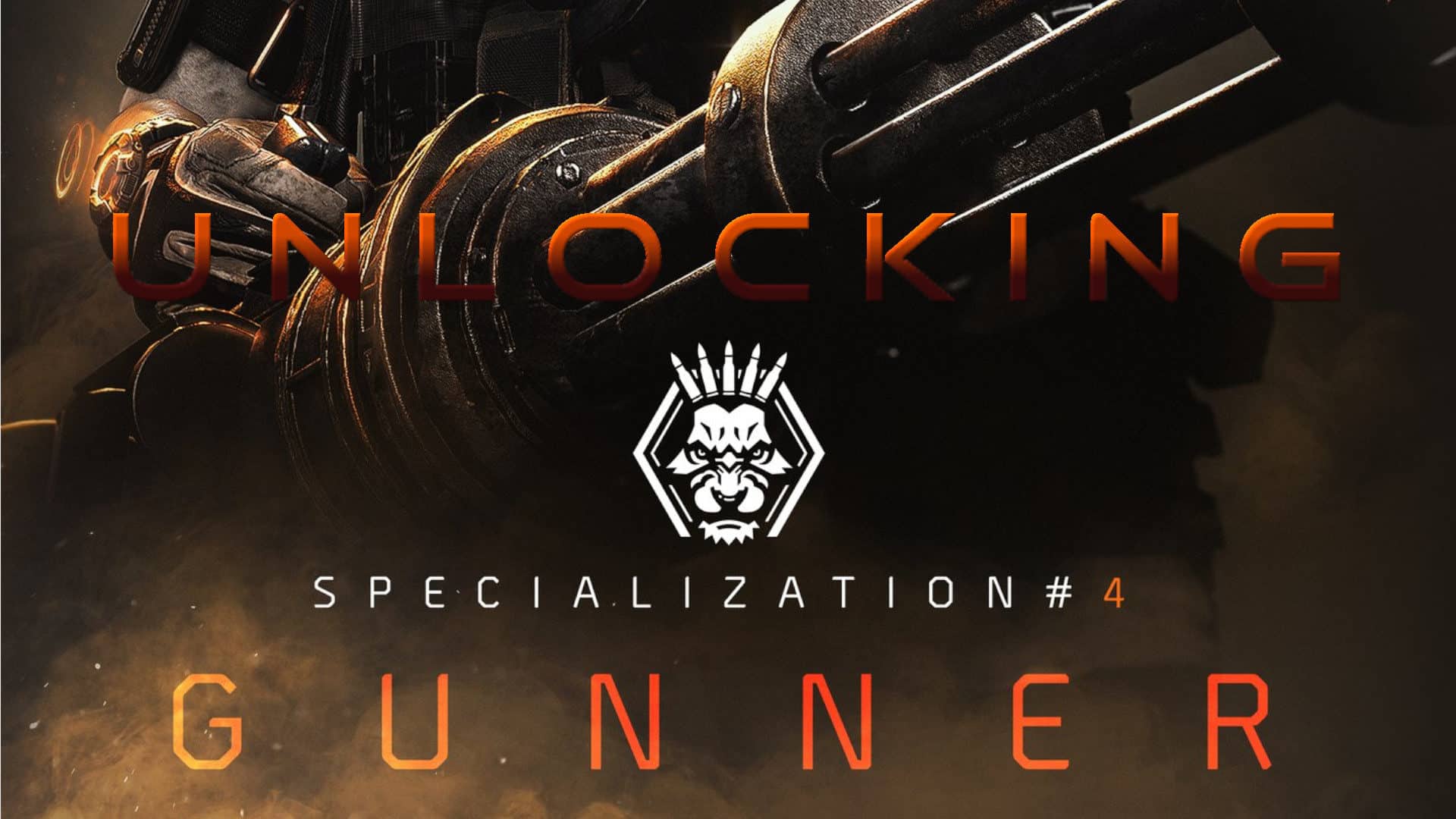 Ubisoft learned a lot from The Division. This is why, when they announced The Division 2, they were dead-set on ensuring that the end-game would be a great experience. The Xbox World Premier Gameplay trailer from 2018, in fact, not only showcased vast new graphical improvements and gameplay enhancements, but also focused specifically on Specialisations, a brand-new endgame aspect players would unlock at level 30. Now, barely a year later, Ubisoft is, once again, focusing on even more endgame additions. First, they released a new Raid, and now, The Division 2’s Gunner Specialisation has entered the fray.

The Division 2’s Gunner Specialisation perfectly balances out the current options players have when their characters turn 30. It joins the fray, minigun in hand, along with the Sharpshooter’s sniper rifle, the Survivalist’s tactical crossbow, and the Demolitionist’s grenade launcher. The Gunner is a tank in just about every sense of the word, and it looks incredible.

Unlike the established specialisations, the Gunner is not part of the initial selection when a player turns 30. The Gunner actually needs to be unlocked by way of a series of tasks that rotate around Washington, DC. This means that players who opt not to go for the other specialisations, and instead want to unlock The Division 2’s Gunner specialisation, will have to do so with commitment… or you can simply pay for the Year 1 pass and get the Gunner (as well as the other two new unknown specialisations) unlocked immediately. If you do, the tasks instead reward you with cosmetics. It really is just a matter of what is more important – time or money.

With that said, many of us are not bothered to pay for it. As such, we will have to go through a number of quests, complete a bunch of tasks, and even fulfill a few challenges in order to unlock it. This is where this article comes in, as I have collected everything you need to know about the unlocking process, and I have compiled it in one handy guide.

This is how to unlock The Division 2’s Gunner Specialisation

In order to unlock the Gunner, players will have to complete a number of tasks called Special Field Research challenges. Each part of these challenges have four objectives that vary in difficulty. Many of them can also be completed in any order, as long as they are from the same stage.

Roach is the final boss of the Bank Headquarters mission, making this a very straightforward task to complete. The easiest way to do this one is to deal with all other enemies in the room before grabbing the shock ammunition in the middle of the room. Use this ammo to shock Roach two times before you defeat him. Make sure that the objective marks as complete before you defeat him. Just in case, shock him more if needs be.

This task is a tiny bit more challenging than the previous one. Control points generally take a while to reset and for this one you need to make sure that no Downtown West control points are in friendly control. When they are all under enemy control, you can go ahead and take them all back while the Sharpshooter specialisation is active. This sounds easier than Task 1, but may prove to be tiring considering how long it takes to capture a control point at times.

Task 3: Defeat a certain amount of enemies with the mounted gun in Grand Washington Hotel. Normal difficulty or higher.

For this one, you will need to kill all enemies using the mounted gun in the hotel. This will take some time, as mounted weapons can, unfortunately, not be moved. According to many players who have already mastered this task, the easiest way to do it is to have your character die via the final opponent in the room. This will reset your progress in the mission, but not for the task. Keep using the gun on all enemies but one, die, and repeat until the task is done.

This is an easy one. All you need to do is kill all enemies involved in public execution events, using the marksman rifle. Pay special attention not to use skills or other weapons. You may also want to do these on your own, in order to ensure success.

Task 1: Set Lt. Kennedy on fire three times before defeating him in the Air & Space Museum. Normal difficulty or higher.

Just like the first task in stage 1, this task requires you to set the final boss of the Air & Space Museum alight before you defeat them. Like last time, you need to deal with all the minor enemies in the room before you set your sights on Lt. Kennedy. Grab the incendiary ammo in the hall after the Mars exhibition and have at it. This task is best done with a high powered, single shot weapon. Space your shots and make sure that Lt. Kennedy is set alight three times before you finish the job.

Just like with Stage 1, except now you have to do it in the Southwest region, while you have the Survivalist specialisation active. This could prove to be the most trying task to complete simply because you cannot have control of any of the control points beforehand.

Task 3: Defeat enemies that are trapped in foam.

This is a super easy one. Get one of your gadgets that freeze enemies in foam, and hammer away at them. This can be done in free roam, or during missions, Raids, whatever your heart desires.

Pretty much exactly like the Stage 1 variant. All you need to do is ensure that you use nothing but weapons classified as shotguns, and make sure that weapon is the one that deals the finishing blow. Try not to use skills, and try to do these without other players helping.

This one is just like the first tasks from the other stages. However, unlike those, you simply need to shoot Sgt. Wade in the head a bunch of times. Make sure to only shoot the helmet, and break it before you finish the job. Your biggest challenge here is not to kill the boss before you get the objective done.

Task 3: Defeat a certain number of enemies while they are confused.

This is a challenging one. As someone who does not have the Gunner specialisation active yet, you have literally no means to deliberately confuse enemies. As such, the best way to do this is to head to Hyena controlled regions or take on Hyena bounties. The charging enemies have hip bags that can be shot. If these explode, they will confuse the charging Hyena, and whichever Hyena was in earshot.

Optionally, you can do this task with a friend who has already unlocked The Division 2’s Gunner Specialisation. They can confuse enemies for you, and you can just finish them off!

Exactly the same as the previous tasks from previous stages. This time around, all you need to do is grab a good SMG, and head over to any and all convoy events that you can find on the map. Completing five of them without using skills or getting kills in any other way, will, finally, let you move on to the final stage.

This is a fun one! The challenge itself is really straightforward and requires no special ammunition to be used or special weak points to be broken. Rather, you should not use any armor kits at all during the engagement. This one will force you to learn how the boss moves, what his moveset is like, and what openings you can take advantage of. It will also teach you how to perform better by not relying on healing.

Enemies heavies are a dime a dozen in pretty much any True Sons region. All you need to do, is to do a couple of rounds through one of these regions and you are good to go. Note: these are the guys with the armor and the big guns.

Task 3: Defeat a certain amount of enemies that have been pulsed.

Yet another straightforward skill-based one. This time around, all you need to do is use the Pulse skill, and mash that button every time it exits cooldown. Make sure that all enemies you kill are still affected by it.

Just like before, this one is best done on your own, and with as little offensive skill use as possible. Assault rifles are easy to handle at most ranges, and you do not have to wait for control points to open up in a certain region. Head to any contested point!

Task 1: Destroy all of the Basilisk’s armor before defeating him on Roosevelt Island. Normal difficulty or higher.

In all honesty, I think that the first task of Stage 4 was the perfect culmination and end to the Special Field Research. This one is more tedious than it is worth! In order to complete this task, you need to shoot and break every single piece of armour on Basilisk before he dies. The easiest option is to use the Demolitionist grenade launcher since it damages all armour in equal parts. Thankfully, you can die to the Basilisk in short fashion if you believe that he may be too close to death before you get all pieces damaged.

Task 2: Use a mounted weapon to kill a certain amount of enemies in the Roosevelt Island Stronghold.

Much like the mounted gun at the Washington Hotel, this task takes a tiny bit of doing but can be cheated through just the same. The mounted guns are located about halfway through where you rescue Angela Woods. Just mow down the enemies and continue to die to the last one until you have killed enough of them.

The LMG is a crowd favourite, so this task should be easy to do for many. The only problem is that, unlike all the other tasks, there is no way of telling how much you need to complete since the game does not reveal what the number is.

Now this is a doozy. It works just like the Roosevelt Island, or Washington Hotel tasks, except you can use fast travel. The problem is that you have no way of telling beforehand how many enemies you will have to contend with before you need to go through the process of pulling up the map, choosing the correct spawn location, and waiting for the fast travel loading screen to finish. Thankfully, completing this task, and by extension Stage 5, rewards you with The Division 2’s Gunner Specialisation.

Once you finish up all stages and their respective tasks, you can start to unlock the various skills and abilities that the Gunner has to offer. These include a brand-new Pulse skill that lets enemies ignore cover and makes them confused, and a new grenade that traps enemies in place with riot foam.

I really like the fact that the post-release specialisations need to be unlocked by doing tasks in the open the world. The good news is that there are two more specialisations on the way, and I am curious to see what they will be like.