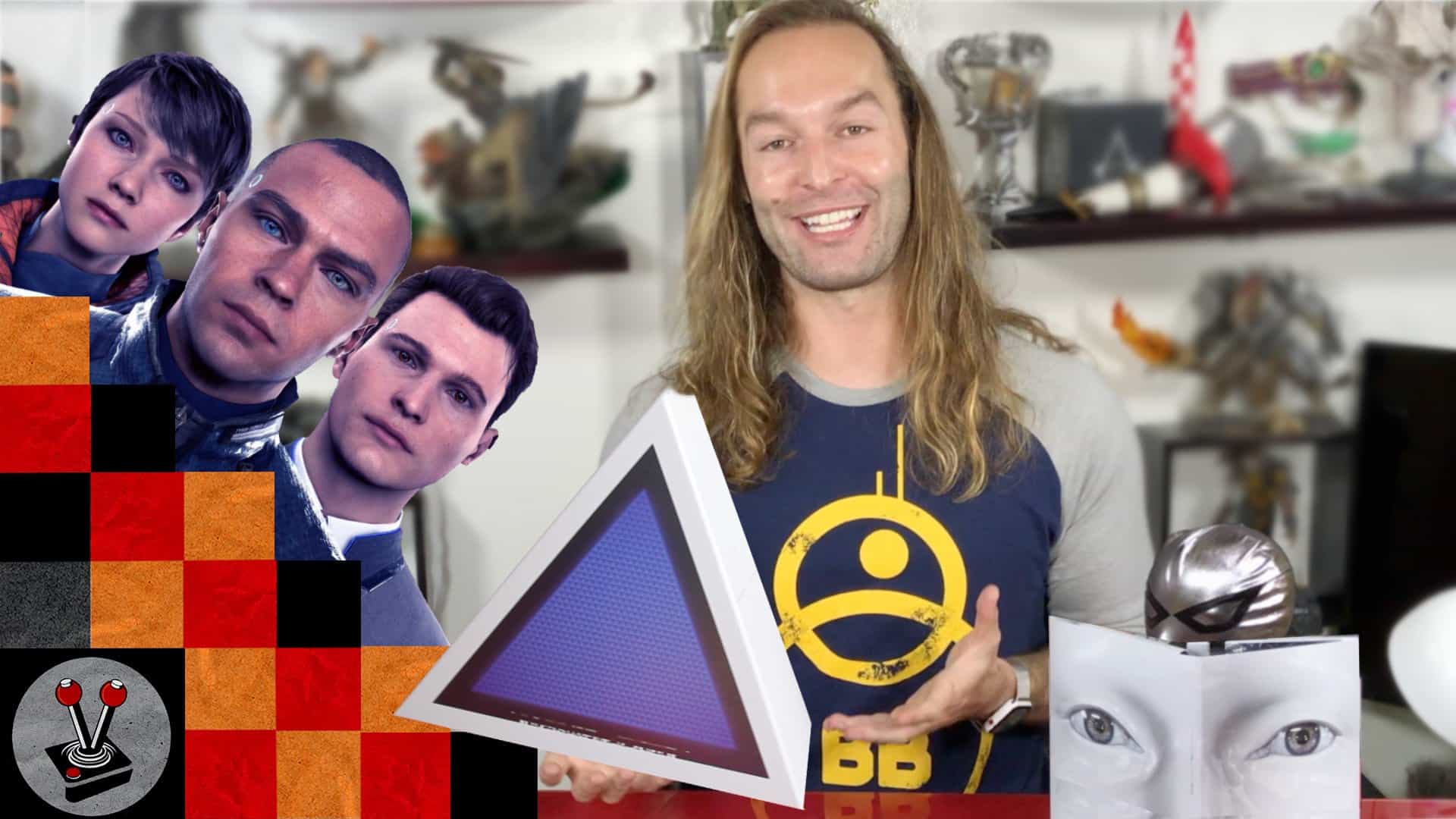 Detroit: Become Human takes place in a dystopian vision of our future whereby androids are now commonplace in both personal and work environments. Whether to help around the house or to do manual labour, androids have become indispensable to human life. When the androids evolve to develop emotional sentience, however, they are confronted with persecution and the violence of an unaccepting society.

One of the most interesting aspects of the Detroit: Become Human limited edition press kit, is that it is meant to emulate the user manual that an owner of a new android would experience in the year 2033. With this in mind, the box is pyramid shaped with a holographic imprint on the top and a variety of unique serial numbers on the sides and bottom. One of those serials also doubles as the limited edition number of the package – ours is 1514/2000.

Opening up the box is very interesting indeed. Once the lid is lifted, the inside components fold out like a tetrahedral flower, complete with unique geometric patterns in black and grey on the inside, and images of the different androids that are available for purchase from ‘Cyberlife‘ on the outside. Once fully opened, it presents the owners manual (complete with anxiety inducing android eyes) and registration card to the user. In this case, the registration card doubles as the download token for the game via the PlayStation Network Store.

Opening the ‘manual’ gives the user access to three things: a series of personality profiles of the androids available for purchase (includes a history of android development); a greeting and introduction to androids from the first ever Turing test beating android, named Chloe; as well as a gorgeous art book with images and details of the 2033 setting that Detroit: Become Human takes place in.

In addition to a uniquely shaped box, a user registration card, owners manual and gorgeous art book; the Detroit: Become Human limited edition press kit also contains a funky temporary tattoo set (for users who want to pretend to be androids) as well as a glossy double sided poster.

The front side of the poster shows the three main protagonists in the game (like a movie poster), whilst the rear of the poster offers a glimpse of the choices in the first level of the game that users can make – including all of the different outcomes.

There is no denying that a lot of thought and love went into crafting this Detroit: Become Human limited edition press kit. As such, it gives me a lot of good hope that the game itself will also be just as good, if not better. As a big fan of Quantic Dream’s Heavy Rain, which let players experience the narrative perspectives of archetypes like ‘the killer’, ‘the detective’ and ‘the victim’; I certainly look forward to experiencing the way in which Detroit: Become Human allows players to take control and explore the stories of androids Connor, Kara and Markus.

My understanding is that each android will offer a unique perspective on the larger unfolding narrative, one that explores not only their individuals stories, but also the story of their people and of their world. Much like previous games from Quantic Dreams, all of the player’s choices made in Detroit: Become Human directly influence how the story unfolds. As such, you could potentially kill off one or two of the main characters right at the start of the game, or they may survive until the very end. Not only is this a unique gameplay mechanic, but it also encourages players to replay the game in order to see if they could have done things differently.

Given that our current technological climate is focussed on developing advanced artificial intelligence, Detroit: Become Human might offer a cursory glance into a possible future for humankind. With the game’s premise in mind, and the gameplay that Quantic Dreams is known for, I can confidently say that I am extremely looking forward to playing the game  (exclusively for PlayStation 4).