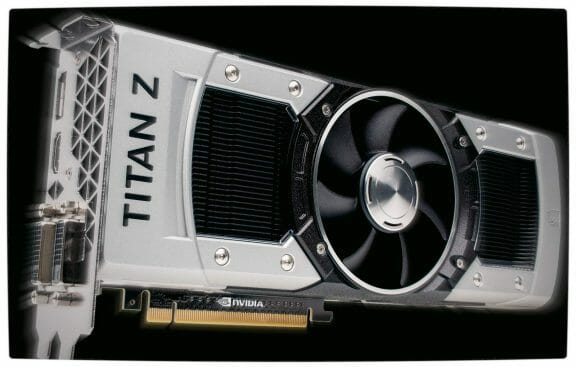 The GeForce GTX Titan Z was unveiled at NVIDIA’s annual GPU Technology Conference. The twin set of Kepler-based GPUs will have 12GB of dedicated frame buffer memory, which makes it perfect for next-generation gaming on multi-monitor setups. NVIDIA declares that the GTX Titan Z has been engineered for next-generation ‘5K gaming’ and that its Kelper-based chips have 2,880 cores per GPU.

“If you’re in desperate need of a supercomputer that you need to fit under your desk, we have just the card for you” Jen-Hsun said during the conference.

Tuned to run at the same clock speed and equipped with dynamic power balancing, the Titan Z is designed to not bottleneck itself like other dual-GPU cards. Low-profile components and ducted baseplate channels that minimise turbulence, ensures excellent performance in a card that is still cool and quiet.

The announcement of NVIDIA’s GeForce GTX Titan Z  follows the release of the companies latest GTX 750 and 760 cards, which feature the newer Maxwell chipsets.