There comes a time in each geeks journey where the life long company of another person begins to outweigh the benefits of ‘self-loving‘. That or they have finally given up hope for an affordable and lifelike Cylon to shack up with. Either way, we have compiled a list of 10 gorgeously geektastic engagement rings to peruse over for when your big day eventually arrives. 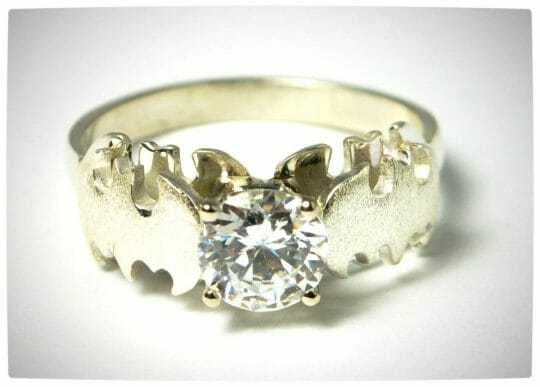 The Batman Engagement Ring was crafted by Ari for his Etsy shop, WhatsYourPassion. Ari has been creating unique custom jewellery since he was 14 years old and uses his love for comics, anime and games to create some truly inspiring and beautiful geek accessories. 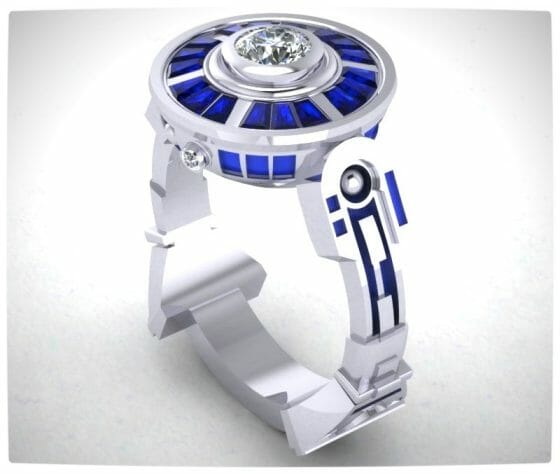 The Star Wars inspired R2-D2 ring was crafted by Paul Bierker and is made out of white gold with sapphire baguettes and diamonds. This is one of best rings I have seen because of how it stays close to the source material yet is equally beautiful in its own right. The R2-D2 ring would be complemented perfectly with the previously featured R2-D2 watch. 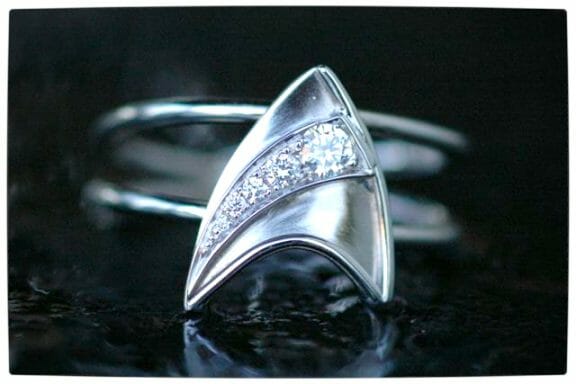 The Star Trek inspired engagement ring is described as having a ‘shooting star design’, which any self respecting Star Trek fan will point out is merely a fancy way of referring to the Starfleet insignia. The ring is handmade by VaLaJewellery out of white gold and is adorned with ‘white round diamonds’. Tapping the ring does not beam you up to the USS Enterprise, unfortunately, but it will bring a lifetime of joy to any serious fan of the Star Trek series. 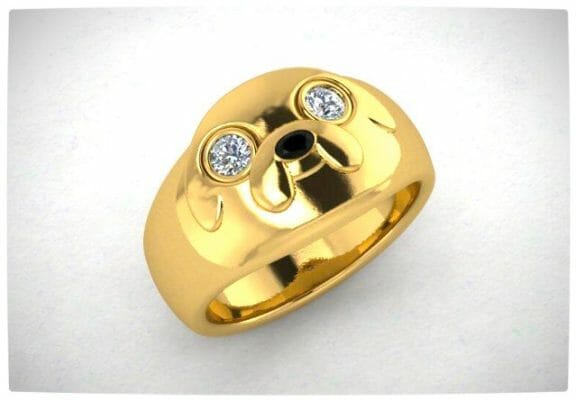 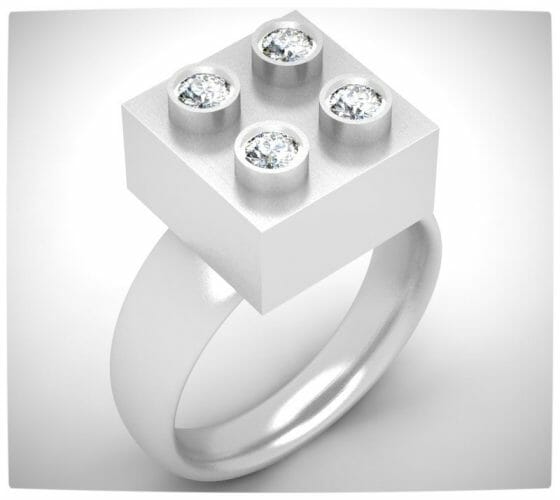 The LEGO ring is easily the most functional and least intrusively designed ring featured in this post. A stark solid white gold block with four diamonds adorns a simple white gold ring. The featured LEGO ring was designed by Paul Bierker and is a must for anyone who is a fan of LEGO. 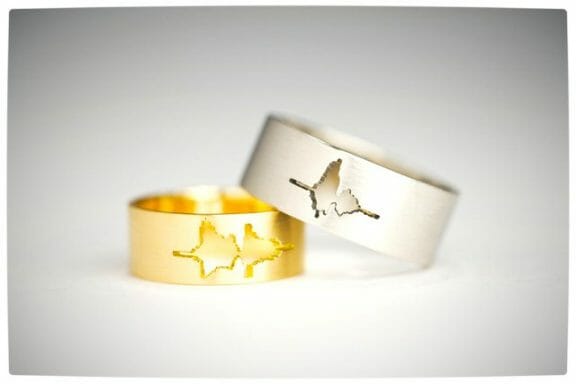 A Japanese artist and designer by the name of Sakurako Shimizu had the idea of immortalising certain phrases into the bands of rings. The result is the popular “I Do” rings which contain the waveforms of the voices of a couple saying a particular phrase etched into either silver or gold rings. The possibilities for waveform rings are potentially limitless and always unique. 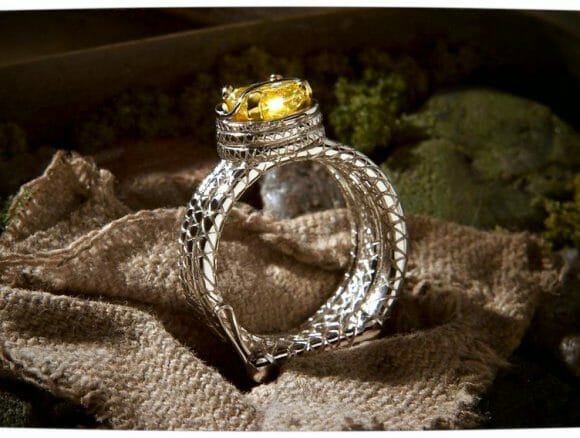 The Indiana Jones ring is unique, beautiful and truly thoughtful. The ring was designed by Redditor Homerliwag for his girlfriend who is a huge fan of Indiana Jones. The ring is crafted to resemble Indi’s coiled whip with a yellow diamond used to signify the lost idol that was being searched for in Raiders of the Lost Ark. 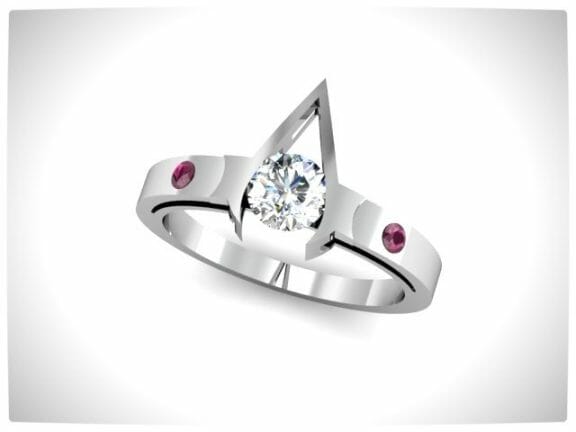 The Assassins Creed engagement ring is designed by Takayas Mizuno and is made of white gold with a diamond in the centre which is accentuated by two rubies. The design is simple and elegant with just a hint of the source material. A classic piece. 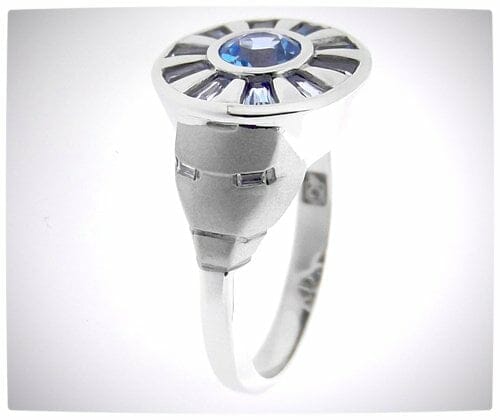 The Iron Man ‘Arc Reactor’ engagement ring is a custom designed piece made by Gino Arizmendi. The ring was commissioned by a fan of Arizmendi’s previous work, namely his unofficial TARDIS inspired ring. The ring is made of white gold with the reactor set with blue topaz and diamond baguettes. One of the best aspects of the ring is how Arizmendi subtly imbues Iron Man’s mask into the sides of the ring. Great design. 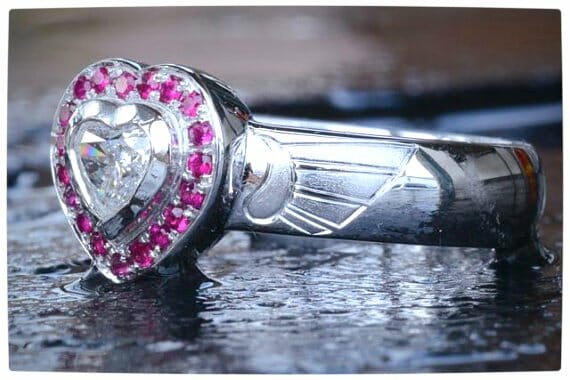 The Zelda ‘Life’ engagement ring is inspired by the Nintendo classic video game, The Legend of Zelda. The ring’s main focal point is shaped like a heart in order to resemble the ‘life’ that Zelda needs in order to complete his quest and rescue the princess. The ring is handmade by VaLaJewellery from white gold with a heart shaped diamond that is surrounded by rubies. The ring also has Zelda’s Wings of Icarus engraved on each side of the heart with a Triforce logo engraved on the bottom of the ring, and lastly the words “It’s dangerous to go alone. Take this” engraved on the inside of the band. The ring is filled with great detail and is perfect for any Zelda fan.