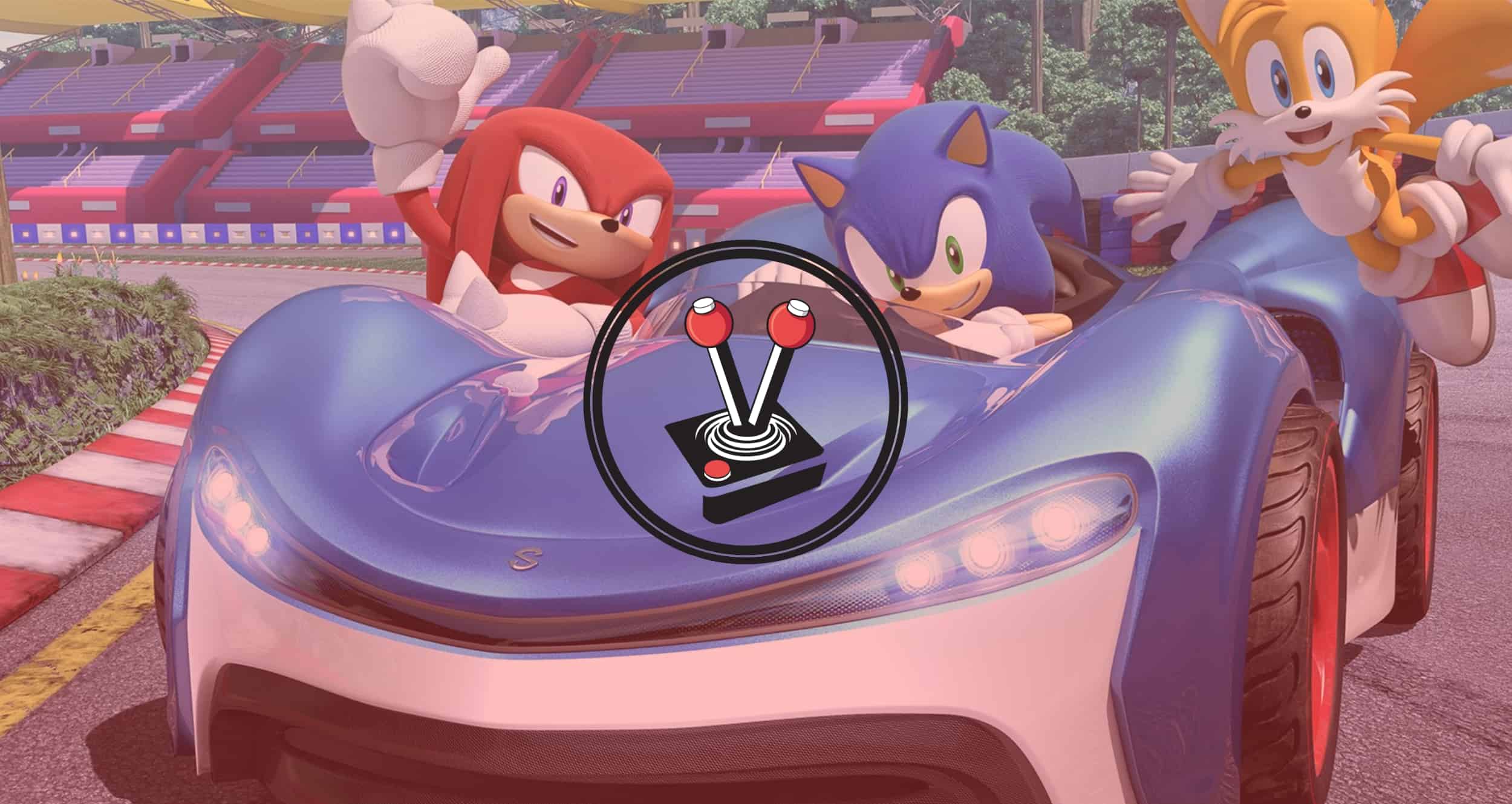 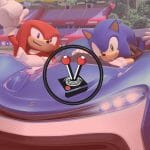 My own experience with Kart Racing titles hearkens all the way back to the old PlayStation days. I fondly remember spending many days and nights playing both Chocobo Racing and Walt Disney World Quest: Magical Racing Tour – both thoroughly as possible. I enjoyed them immensely, and thus wanted to find every single unlockable. As great as these titles were, however, I never could get myself to enjoy any other kart titles. Not even new ones, like Sonic Team Racing.

Sonic Team Racing is quite a decent little game. The issue is that it does nothing to prove its worth in a world where Mario Kart dominates casual racing, and proper racing simulators prove to be incredibly entertaining. With that said, there are a few things about Sonic Team Racing that I have learned to appreciate. In this Vamers Sonic Team Racing Review, we look at the good, the bad, and ugly of Sumo Digital’s latest kart racing title. 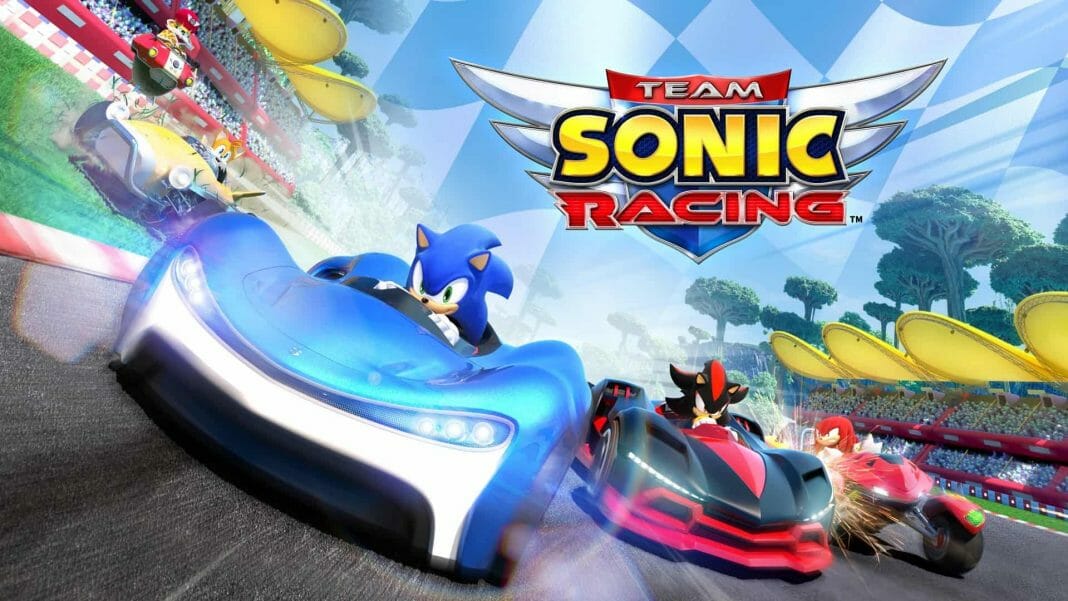 It is all thanks to a chilli dog

The very nature of the kart racing genre, being easy to pick up and play, implies that a narrative element is unnecessary. Sonic Team Racing plays right into this trope. As such, players will not find any meaningful story here. I kind of appreciate this aspect of the game. It is steadfast in how little it tries to innovate – a stark contrast compared to that of Sumo Digital’s previous kart racer, Sonic & SEGA All-Stars Racing. Courtesy of its lack of innovation, it does emphasise how well-polished the kart racing genre can be.

As with most racing titles, Sonic Team Racing does include a campaign mode. It consists of seven chapters, strewn along all tracks the game has to offer. The campaign also goes over the other game modes, such as ring collection, target smashes and elimination rounds. These are all held together by cutscenes that push the story forward. Well, as much as static character art and pre-rendered backgrounds can move you forward, at any rate.

The story is incredibly simple. It all comes down to how much Sonic wants to eat a Chilli Dog at a picnic, and how some guy called The Inventor invites the entire Sonic crew to test out his karts. There is also some good old cartoon kidnapping fun thrown in for good measure. That is essentially it. Even so, I will give the Sonic Team Racing campaign credit on how hard it leans on this little bit of exposition. This single-minded premise pushes the entire story forward through all of the tracks that the developers managed to incorporate, in between developing Mortal Kombat 11 and Crackdown 3. 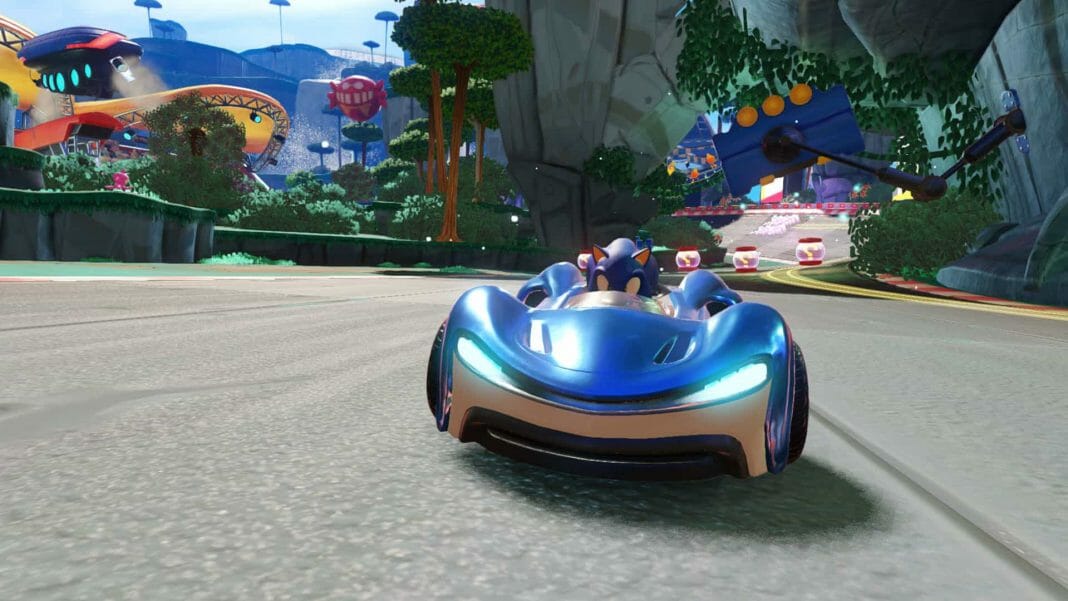 As you progress through the simple campaign, you will get to try all of the available race options. Ring Collection, for instance, lets players collect as many rings as they can – like in traditional Sonic games. Target Smash, on the other hand, requires players to smash through targets on the track!

Sonic Team Racing also features a variety of both online and offline game modes. Grand Prix requires players to take part in four races, whereby a winner is selected depending on how many overall points were accrued. There is also a Time-Trial mode that tasks you with getting to the finish line as quickly as possible. Lastly, Exhibition Mode acts as a custom race function where players can customise the racing rules.

I will commend the game on how much it emphasises cooperative play. Throughout either of the modes above, and the many types of races the game has on offer, Sonic Team Racing’s focus on team mechanics is a breath of fresh air. In order to win, players cannot just arrive at the finish line in first place. Instead, players need to be aware of their teammates and how they are doing on the track as well. This includes making use of boost trails that appear behind anyone that is in front of you, transferring items to your partners when you will not use them, or even using a “team ultimate move” that will help all members in your team. 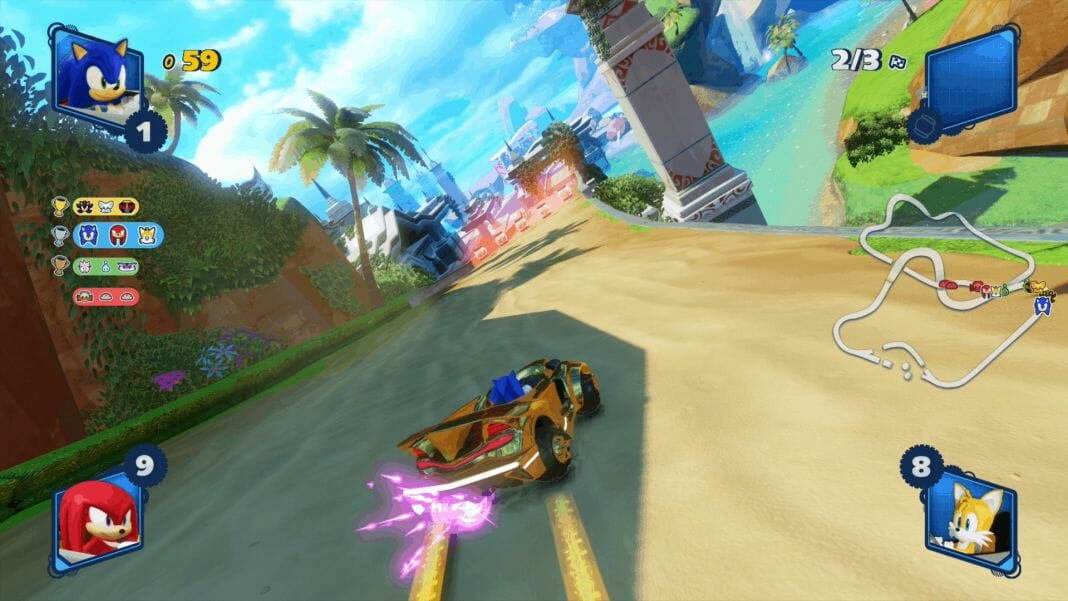 Throughout all of this, however, the game’s biggest and most pressing flaw stems from the fact that Sonic Team Racing features zero variety. All standard races feature the same teams. Team members cannot be changed, and teams cannot be customised. This means that, whichever team you choose, you will always get to play with the same set of teammates and the same karts. This issue becomes even more obvious when you take into account the 21 tracks the game features at launch. There is only so much you can do before it all becomes very stale.

The lack of variety is mitigated slightly through kart customisation. Players can buy parts for karts, bonus blocks, and even cosmetics, by using the in-game currency. Speaking of, the currency is referred to as Credits, instead of the obvious Rings (a missed opportunity). In terms of unlocks, they include a few different wheels, bumpers, spoilers and other cosmetic changes that can be applied to the karts. Beyond a few “performance upgrades”, which make no difference to the way the karts handle, the game at least tries to add some variation. 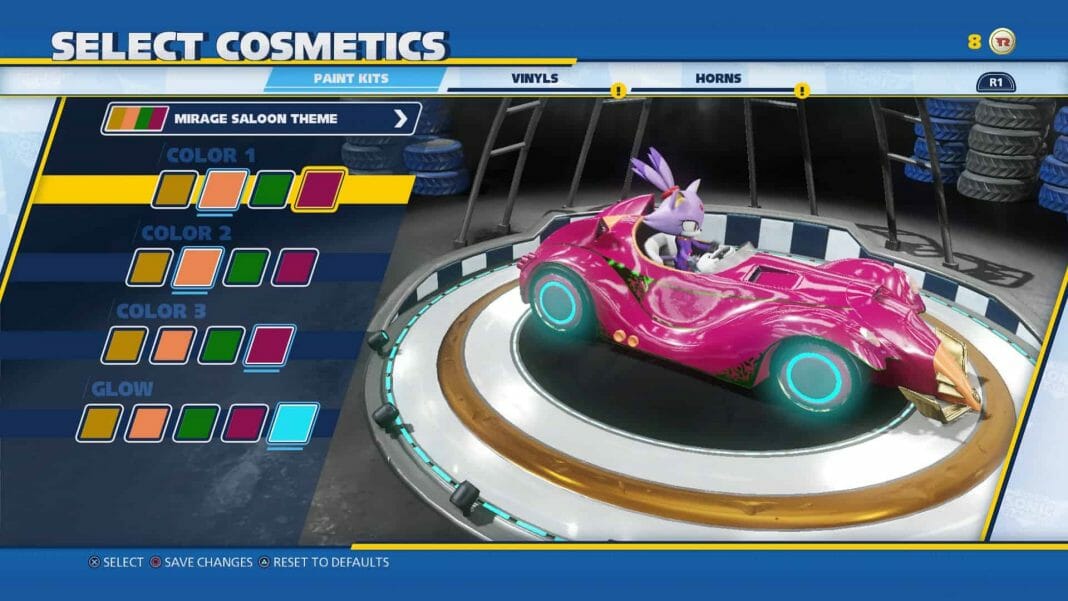 While this is a nice reason to keep playing, the real problem is that the variety is limited. There is no way to completely alter the way karts look, and the few bits that you can change, seem like nothing more than a means to appease the customisation crowd. A halfhearted attempt that does not really add any longevity to the game. Fortunately, every character’s individual kart looks distinct enough to feel unique. A bonus given how poorly the karts feel when controlled.

Controlling your racer in Sonic Team Racing is horrendous. Speeding up and turning corners is easy enough to do, but regardless of whom you choose to race as, the kart will always feel stiff. Jumping is a decent experience, and physics seem to be concise throughout the game, but actually turning on a track feels awkward. Kind of like toggling a switch to turn a hard 90 degrees left or right. Fortunately, there are a few tracks to hone your skills with this strange stiffness. 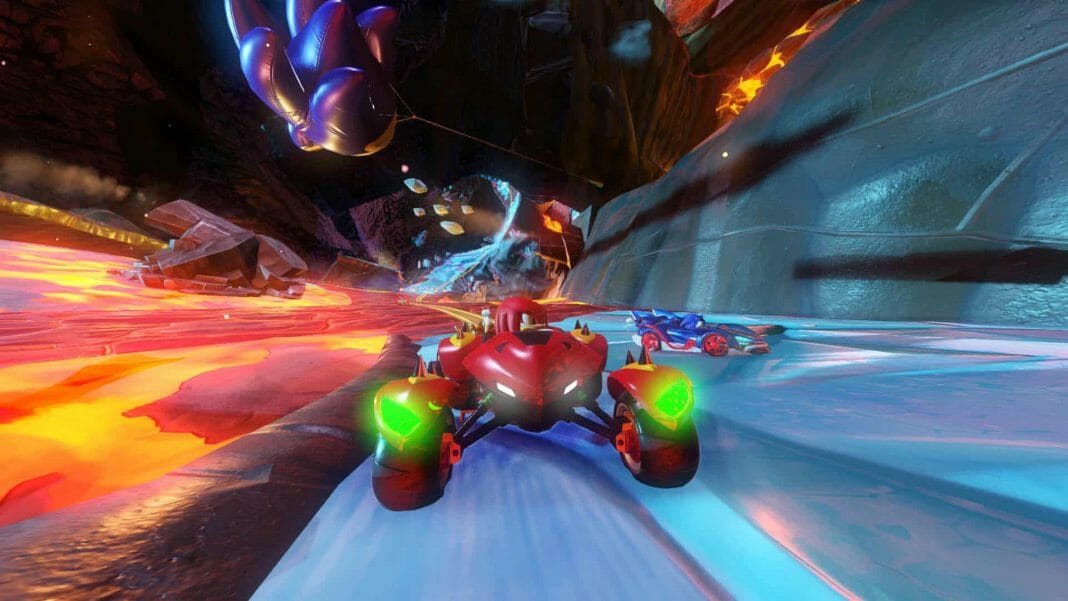 While they are few, tracks in Sonic Team Racing are visually appealing. Most stand out enough from one another to make them seem like unique tracks with their own distinct features.

Many of the tracks also take advantage of the fact that Sonic, as a brand, can literally go anywhere. As such, you can expect out-of-this-world courses such as Clockwork Pyramid, Dark Arsenal, and even Turbine Loop. Other more innocuous tracks include Boo’s House, Wisp Circuit, the Haunted Castle, and even Sky Road. There are 21 tracks in total, each with three challenges to master throughout the campaign. 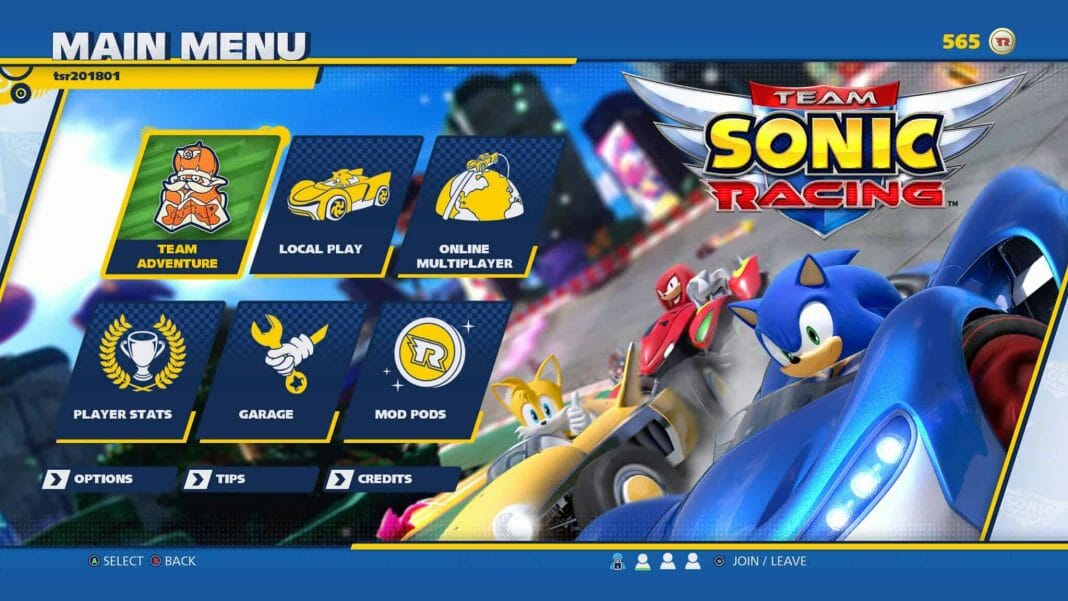 Tracks in Sonic Team Racing are super wide. I suppose the reasoning for this is so teams can stick together. I do not know how I feel about this since it removes one of the most exciting aspects of kart racers: the fear of being blown away or run off the track by a rival racer. This also encourages drifting around corners in order to keep pace and not lose speed – an aspect that can prove to be challenging considering the game’s weird manoeuvrability.

Fortunately, through all of this, the game performs incredibly well! The game boots up really quickly – faster than I always expect – and it loads into races equally as fast. In fact, the game loads so fast and performs so well, that the menu animations themselves feel like they are bottlenecking the game’s speed. Sonic would be proud of how fast this game can be.

Sonic Team Racing does nothing to make itself stand out. While some aspects are exceptionally well done, there is so much that holds it back from being the game that it ultimately wants to be: a worthy successor to Sonic & SEGA All-Stars Racing, and a decent competitor to Mario Kart 8, and the upcoming Mario Kart Tour.

I do appreciate that Sumo Digital tried to inject a few cosmetics into the game. Alas, it is only half-decent implementation that fails to appease the customisation itch. Mainly due to its lack of variety. Tracks, on the other hand, are varied enough to keep you busy for a few hours, but quickly become stale when you have played through all of them in the exceptionally uninspired campaign.

Simply put, Sonic Team Racing is boring. It might perform well, and look good, but it is not really fun to play. In a world dominated by the likes of the incredible Mario Kart, there certainly is room for a proper kart competitor. Hopefully Sumo Digital will use the outcome of this game to inject some innovation and excitement into future Sonic kart racing titles.