Since the 1980s, gamers around the world have enjoyed guiding a yellow puck around a screen, eating pearls and evading ghosts. Better known as Pac-Man, the game has become a classic of the video game medium; not only as an art form, but also in terms of gameplay.

Developed by Toru Iwatani for Japanese gaming giant Namco, the game saw great acclaim and popularity in the 80s, and continues to be played today – close to 40 years after first launching. There is no doubt that Pac-Man is the Japanese company’s most successful and iconic video game.

Pac-Man, much like Nintendo’s Mario, has become a veritable staple of popular culture and sits firmly atop the video game zeitgeist. As such, the beloved yellow ball continues to be present and reinvented for modern generations, such as through social media or impersonation.

Despite the proliferation of Pacman into video game and geek culture over the decades, one descriptive aspect of the character has gone fairly unnoticed: his eyes. Although the character was originally eye-less in the game, unlike the ghosts he devoured, later renditions of the character’s box art featured black eyes. Along with this change, comes a secret that many glance over. One hidden in plain sight.

Pacman’s eyes are the shape of… Pacman. 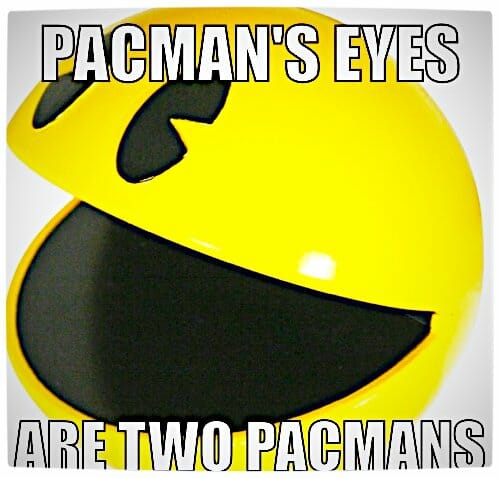