CONGRATULATIONS TO THE FOLLOWING PRIZE WINNER

[Thank you to to all who entered. This competition is now closed.]

Are you a musical geek? Do you appreciate the fine arts? If you do, this competition is for you.

The multi-award winning worldwide smash hit musical Jersey Boys makes its South African premiere at The Teatro at Montecasino on the 3rd April 2013. The show will run in Johannesburg until the 9th June 2013 before moving to Cape Town where it opens on 19th June 2013 and closes at the beginning of August.

To celebrate the launch of this Broadway smash-hit in South Africa, we are giving away a pair of tickets to watch Jersey Boys live in theatre at Johannesburg’s premiere stage, The Teatro in Montecasino. 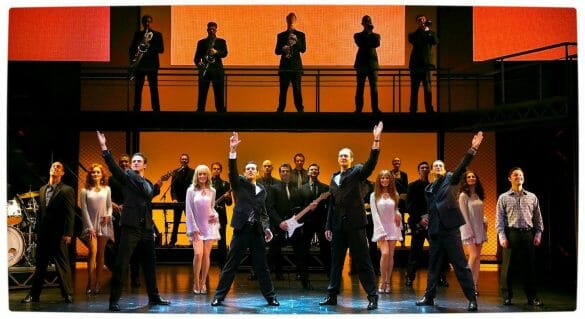 Jersey Boys is a fun-filled musical that is presented in a documentary-style format which dramatises the true-life story of Frankie Valli & The Four Seasons and their inspiring journey from the mean streets of Newark, New Jersey to the Rock and Roll Hall of Fame. The musical is structured as four “seasons”, each narrated by a different member of the band who gives his own perspective on its history and music.

To enter to win two tickets to this amazing show at The Teatro in Montecasino for the Tuesday 9th April 2013 performance, all you have to do is comment below with your best Frankie Valli impersonation.

The 2013 Win With Vamers ‘Jersey Boys’ competition closes at 17:00 on Wednesday the 3rd of April 2013. The person who provides the best submission, as judged by the Vamers staff, and who follows the competition instructions properly will be declared the winner of this competition. The judges’ decision is final and no correspondence will be entered into. The winner will be announced at Vamers discretion after the competition closes. Vamers will endeavour to deliver the prize within 2-8 weeks as described, however, cannot accept responsibility if the prize differs from advertisement in presentation or value. This competition is only open to residents of South Africa. Entrants under 18 years of age must seek permission from a parent or guardian before entering this competition. Entrants must be over 13 years of age or have parental consent to enter this competition. The prize consists of: 2 x Tickets to the Jersey Boys broadway musical at the Teatro in Monte Casino for the Tuesday 6th April 2013 at 20:00 performance. There is no cash or prize alternative and all prizes are non-transferable. Only one grand prize winner per competition unless otherwise specified. Entrants are free to enter as many of the other competitions as they would like, however only one entry per person will be accepted in each competition. Winners use and accept prizes at their own risk. Vamers and the prize sponsors, if any, cannot be held responsible for any injury, accident or loss of property as a result of accepting and/or using the prize. Winners could be required to have their details disclosed for publication on radio, television, printed media and Internet publications. Vamers and the prize sponsors, if any, reserve the right to cancel the competition at any time and shall not be liable to entrants for any action whatsoever. Vamers reserves the right to alter competition rules or prizes at their own discretion. Alterations become effective immediately and entrants shall not have recourse against Vamers or the prize sponsors. This competition is not open to staff (or members of their immediate families) who may be associated with the Vamers website or prize sponsors.