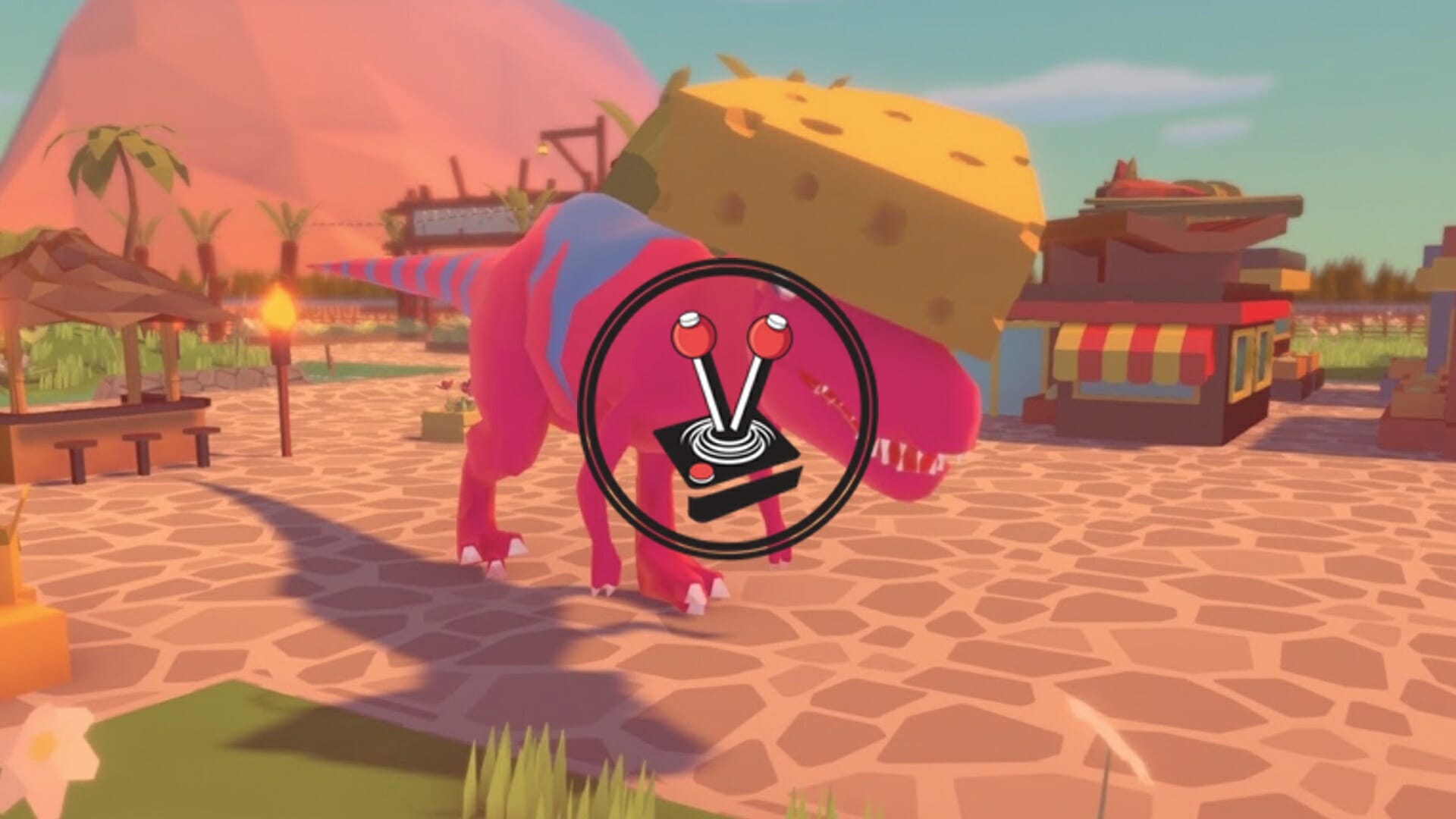 Park simulators are few and far between. Over the course of the last decade, only a handful have released with only one or two making a mark. Most recently, titles like Jurassic Park Evolution have helped to satisfy the itch for tycoon like games, but ultimately missed the mark in terms of longevity. Despite this, the game still managed to find a cool place in the hearts of many people (Hans included) thanks to its premise – running a dinosaur zoo! The last time this was possible was back in 2002 when the Dinosaur Digs for Zoo Tycoon released. Thankfully there is another contender in the name of Parkasaurus.

With bright colours, cute customisation options, and a plethora of interactivity complimenting much more in-depth park management systems, Parkasaurus has the makings of greatness. At first glance, Parkasaurus sounds like a kids game. It is presented with bold and colourful imagery, with cute dinosaurs wearing hats. In many ways, it can be described as a cartoon Jurassic Park… and it is incredible!

If you were around during the height of Zoo Tycoon, one look at Parkasaurus would be enough to turn you away. Humorously, this is exactly what happened to me, until Hans implored me to check it out. Needless to say, I am glad he did! I have no idea whether it is deliberate, but the way developer WashBear Studios presents the game is deceiving. At its core, Parkasaurus is a park simulator where the game challenges you to plan, design, and construct dinosaur exhibits; while maintaining the needs and wants of both the dinos and the park visitors. It has multiple modes of play, with a campaign centred as the go-to way of learning how to play. With that said, the campaign drops you into the thick of it where you have to refurbish an abandoned park and bring it back to all its glory.

The story in Parkasaurus is a weird one. I am admittedly not finished with the game (as is the nature of simulators). However, the premise revolves around the idea of dinosaurs having landed on Earth thanks to some wibbly wobbly timey wimey… stuff. The game does not dawdle on the specifics too much, and for good reason since this is not what it is about. Interestingly, some of the dinosaurs instruct you on how to build the correct enclosures for their offspring. They will then further implore you to gain science, money and the ultimate currency: happiness (or just “hearts” in-game), to open more parks all around the world. From the onset, it is clear the campaign is designed to be nothing more than a tutorial. The game opens up quickly after the first park proves to be a success, and it all spirals into one planet-wide sprawl of a park simulator, similar to Planet Zoo.

Unlike Planet Zoo, however, Parkasaurus is a whole lot of fun to play. This is thanks in large part to how incredibly easy most aspects of the game have been designed. The first thing the game will teach you is how to clear space and build enclosures. At the time of this writing, there are three biomes: Rain Forest, Taiga, and Forest. Every dinosaur in the game fits into one of these biomes, based on their breed and needs. Placing tiles on the ground and circling it with a barrier is essentially what you will be doing for the majority of the game. Tiles influence all kinds of statuses for the enclosure as well. Water tiles, for instance, are needed when dinosaurs want bodies of water in their enclosures. Ruggedness is influenced by terrain height, while rocks, trees and plants serve as additional objects influencing privacy and aesthetics. Naturally, you also have veterinarians who fill up feeding trays and take care of the everyday needs of your dinosaurs.

In order to fulfil pretty much all needs and wants, you will have to take a step back from management and building for a while to visit the Town. While nothing more than a glorified “shop” tab, Town is wonderfully stylised and hand-drawn in such a way it looks exactly like a mobile game; but without any of the time-gating or micro-transactions to bog down the experience. In this tab, you can check out the vegetable shop, buy meat, take a look at the barn for cultivating dinosaur eggs, and even visit the bank. There is also a Gem store which is how you unlock new types of dinosaur eggs. It may sound strange, but it essentially works like an overly simplified Creation Lab from Jurassic Park Evolution. I find having to convert hearts and science into gems a bit strange, but it beats having to send out research teams just for them to return with less than stellar results.

Beyond buying stuff and developing eggs, the game has a seemingly daunting management system. Employees need to be hired (all of whom are handpicked directly from resumes submitted to the Office), maintenance needs to be done, and all salaries need to be balanced whilst affecting the amount of money and science the park brings every day as little as possible. Beyond the Office, however, exhibits also need to be cared for – in addition to them taking time and resources to build. Basically, time management is critical to ensure everything runs smoothly. This ups the challenge for balancing money, hearts, and science quite a lot when you need to choose whether the next upgrade for the park comes by way of additional technology and/or building, or the cultivation of a brand-new dinosaur egg. With that said, every dinosaur comes with their wants and needs as well. Dinosaur population will end up being a deciding factor in how big or small an exhibit can be, but things like privacy, food, and how many toys there are will also play a role in your park’s ultimate success.

At the end of every game day, a memo of the earnings and expenditures the park experience is generated. It also includes a roundup of visitor reviews. Visitor reviews are not just another accessory either. Like another classic game, The Movies, reviews hide little details on what your park lacks or does just right. By reading reviews you can tune and tweak aspects of the park to maximise visitor happiness. After all, happiness equals cash and you will need a lot of it t succeed! Visitor happiness correlates directly to the flow of the park too. This means finding the perfect spot for rest stops along the way to dinosaur exhibits is king. Fill these spots with food stalls, restaurants, and the like to rake in some money. As you progress down the science tree, you will eventually unlock rest stops that come with benefits. Some food, for instance, will make visitors walk faster while others will make them more inclined to buy gifts.

Another quirky management system is the ability to dress your dinosaurs and staff up with all sorts of hats. These increase their skills, appeal, or can alter gender and biomes directly depending on where they are used. There is honestly nothing better than seeing a dinosaur walk around with a nice business hat, all dapper-like, and most visitors seem to agree! Security and janitors are also a must-have for the park. People will start reporting missing items and vandalism if there is not enough security, while the park will start to look like an untamed bog if janitors are spread too thin. All employees, whether vets, janitors, security guards, or scientists, will naturally level up over time. As an extra bit of management opportunity, the game lets you opt to spend their skill points manually and specialise the employees. I largely left them untouched and let the game auto-assign all their points since the rest of the management responsibilities was already a bit too much for me to handle.

Complementing the excellent management systems is the game’s overall design. When encountered for the first time on Steam, one might easily confuse the game for a kids game. This is due to the fact that it follows an overly simplified grid-like design, with vector-based graphics featuring solid lines and bold colours. In many ways, the visuals have an overbearing cuteness reminiscent of Dink, The Little Dinosaur. These design choices prevail throughout the entire experience and ultimately manages to captivate with its intriguing hand-drawn aesthetic. This cartoon design also alleviates the need to scrutinise every single aspect of the game. The very nature of it removes the need to ask why dinosaurs never seem to sleep, or why they are constantly playing with their toys and interacting with the foliage and rocks in the exhibits. It works incredibly well, and hides a truly intricate and satisfying management sim experience under its colourful exterior.

Excellent management opportunities and a cutesy design aside, the game does have a few bugs to take note of. I would often lead to one of my parks, to find one or two dinos outside of their exhibits. Naturally, in a panic I would attempt to get them back in, only to realise that they were still “inside” – the game simply loaded them in wrong. Similarly, I would often get dinos clipping through exhibit barriers, or seemingly watch them get stuck inside recently placed rocks. I have also encountered one or two spots in a few of my parks that visitors would somehow not be able to walk around, leading me to build a new path as a solution. Thankfully none of these bugs has ever been game-breaking, and I am sure they will be patched out in the near future.

Beyond a weird bug or two, Parkasaurus is a genuine treat to play. From a genuinely surprising number of management systems through to one of the silliest cartoon aesthetics ever seen in a park simulator, the game holds a wonderful amount of unexpected surprises belying its cutesy storefront presentation. In more ways than one, the game hearkens back to 90s classic cartoons like Dink, The Little Dinosaur. Overall, it is an amazing title with a lot of promise, and has the ability to eventually become one of the best park simulators going forward.