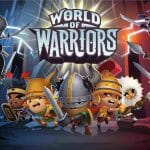 When it comes to mobile games turned console ports, you really cannot find any good titles. Heck, I cannot even think of any off the top of my head! That is, not counting the most recent World of Warriors PlayStation 4 release.

Since the game is essentially just a port of a mobile game from 2014, you really should not expect too much in the way of gameplay. With that said, however, just like the recent Loco Roco remaster, the World of Warriors PlayStation 4 release did get a bunch of improvements and added little features. All of which helps to make it feel like a proper console release. Vamers was fortunate enough to get a review copy before the game’s official release. As such, I had the opportunity to go through it and see just what it is all about, so you potentially do not have to. Spoiler Alert: you might want to.

A story of unimaginable proportions! [Story]

The premise of World of Warriors lies in a mysterious kingdom where the only way to survive is to fight. This is due to the four elements (water, fire, earth and air) aligning to create portals. The portals infuse all those who pass through them with great power. They also grant instant transportation throughout the “Wildlands”, realms and dimensions. A mighty empire, which oversees the Elemental Lords, used to rule the Wildlands. When they did, they used the portals to spread peace throughout the realm.

Only peace could not be kept for long. The Darkness, a mysterious entity that wreaks havoc and disharmony, made its way onto the Wildlands. This resulted in an all-out war where the Elemental Lords combined their powers to defeat it. The result of the war was catastrophic. All lords were weakened, and the land was shattered. As a result, the lords left the Wildlands. Before they did, however, they appointed loyal warriors called Gatemen to guard the land. With the Lords gone, all portals were closed except for one. This is where the player comes in.

One portal was left open in case the people of the Wildlands ever needed to summon warriors from Earth. However, a fierce battle between a hero named Kalaban and Boneshaker has broken out. Boneshaker killed Kalaban’s warrior princess from Earth. The battle naturally caused a disparity between the lands. As a result, Kalaban has enlisted the help of Earth’s warriors (the player) to defeat the Boneshaker once and for all.

In the World of Warriors PlayStation 4 port, players can go through the campaign alone, or enlist the help of up to three friends. The campaign itself has a lot of backstories to cover, yet very little progressing story. While the story and premise are exceptionally well crafted, I found it lacking after a few hours. You get this huge premise and build up, only to get small story tidbits in-between fights with other warriors. That said, it is way more creative than many other titles releasing nowadays.

Since World of Warriors was, first and foremost, a mobile game, it makes sense that the gameplay is where the game would either succeed or fail. I am happy to confirm that gameplay has gone untouched since the original 2014 release. In fact, it has only gotten better.

In the World of Warriors PlayStation 4 port, the player must create a team of characters to battle the enemy. You can do this with Artificial Intelligence (AI), or with real-world friends. Defeating enemies rewards players with experience, money and materials. Characters have unique moves, and the elements system adds some strategy to battles (fire is weak against water and so on). Battles are unique in the sense that timing is key, and all battles take place in specific arenas.

That is really all there is to it. Although it may not sound like a lot, there are so many nuances that I do not know where to start! 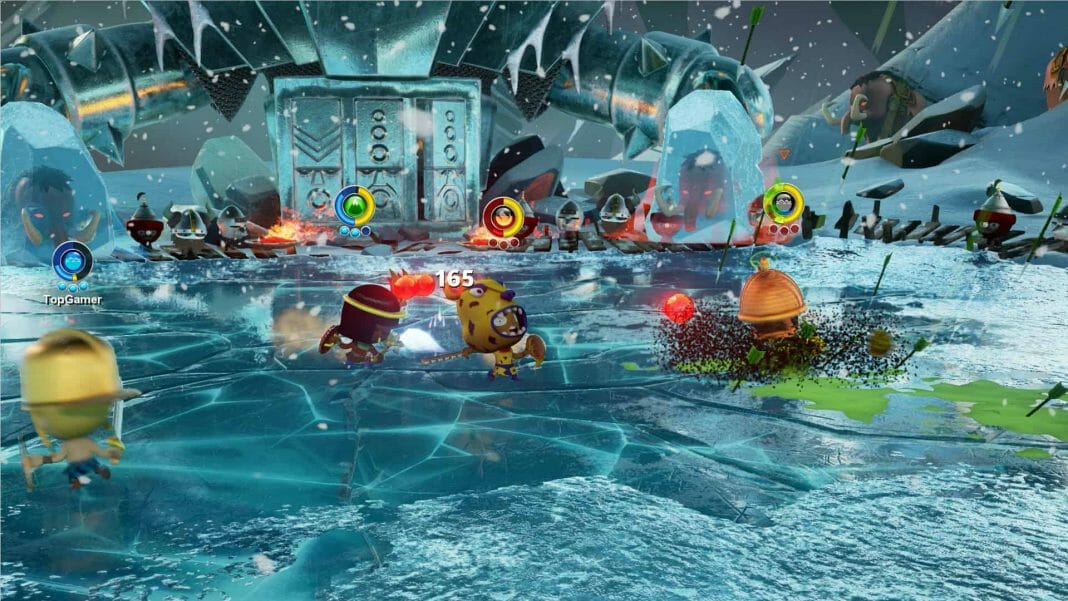 Battles are pretty cool too. While most of it happens automatically, the player can participate in them by timing actions with the actions of their warriors. I had a particularly hard time with this! Regardless, if the timing is right, attacks and actions become stronger and hit harder. I must say that this was the most challenging part for me — I am no good at rhythm games, and neither it seems, am I at timing attacks just right.

Lastly you have the arenas. These are pretty great. Every arena is a potential death trap — there really is no other way to say it. A fairly straight forward map, for example, might hide a huge axe wielding knight that emerges without warning to destroy your characters. Another might feature a bonfire with cool tiki masks, only for that fire to eventually engulf the entire play area! A particular favourite was the Sea of Night map, where the sea is a character of its own. The Titan swings his anchor and smashes warriors beneath it to smithereens while also dodging watery projectiles and hazards. All that while also having to deal with the enemy! 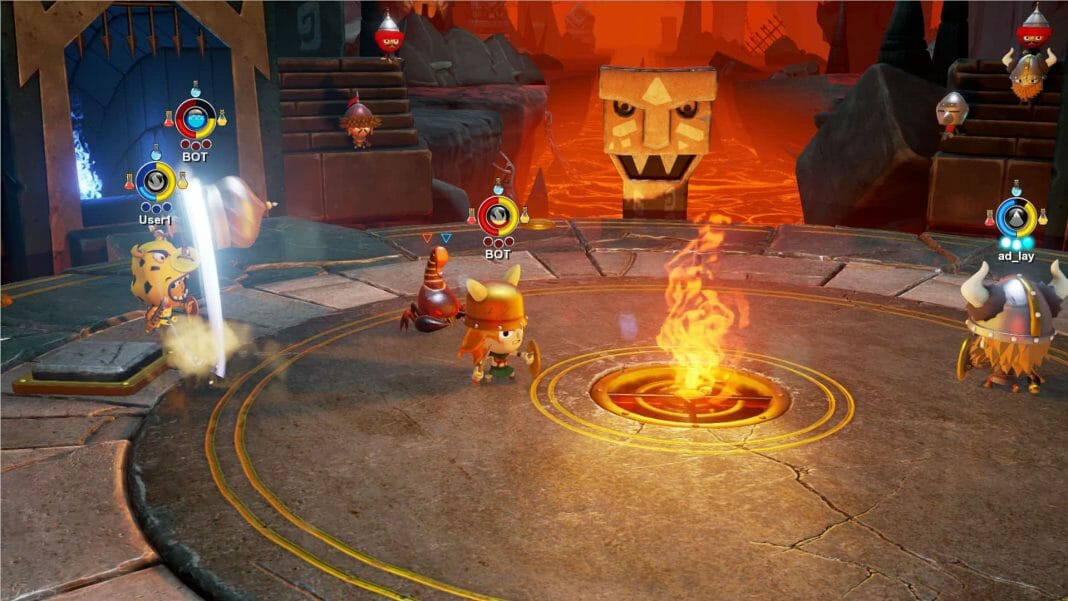 It helps that fights do not take too long to complete. After a while, I did feel like I exhausted the arena count and things started to feel all the same. I suppose you can thank its mobile nature for that!

In-between fights, you can train your crew, equip characters with new items or equipment that will help in the battle ahead, and even check on your progress. Thanks to all of that, the repetitive nature of the game is my only nitpick.

As smooth as the Bobblehead on my dash [Performance & Visuals]

The World of Warriors Playstation 4 port is a pretty game. Considering its origins as a mobile game that released in 2014, one would think that a port like this might look ugly or dated. Thankfully, it does not. The aesthetic in World of Warriors plays a big role in making the visuals seem current. You see, it is a cutesy, artsy and very “Blizzard-esque” title. There is a lot of light cell-shading and a lot of colour, which helps keep the aesthetics alive and well.

In that same vein, characters are almost loveable. They have a distinct “bobblehead” look and feel to them, with big heads and cartoonishly small bodies. What makes it even better is the fact that the game embodies that fact and plays around with it to an amazing extent. Opening chests will have characters lean their heads back in a cartoonish style while jumping and falling makes them look ridiculous, yet super cute. 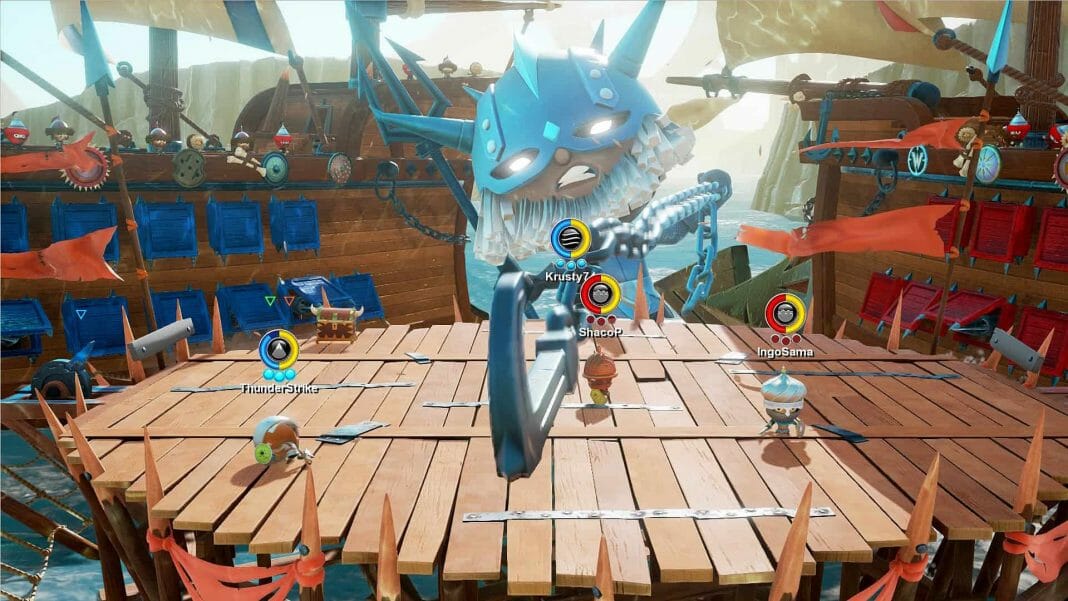 On the PlayStation 4, I noticed very little frame drops, and when I did, they corrected immediately. It must be noted that I cannot distinguish between minor frame drops as many others can, but when I do see them, it is usually very noticeable. With that said, it only happened once or twice. Similarly, loading times were quick enough for me not to worry about them in the slightest. While I do feel that the game did tend to take a while to boot up, it did not make me impatient or bored.

The game certainly has its charm. While many would shy away from mobile-turned-console ports, I really cannot say that I would. The game is fun, and I dare say extremely entertaining – even when playing alone.

World of Warriors looks good in every aspect. Menus are crisp and clear, and the game runs as smooth as you would expect from a four-year-old title. Honestly, I love that the characters embody personality through not only who they are, but also how they look. I cannot get enough of the bobblehead aesthetics!

I never played the game when it released on iOS in 2014, and to this day, I have not tried it out on mobile. With that said, I do feel that the World of Warriors PlayStation 4 port has it all, and then some. I also think it is especially suited to people who are looking for a laid-back, yet seriously competitive, experience. It is, most definitely, worth a buy.