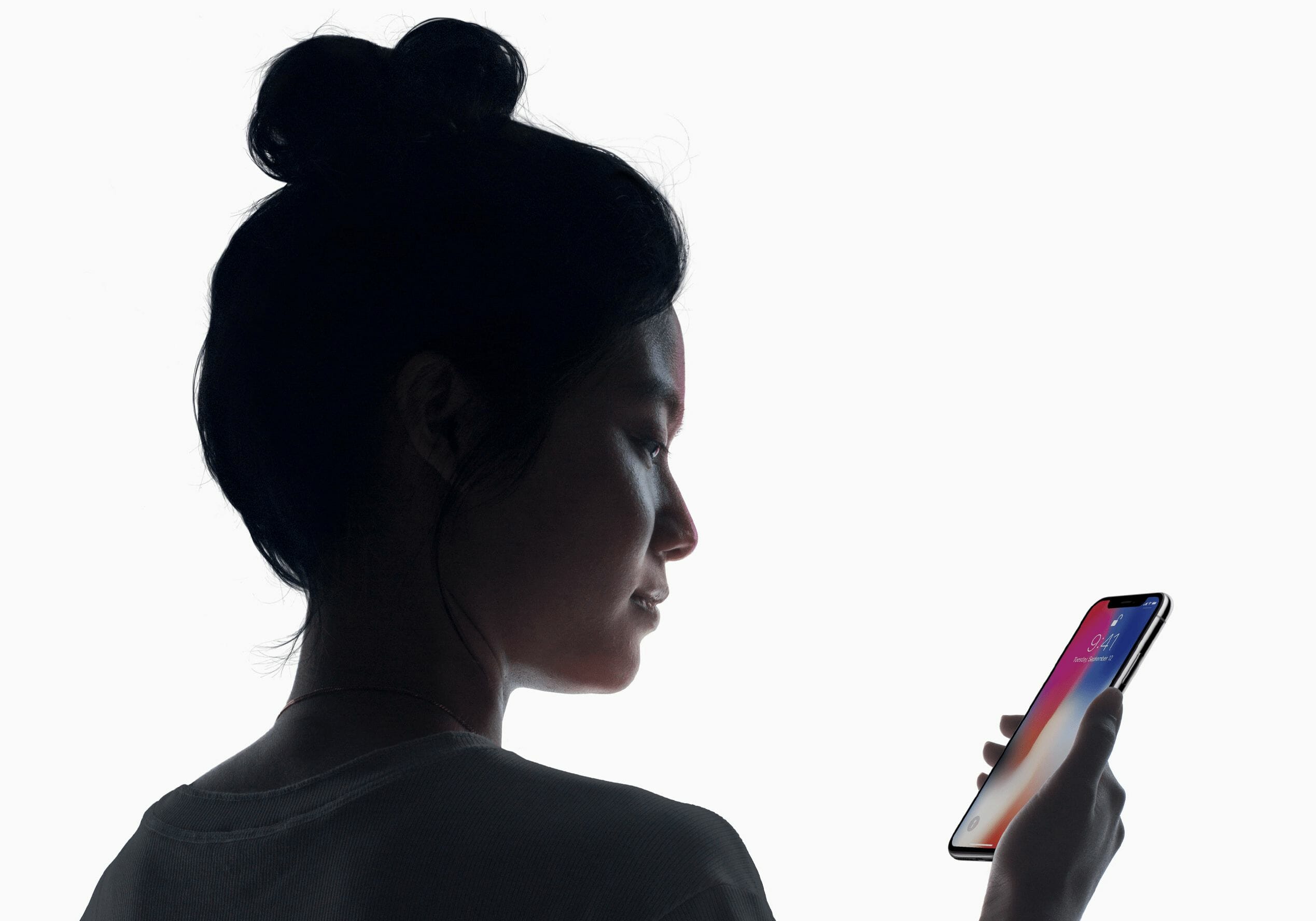 One of the most forward thinking and impressive pieces of technology on the all new iPhone X (pronounced “iPhone ten”) is the phone’s brand new TrueDepth camera that allows for Face ID. The new camera system is housed on the front of the device in a ‘notch’ at the top of the screen and includes a front-facing camera, infrared sensor, flood illuminator and dot projector. It also includes all of the other sensors that iPhones have had over the years, like a speaker, microphone, ambient light sensors and proximity sensors. It is an impressive amount of technology in such a small space.

All of the sensors in the TrueDepth camera system work together to scan the biometric facial data of the user. Doing so allows for advanced photographic effects, like depth-of-field, and the all new software based Studio Lighting, to be instantaneously implemented on the fly. The same data can be used for applications like SnapChat’s face filters, allowing for more complex and interactive experiences. However, the biggest and best new addition is that of Face ID.

Face ID is the all new successor to Touch ID, which was first introduced with the iPhone 5s in 2013. Touch ID uses a persons fingerprint for identification, and quickly became the gold standard for biometric authentication on mobile devices. So much so, that it allowed Apple to introduce secure payments via Apple Pay and it even had an influence on US legislation [law enforcement can legally ask a user to provide a fingerprint to unlock a device, but not a passcode]. It is currently the primary means of authentication on almost all of Apple’s devices, even its Pro series of laptops use it. However, that is all about to change with the introduction of Face ID, which Apple feels is good enough to completely replace Touch ID on the new iPhone X. 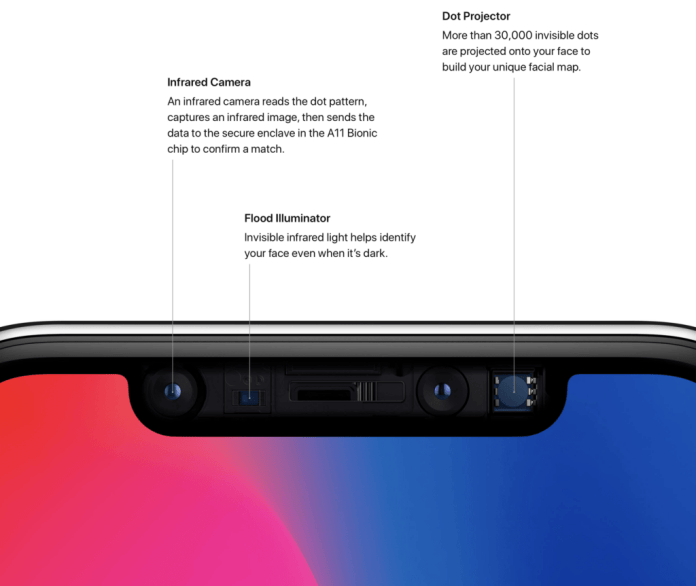 According to Apple, the TrueDepth camera system projects over 30 000 invisible dots on to your face to build a unique facial map. It then captures that facial map with infrared cameras, and uses the new A11 Bionic chip’s ‘neural engine’ to process all of the biometric data in real-time. It goes without saying that this is quite an ingenious feat, especially when considering the scale at which it is all taking place – from a notch that is less than 3 x 1 centimetres in size.

Although other phones have had a ‘face unlock’ feature for some time, Face ID is different because it actually captures a full 3-dimentional biometric image of a users face. That includes the shape of muscles and even unique pigmentation that may be present under the first few microscopic layers of skin. It is good enough to tell the difference between twins, apparently. Thus making it very difficult to fool with contact lenses, printed pictures and even Hollywood created prop faces. It would probably even be able to deny Arya Stark entry into your phone. At least, that is how Apple is currently marketing the system. 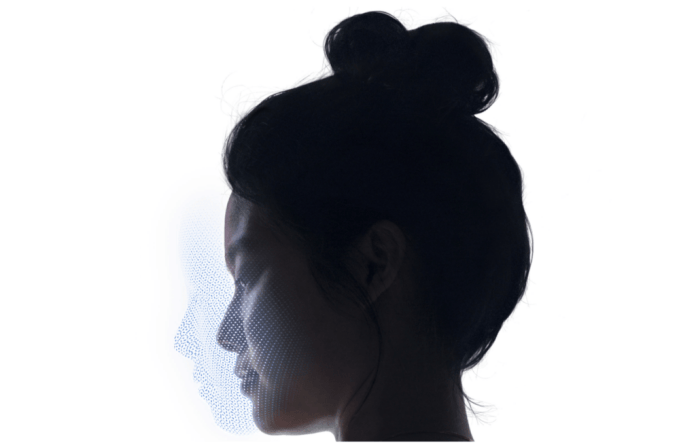 According to Apple, the system also uses advanced neural networks to learn how faces change, and can therefore take into account changes like haircuts, hats, spectacles, and beards. It will, apparently, learn more about your face over time. Therefore, Apple feels that Face ID is more secure than Touch ID. The company even relayed a statistic to this effect, citing how there is only a one in a million chance that someone else’s face would be able to unlock your phone, compared to one in 50 000 for Touch ID.

As great as it sounds, there was a moment during Apple’s keynote where Face ID appeared to “fail”. This immediately caused a lot of people to assume the worst. Interestingly enough, and on closer inspection of the footage, it actually turns out that Face ID was not enabled. Anyone with an iPhone can tell you that if the device is turned off and then on again, or left alone for a lengthy period of time (more than eight hours), or if the incorrect fingerprint has been used multiple times, that iOS will require the passcode to reactivate the biometric features. This is technically what happened on stage when Craig Federighi, Apple’s senior vice president of Software Engineering, tried to demo it live for the first time. Despite this unfortunate turn of events, it appears as if Face ID actually does function surprisingly well.

Courtesy of Bloomberg’s Mark Gurman, who was in attendance at the event, there is a semi-clear video of exactly how Face ID works (embedded above). From enrolment through to unlocking and activation in applications, Gurman does a good job of testing out Apple’s most innovative new feature in the iPhone X. The most surprising aspect is how fast Face ID is able to recognise the biometrics of an authenticated user. It looks like the entire process takes milliseconds, and could very well be as quick as Touch ID. The system really does seem to ‘just work’.

Although Apple does mention that Face ID will work with “glasses”, it is important to note that all of those shown were, in fact, spectacles with clear lenses. The company’s wording is vague enough that “sun”-glasses may not be included. As such, it is quite possible that the TrueDepth camera system may not be able to pass through glass or plastic that has been coated with a reflective substrate. Only time will tell, but I will be the first to admit that this would be very inconvenient, especially in summer and when outdoors.

Of course, the true test of Face ID will occur once the iPhone X is in the wild and in the hands of users around the world. As someone who identifies as an early adopter, I am extremely excited for the iPhone X, and will absolutely be investing in this phone once it launches.