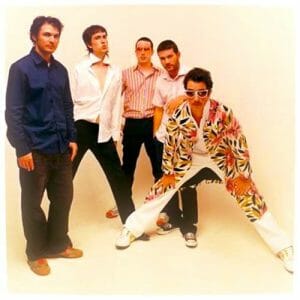 Anyone familiar with the television series Suits should be aware of the addictive funky melody that airs during the show’s title sequence. What many people may not know, however, is that the song that plays is called ‘Greenback Boogie’ and is performed by a group known as Ima Robot.

Unfortunately, there is not a lot of information about Ima Robot as the band appears to have never attained sustainable commercial success or interest. The truth is that if it was not for the USA Network’s Suits no one would bother to find out who they are. In fact, other than a sparse Wikipedia entry, the only other hits for Ima Robot on Google are those for the band’s official site, song lyrics, Facebook and, of course, pirating the song ‘Greenback Boogie’.

Nevertheless an official music video exists for ‘Greenback Boogie’ and it showcases the possible mischief that occurs in nightclub bathrooms while featuring characters such as Spider-Man, Father Christmas, zombies and nuns, among many others.