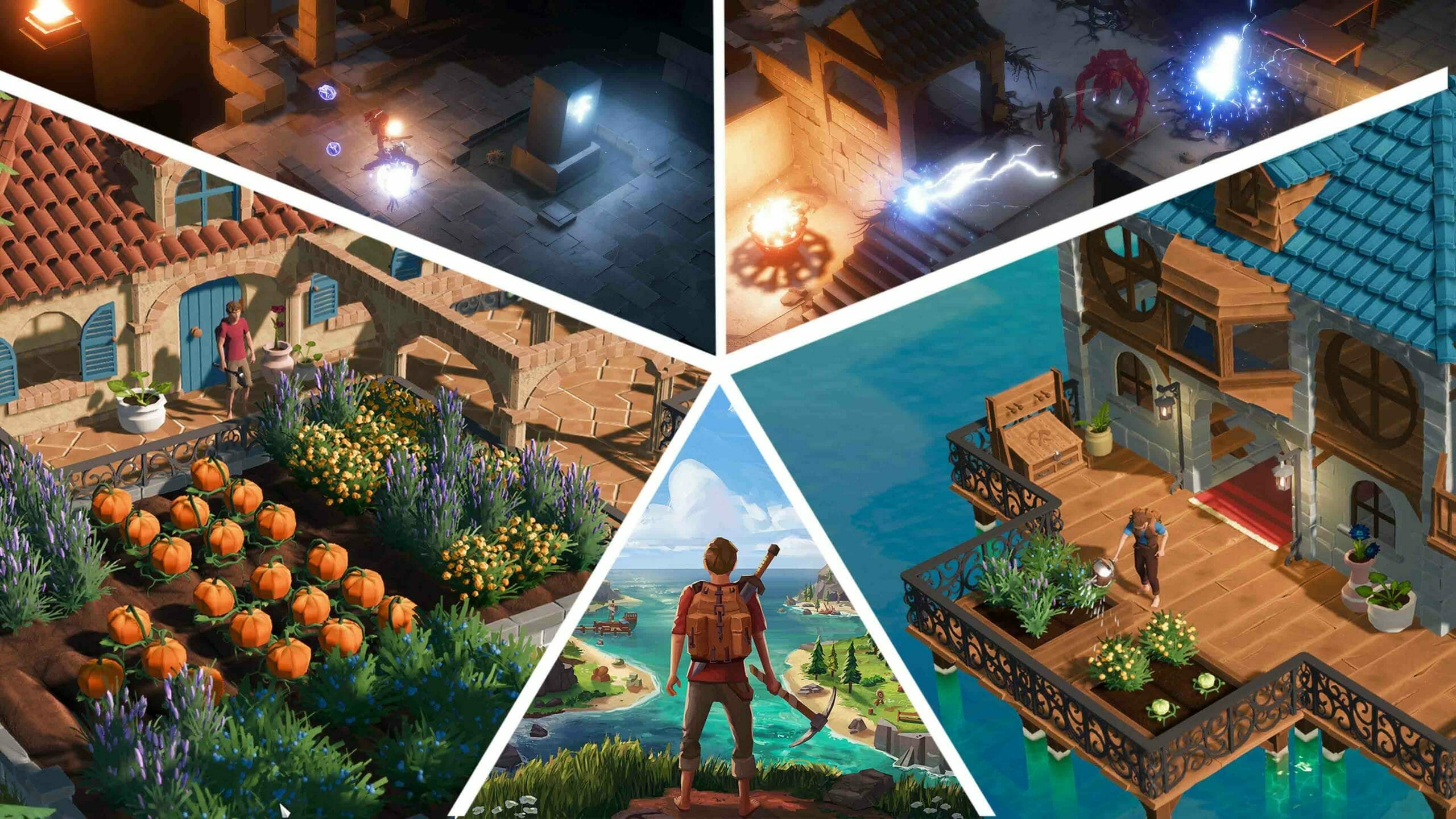 Creating a good survival game, one which will stand out in a sea of similar titles, is a lot like being the star act in a circus. In order for a new game in this genre to succeed in 2022, many elements need to be pulled off and brought together. If even just one of these steps are slightly off, everything starts to fall apart and unravel. The world the game creates needs to be intriguing enough to make players want to explore it; combat needs to be fluid and responsive – lest the game feel like a frustrating slog, and building needs to be intuitive. While at the same time, gathering resources needs to offer a challenge, but also not turn into a chore. How does Len’s Island fair in this regard?

Len’s Island is, at its core, a survival game created by Flow Studio. It released into Early Access after raising AU$ 58,579 on Kickstarter, and aims to juggle all of the aforementioned elements while also adding plenty of new balls to the act along the way. Not only is Len’s Island a survival simulator, but it is also a dungeon crawler harkening to other genres and titles; such as Stardew Valley with its focus on farming and Raft with its building mechanic. Throughout it all, there is one singular goal Len’s Island hopes to achieve: to get the player to leave the comfort zone of traditional genres and find enjoyment in freedom versus a strictly guided adventure.

Len’s Island starts with the player stepping into the titular character’s shoes, equipped with only some tools and a backpack. It is up to the player to build a brand new life for themselves on the beautiful island the character awakens upon, all while trying to unravel the truth behind some dark secrets along the way. I have spent the last few weeks slowly grinding away at the currently available content within Len’s Island and have put together a list of three reasons why I believe you should keep your eye on this game, or risk missing out on something truly special.

The Farming – It’s A Farmers Life For Me

One of the first comparisons drawn from Len’s Island would be to games like Animal Crossing, courtesy of the strong farming aspect. However, while being similar in its approach to farming, Len’s Island also mixes it up a bit. While inventory management is usually a core aspect of farming simulators as players carefully balance having enough space for their tools, seeds and harvestable; Len’s Island does none of that. Instead of the game requiring the player to make decisions on what to carry in the backpack, Len’s Island automatically adds every collected seed or resource to its very own, infinite inventory space.

If there is a need for anything collected, drag it into one of the four hot-bar slots and use away. When done, simply drag it off the hot-bar, and the game will automatically put it away again. While removing the inventory management system may sound like an essential part of the game is missing, the reality of removing the constant juggling act means when you want to spend time farming, you can just allow yourself to enjoy the task at hand with no bothersome distractions along the way.

As with most aspects in Len’s Island, farming is straightforward. Favouring function over form and cutting out a lot of the bloat that other games have. Build garden beds, plant seeds found throughout the world, and tend to those crops. Players can then use what they have grown to either aid themselves throughout exploration and while dungeoning, or they can sell to nearby villagers for gold. Gardens can be planted throughout the island while playing or grown on a smaller scale right by the player’s house. Furthermore, if farming is not the way you choose to enjoy Len’s Island, pot plants can give your surroundings the green aesthetic without getting Len’s hands dirty.

The Building – Brick by Brick

Another way to enjoy time within Len’s Island is by diving into the building part of the game. The game boasts a pretty extensive catalogue of prefabricated plans to build. Alternatively, the game also allows for the player to go crazy and let their mind run free while building to their heart’s content. All of the building works on a modular system, and while it is not quite as smooth and intuitive as the rest of the game; after a bit of trial and error, players should be able to build the house of their dreams without much fuss. Furthermore, players can then spend their time channelling their inner Martha Stewart and decorate it to their unique tastes after the house is built.

While Len’s Island is not a house building simulator, the choices given are varied enough that it genuinely feels like a playground when you get the hang of the building mechanic. As of now, the house itself serves minimal purpose other than giving players a visually attractive space to lay their heads after a long day, but it would be interesting to see if this aspect of the game is further built upon as development continues.

The dungeons are where Len’s Island truly comes into its own. The rest of the game has a decidedly relaxed and calm atmosphere where players are never rushed or pushed too hard. The dungeons, on the other hand, change that atmosphere and dynamic completely as they are fast-paced and very time driven. There is a timing system in place throughout the game whenever you use any of your tools or weapons. Rather than allowing you to hold in a button to attack or harvest a resource, the game encourages players to always to be vigilant and focus on the task at hand. It achieves this by implementing a critical hit timer allowing for faster progress while exploring or lets players land critical hits while in combat.

Each tool and weapon in the game has its own critical hit timer. While learning each of these timers makes your work more efficient while out exploring, it can mean life or death in the dungeons – which are crawling with aggressive monsters who seem to be waiting to rush you constantly.

Even though Len’s Island is still in early access, the game holds excellent potential, and I look forward to checking in on it again in the future to see what has changed. Len’s Island will probably not hold much appeal for hard-core survival game veterans who are in their element while playing games such as Project Zomboid and Rust; however, it does not need to.

Len’s Island is very clearly aimed at players who want to play a survival game focused more on the overall experience and world-building rather than end states. There are a fair share of wrinkles throughout Len’s Island (it is an Early Access title, after all), but when it all pulls together, it allows players to feel strangely at home within its boundaries yet also different enough to make it genuinely incomparable to anything else currently available.