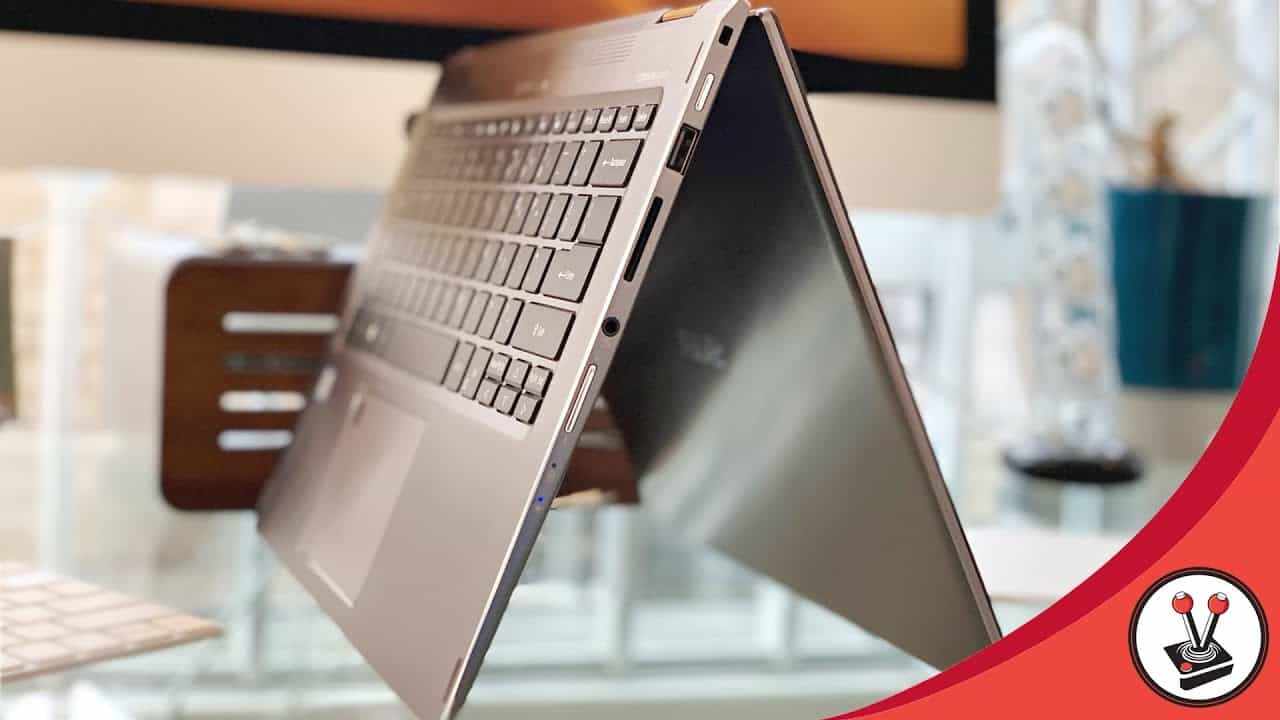 Acer, as a brand, is well known for excellent build quality and incredibly well-specced laptops. More recently, the company has entered the 2-in-1 notebook/tablet hybrid market with their Spin range. A line of laptops that feature stylus pens, modern builds, high-resolution touch screens, and incredible battery life. Vamers received the Acer Spin 5 for review, and at first, it seemed like a nifty little device. After several weeks with it, however, it is quite clear that this hybrid does not know what it really wants to be. 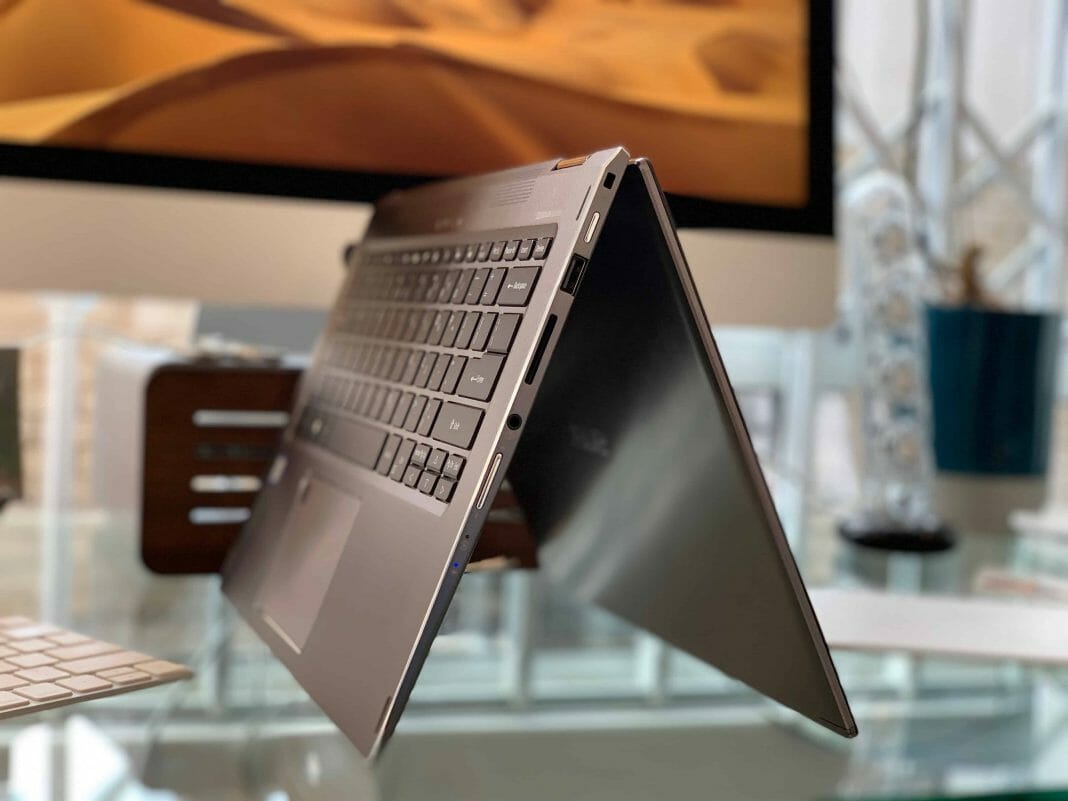 The Acer Spin 5 slots right into the middle of the range, between the Spin 3, and Spin 7. Our review unit is equipped with an 8th Generation Quad-Core Intel i5 processor that runs at 1.60 GHz, with a boost speed of up to 1.80 GHz. It also comes packed with Intel’s proprietary UHD graphics 620, with shared memory; a 13.3-inch full high-definition 1080p IPS display with accurate touch screen capability; 8 GB DDR4 SDRAM, and a 256 GB SSD for storage. Considering its specs, it sits dead centre within the Spin 5 models on offer, and has a similar specification to the weakest of the Spin 7 models. The Acer Spin 5 also features two USB 3.0 ports, a USB-C port, a single 3.5mm audio jack, an HDMI-out connection, and an ethernet port.

The Acer Spin 5 boasts a modern metallic build that feels rock solid and cool in the hand. It looks sleek and modern, and seems rather premium when viewed from afar. Unfortunately, this premium design does have a draw back: weight. The Acer Spin 5 comes in at just around 1.5 Kg (three times heavier than the Apple iPad Pro 10.5″). At first, this may not sound like much, but when you consider the fact that the Spin 5 is meant to function like a tablet, thus being in your hands or on your lap all day, the weight becomes noticeable. I only ever used it in tablet mode when I could propel it onto a table or leave it lying on my lap, because of the weight. As a result, I found that the weight distribution is just so much better when it is in its laptop form, which quickly became the preferred way of using it. 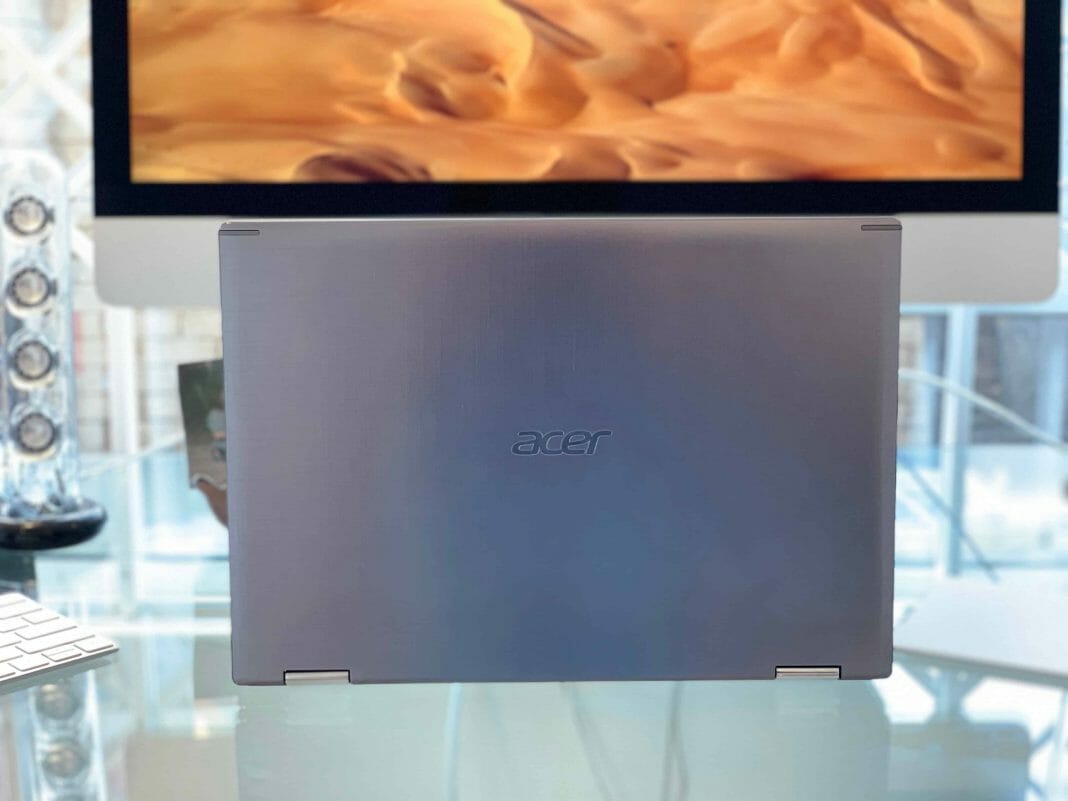 It also comes equipped with a fingerprint sensor, which I seldom used. Not because I did not want to, but more so because it was super finicky and, quite honestly, not needed. It is installed into the corner of the trackpad. Although the corner of the trackpad is not a bad place for it, I do feel like it would have had a much better fit if it came installed into one of the far corners of the base – you know, where you would normally find the power button. 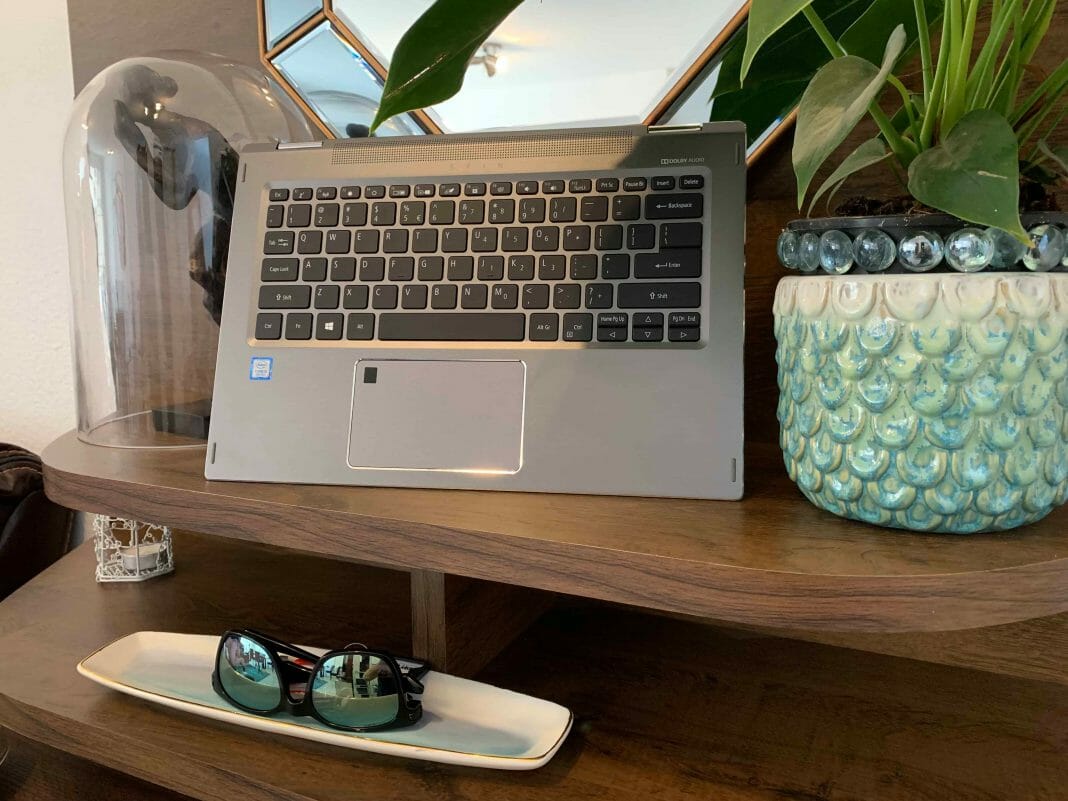 On that topic, I must also note that the power button itself has moved from the traditional location on a laptop (normally on the top right or left of the keyboard) to a much more “tablet” friendly location on the side of the base. I got used to this rather fast, but it still felt strange when I tried to power the laptop on or off, and had to feel around the edges of the device just to do so. Likewise, it also features volume buttons on the side. This is something I personally liked quite a bit since laptops nowadays all resort to half-baked function keys to get the job done.

The display is an odd feature, one that I am still unsure about. Specifically in terms of whether it is good or bad. Off the cuff, it is nice and big – way bigger than the 9.7-inch iPad that I am used to using. I love this fact. What I do not like as much, however, is how the bezels around it make it look dated whenever it is open and sitting on a table. This is a strange design decision, considering how beautiful and sleek it looks otherwise. The large bezels do help the already-troubled tablet mode. 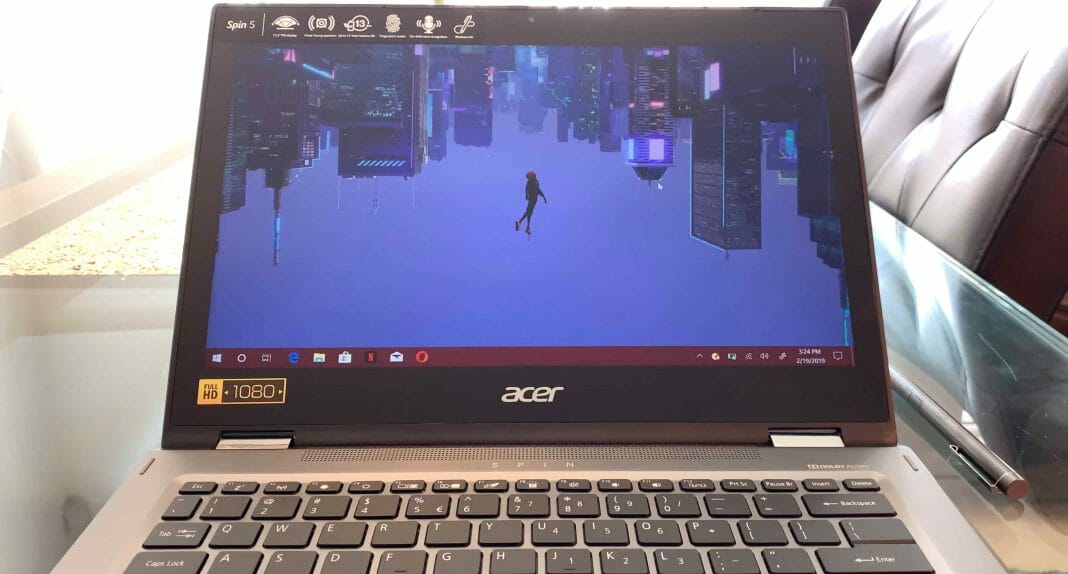 Lastly, in terms of hardware, the Acer Spin 5 rocked the stylus like a pro. I have no love for styluses in the least, but I do recognise that they can be useful in specific situations. Considering the fact that the Acer Spin 5 runs on a full-fledged version of Windows 10, the stylus ended up coming in really handy whenever the baked-in tablet functionality of Windows 10 would just not cut it.

With the stylus, I could make precision clicks, and do decent drag and dropping without worrying about getting smudges all over the screen. It also removed a lot of the user error that you often see when using Windows 10 in tablet mode. The only con I have for the stylus is that I had nowhere to put it half of the time. It looks neat, and fits the Acer Spin 5 like a glove. A pity then, that the Spin 5 has no pocket for the glove to go on when not needed.

Beyond actual hardware and design, the Acer Spin 5 is a real heavy hitter where it matters most: everyday functionality. The Spin 5 features an incredible set of specs for its price, as long as you have no interest in gaming. 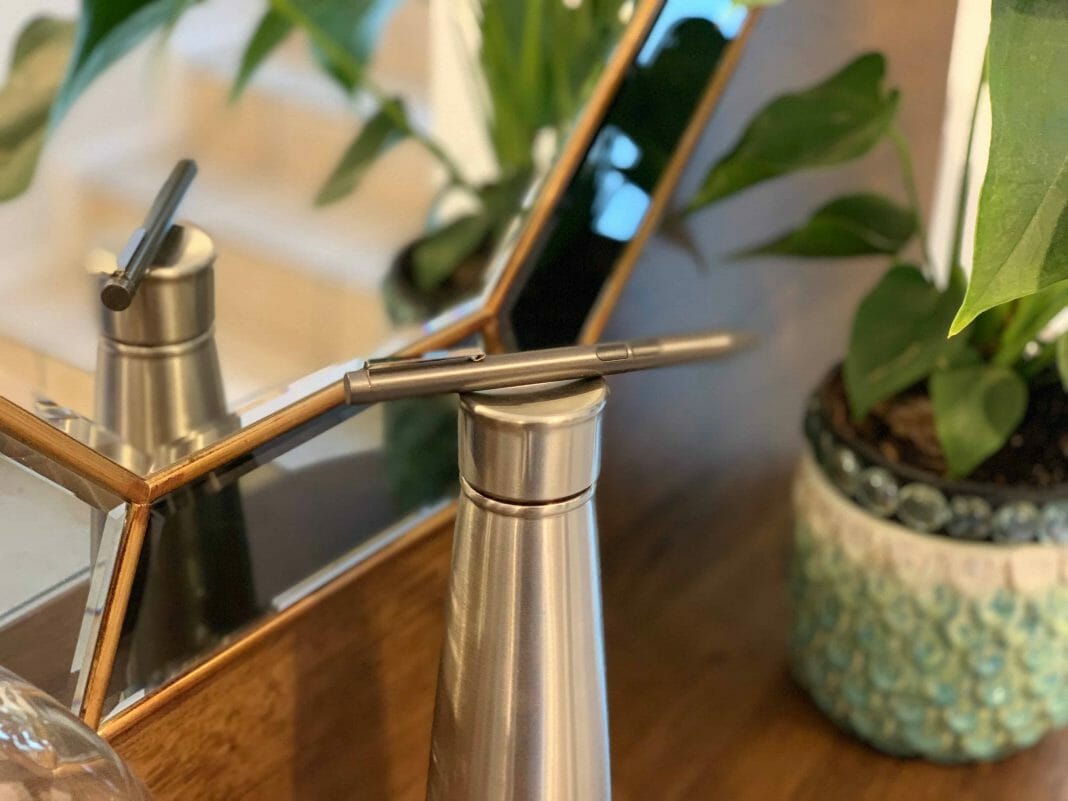 During my time with the laptop, I tested Monster Hunter: World, and PlayerUnknown’s Battlegrounds (PUBG). While both games actually launched and worked fairly well, the device had a hard time during extended play. Frames dropped noticeably during graphically heavy scenes, and the more I played, the more it started to chug. It also got very hot. If you are interesting in playing games, you would be way better off with a much more expensive MSI Phantom, or Asus gaming notebook.

When you do have to push the Spin 5 to its limits, it does an amicable job of not showing signs of stress. While it will not net you much in the way of gaming, it will give you nine long hours of sweet, sweet word-smithing, coding, or whatever else it is normal business people do all day. 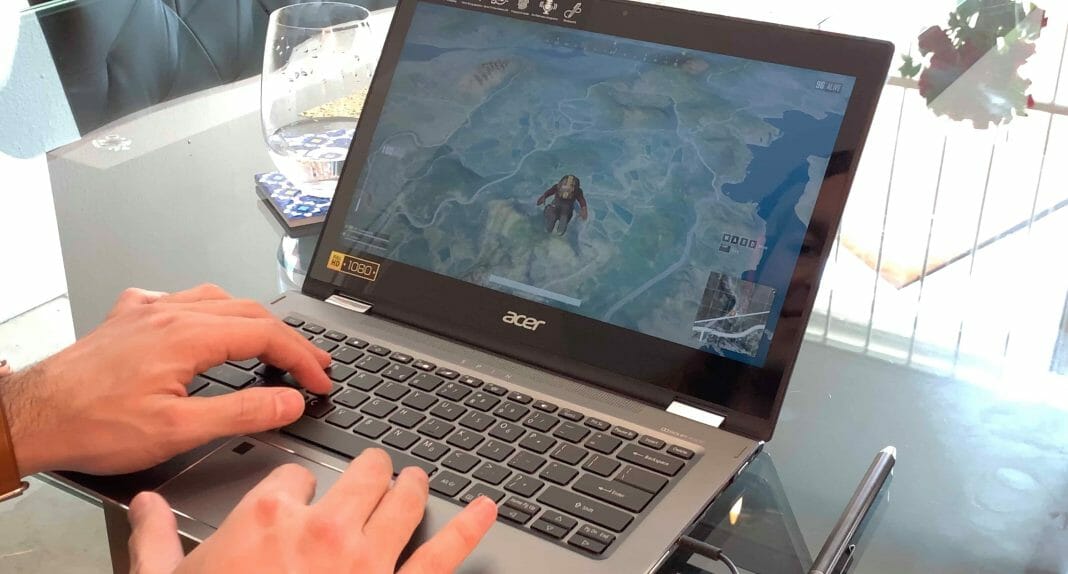 The bottom line is that the Acer Spin 5 is a neat little laptop. It has decent specs and lets you get through a day’s work on one charge. It looks good and plays well whenever it remains in its comfort zone. Push it a little harder, and it will start to vigorously cool itself down (but never so much that it feels like you have a jet engine on your lap). The biggest issue I really have with it is that it does not know what it wants to be. Or rather, it only does one of the two things it can be, very well, and that is being a laptop.

The issue, then, has nothing to do with its specs, or the way it looks, or works. Rather, because it makes for a very good laptop, and a not-so-great tablet, it does not deserve to be priced as such. In South Africa, the Acer Spin 5 can be purchased for around R14 000. By paying that amount, you get a laptop that wants to be a tablet – but never really succeeds at the latter. I can get exactly the same specs from a normal Acer laptop, for at least R5 000 less, and that is where I have to draw the line: good laptop, bad tablet, unreasonable price.