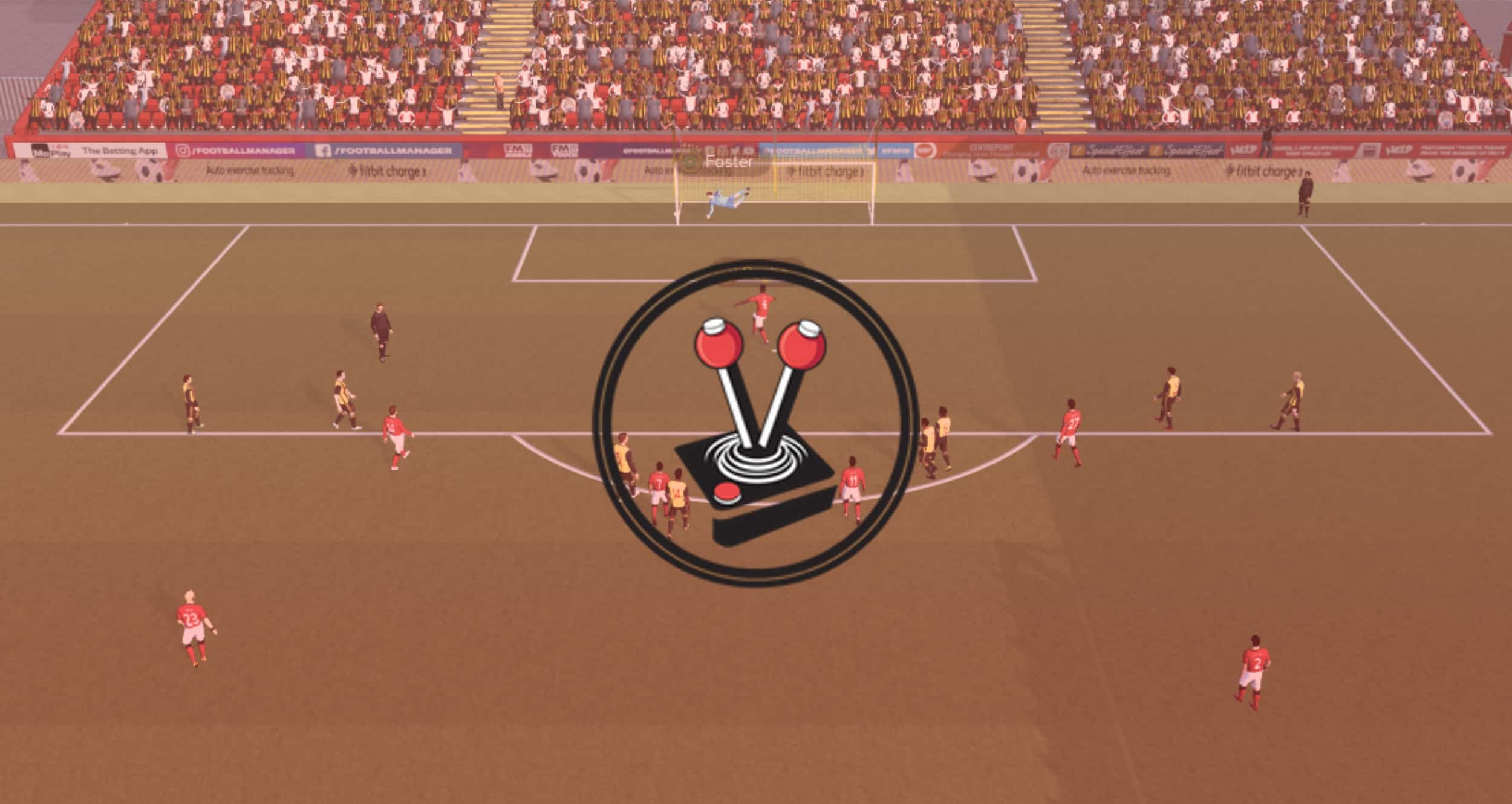 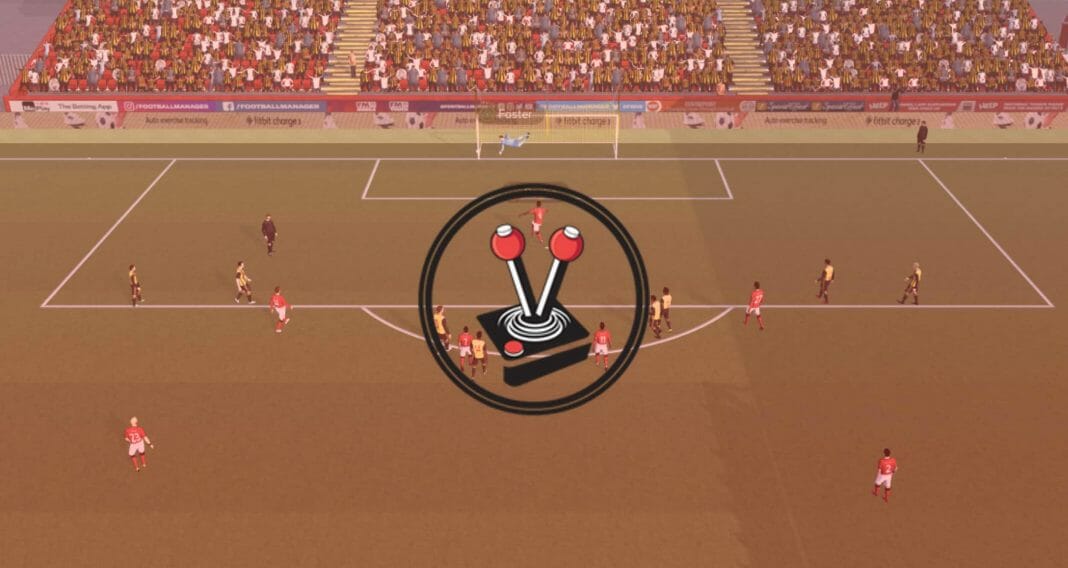 Compared to its predecessors, Football Manager 2019 has had some of its core functions redesigned in order to make it easier for new players to work with, but not necessarily to understand. It is a very hard title to master, and mastering it was but one challenge I vowed I would be able to overcome. In this Vamers Football Manager 2019 review, I go over just how enjoyable this challenge was. 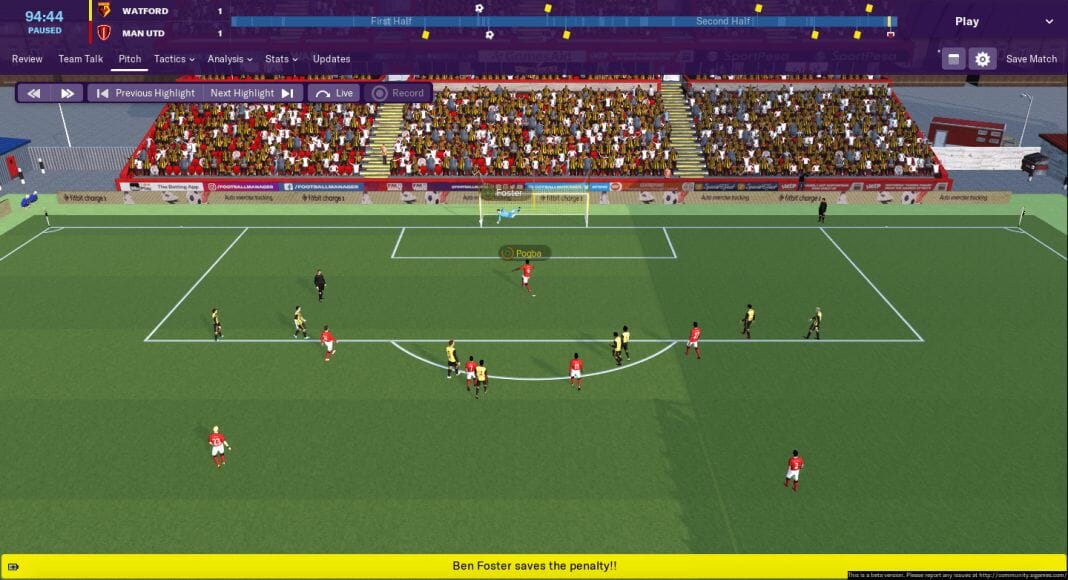 Football Manager 2019 is very much a simulation title about managing football. Gameplay consists of taking charge of a professional football team and signing players, merging contracts, and managing all kinds of things that make it feel like a job more than anything else. In terms of narrative, the most you will get out of Football Manager comes by way of seasonal plays, contracts, and the like. It does, after all, mimic every single facet of an actual football manager career.

Career Mode is pretty much exactly what you would expect from a football title. Only this time, it has nothing to do with actually lobbing the ball around on the field. Instead, it is your job as manager to, well, manage the team, choose its tactics, get the hype going so fans can buy tickets, and lots more. 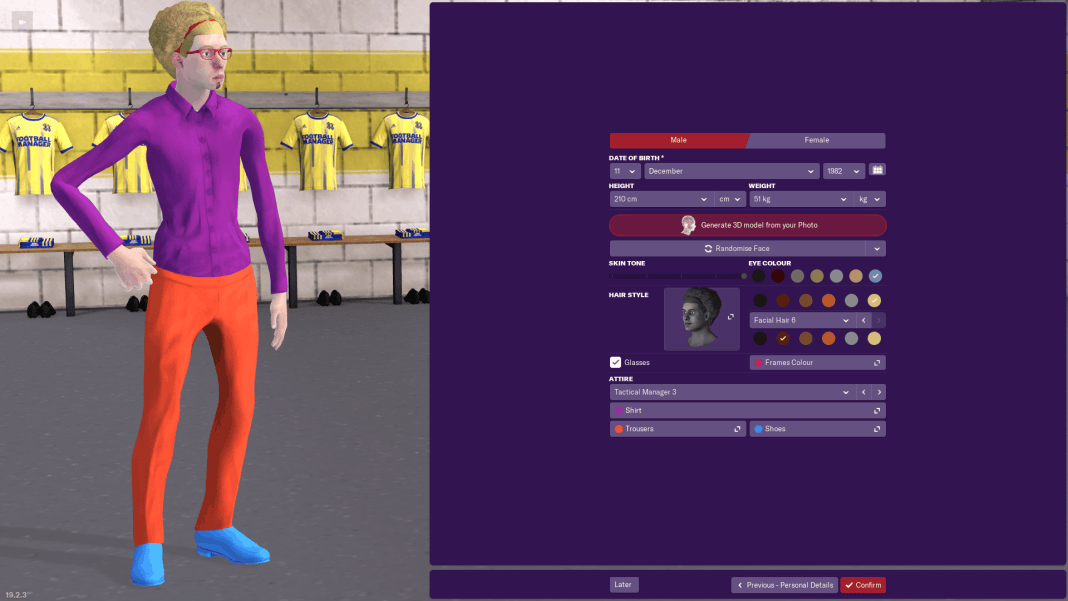 Besides answering emails, attending meetings and changing up the team structure; you also have to manage training, reserves, and pretty much every single other facet of football. After all that is done, you can stress your butt off as your team performs really badly on the pitch thanks to all the wrong decisions you made along the way. After the matches are complete, the process is rinsed and repeated – ad infinitum.

I must admit that this game is not at all my cup of tea. It took me a good long while just to get used to the basic ins and outs. While the game offers inductions and training modules for pretty much every single thing you can do, it never adequately explains the what, why, and how, of many of the management systems at your disposal. It also does not help that I have minimal knowledge, at best, about football. 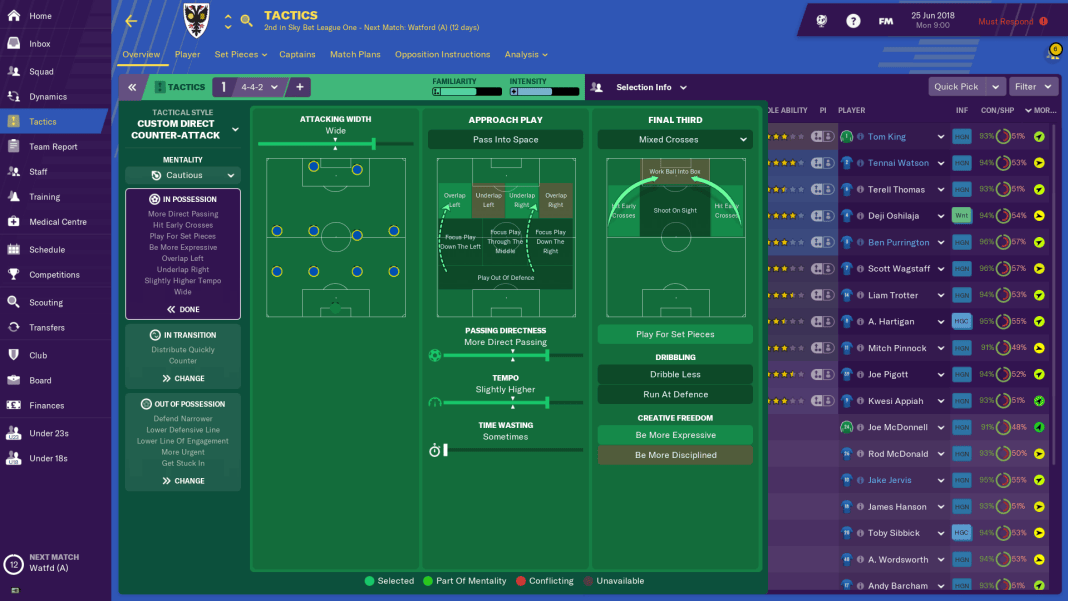 Unless you are a veteran of this franchise, Football Manager 2019 makes it feel like you are going to work. Besides expecting you to manage every single little detail about a professional football team, it also features an industrial-looking graphical user interface that is decidedly purple, with not a single music track – and I do not know what to make of that.

Part of me wholeheartedly embraces the game that is Football Manager 2019. I adore how intricate and nuanced the interface is, and how much of a focus there is on creating the best football team that you can. I also particularly like the purple and the very graphic-novel design that actions such as meetings and financial board meetings adopt. 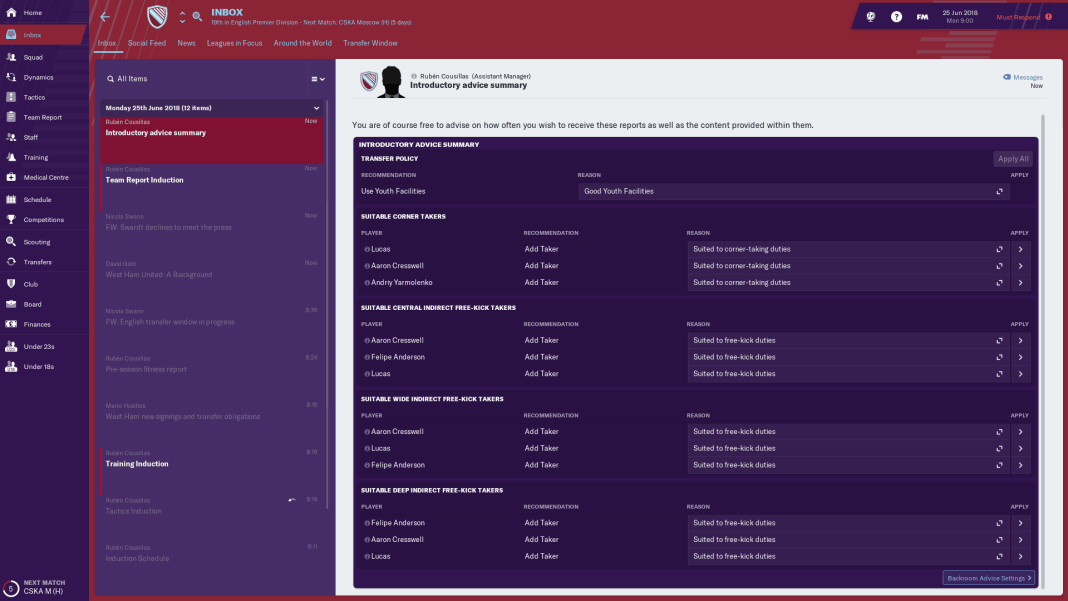 From answering emails and checking the social feed after every session, to talking with the team, hiring new staff, checking up on their health, switching out their training regimes to properly counter the next team you will face, and even talking to fans and press; it is a super intricate affair that requires the utmost attention. After a while, you do not even notice the distinct lack of music!

However, another part of me finds an issue in all of this. This is a hardcore simulation game that features pretty much every single aspect of managing a football team. I recognise the fact that it is an in-depth title. The thing is, however, that hardcore simulation games like Project Cars 2 and Assetto Corsa (the kind of simulation title I often play), still have music and decent-looking graphics.

It is also a very daunting game. Sure, the further you progress and the more you play, the easier it becomes. I am a fast learner and fortunately managed to lead my team to victory more than once after the first few initial hiccups. I also led successful PR campaigns and went on decent press junkets during match hype phases, but I simply did not enjoy any of it. 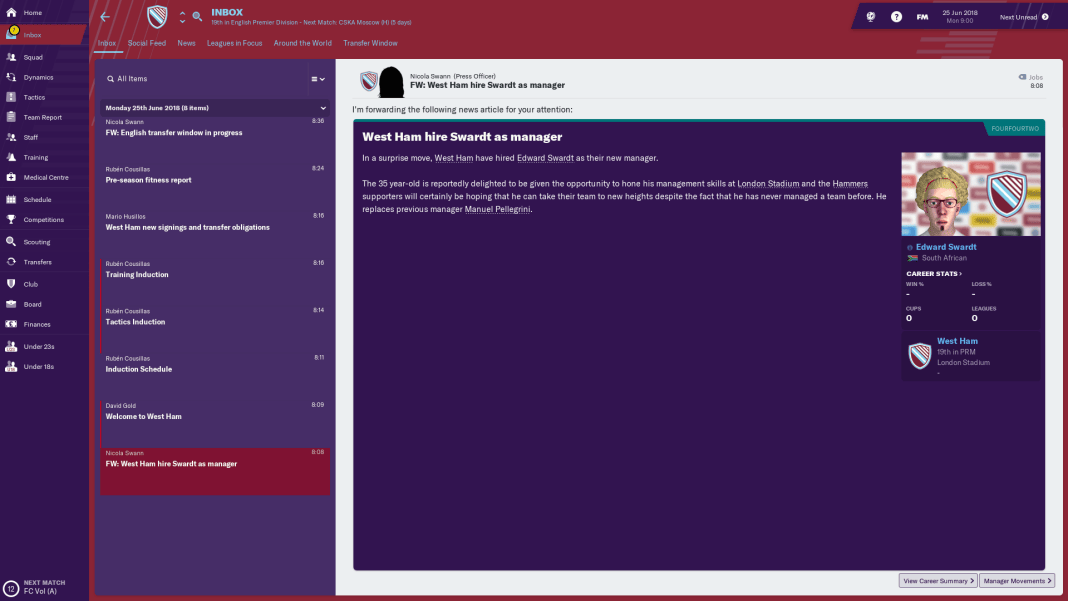 I will admit that I appreciate how much the Football Manager 2019 translated into real-world football. I understood what most phrases meant, and I grasped the concept of tactics and team management easily. The tactics section, for one, is easy enough to understand, which is good since you will spend a lot of your time in this section. There are three main options to choose from: “In Possession”, “Out of Possession”, and “In Transition”. These, of course, refer to the ball.

Each of the options then has further options that dictate your team’s playstyle during every phase. From here you can dictate exactly how your team will approach certain plays, and how they will approach the pitch and final third. You can also set your defensive line, and dictate how much of an offence you will like to have during the phases of the play you are in. Honestly, when you cannot handle a press conference, or manage your team’s stats well enough, a good play on tactics will always bump up your chances of success.

Fortunately, if you are not one to create your own tactics, you can also choose from a variety of presets. Each preset also has its own recommended formation. While these are nice, I ended up tweaking every part of it from the beginning. This is the easiest way to learn what everything does. Every part also has its own induction, which will attempt to educate you on what this particular section is all about and how you go about creating a serviceable tactic.

This is not a pretty game, and I guess it is not meant to be. From the onset, the game lets you create your profile. You do this by going into a character creator, followed by a document where you insert all of your information. This will generate an identity card that will be using throughout the game. This ID includes your full name, date of birth, preferred team, nationality, and more. In a way, it is the game’s way of having you quickly enter into career mode, without forcing you to go through clunky menus in order to choose teams, players, and more.

As I previously mentioned, there is also one thing that you will notice right from the get-go: purple. Everything. Is. Purple. Granted, I like purple a lot. Yet it just feels extremely arbitrary for the game to have this colour scheme when much more conservative colours are available to choose from. If this was done to reduce eye strain, sepia-themed colours such as light brown would have been a much better option. If this was done for the aesthetic reason only, I suppose the colour of the year is purple? 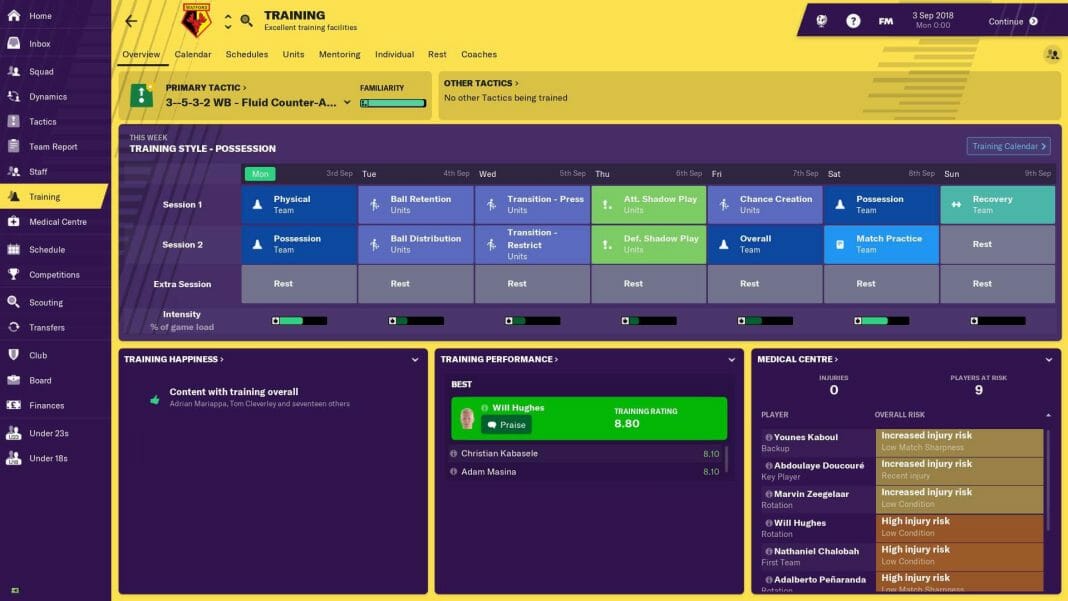 Regardless of the main colour, the game also features a very easy to read interface. Tabs are well designed, and adequately spaced. Sections within tabs are also obviously marked. Emails that need attention will always be marked as unread until action is taken, and text is a decent dark grey and black which contrasts beautifully with the purple, teal, and grey interface.

The biggest complaint I have for this section comes by way of loading. For a game that is primarily text-based, it contains a heck of a lot of loading! When you save your game, it takes forever, and when you load your game, well, it definitely does not load everything. I suppose the game is meant to be as light on system resources as possible. I do not think my graphics card fan even activated once while I played the game! I just wish that it would be a little heavier on looks for systems that can, obviously, handle it. 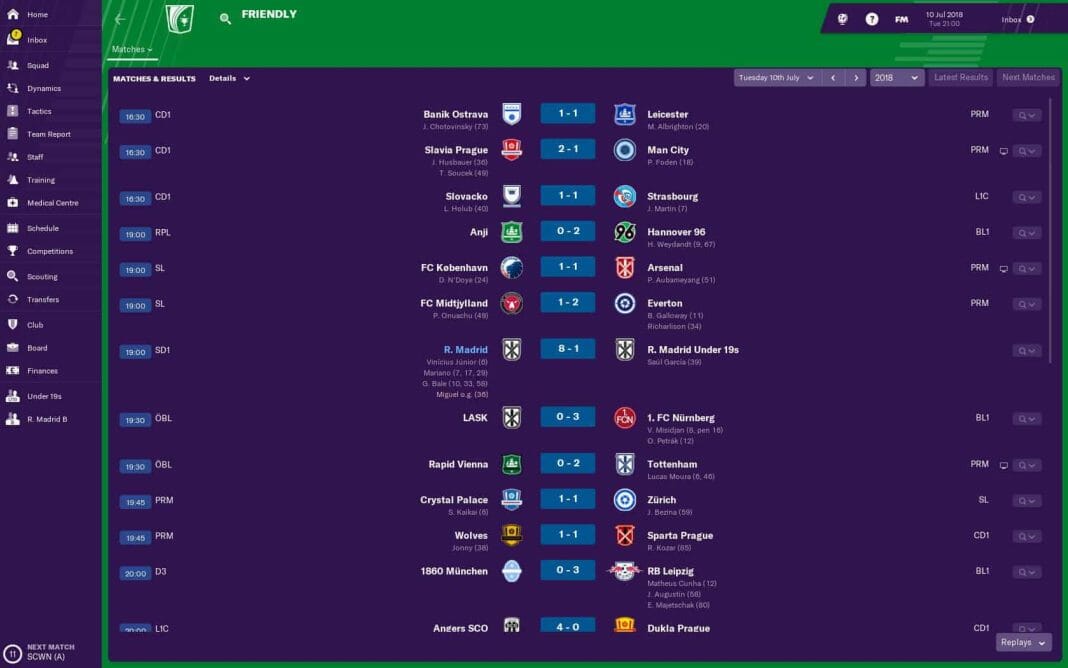 GOAL – if you have the patience [Conclusion]

Football Manager 2019 impresses with how nuanced it can be. It is one of the most hardcore simulation titles that I have had the pleasure of playing! Besides the distinct lack of musical queues, it features a hefty career mode where you have to manage every single aspect of a professional football team. You can start out with your favourite team, and manage it right into the gutter, or pluck it out and skyrocket the team to greatness. All depending on how well you do the actual management.

I adore how well put-together the game is. It has a certain charm that I did not think I would come to appreciate. After several hours of playtime, I was enthralled, and I knew had to learn more. Overcoming the tribulations of being a total amateur at the job, and actually managing a fictional team of professional football players, was severely rewarding.

In conclusion, I have to admit that Football Manager 2019 is not for anyone. I loved the challenge of learning how it worked, and then the continued stresses of performing well. However, for many, games are meant to be entertaining. I did not enjoy the game in that sense. I did, however, enjoy the challenge that came from learning the game… and that is still a win, right?