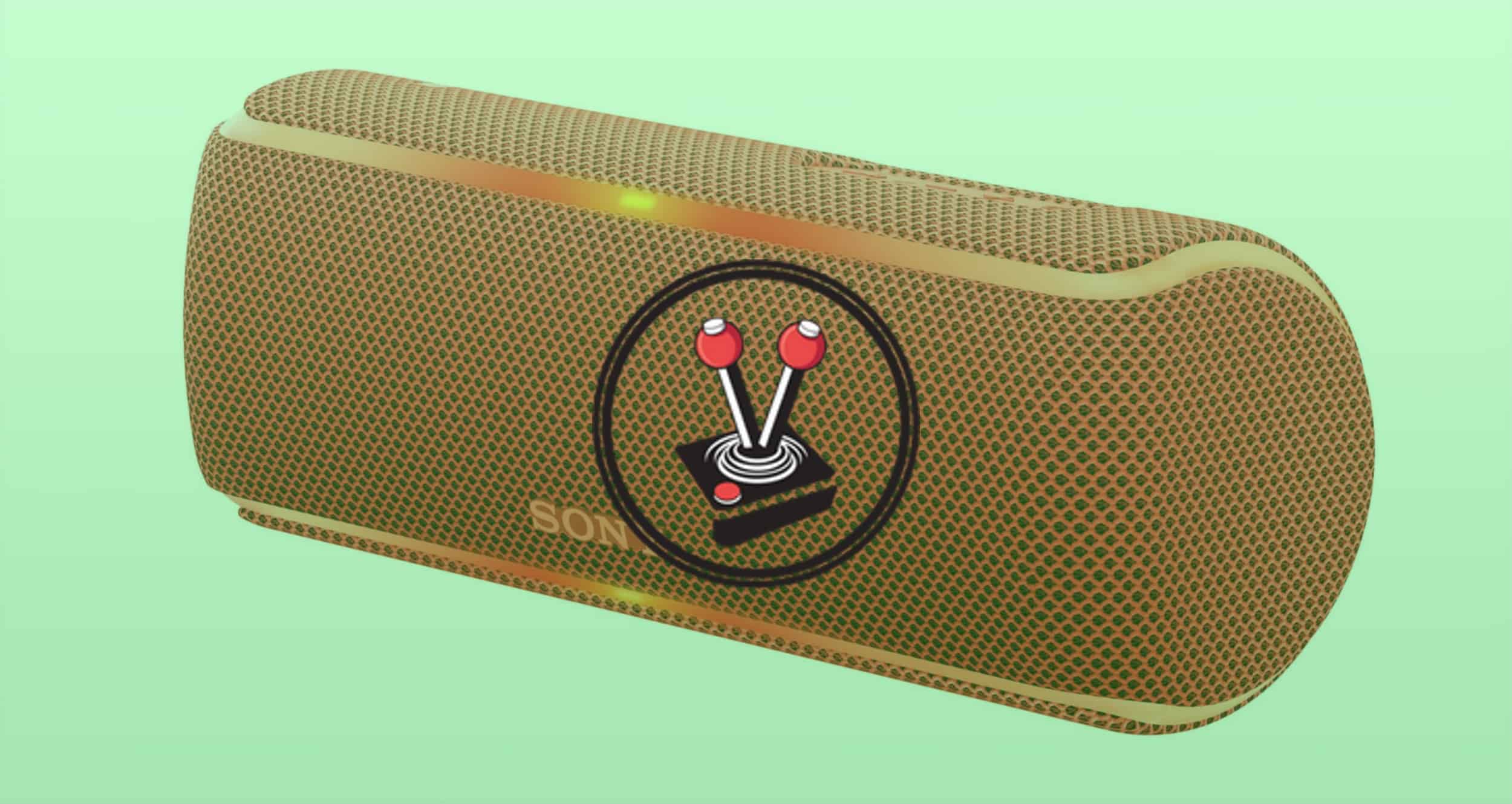 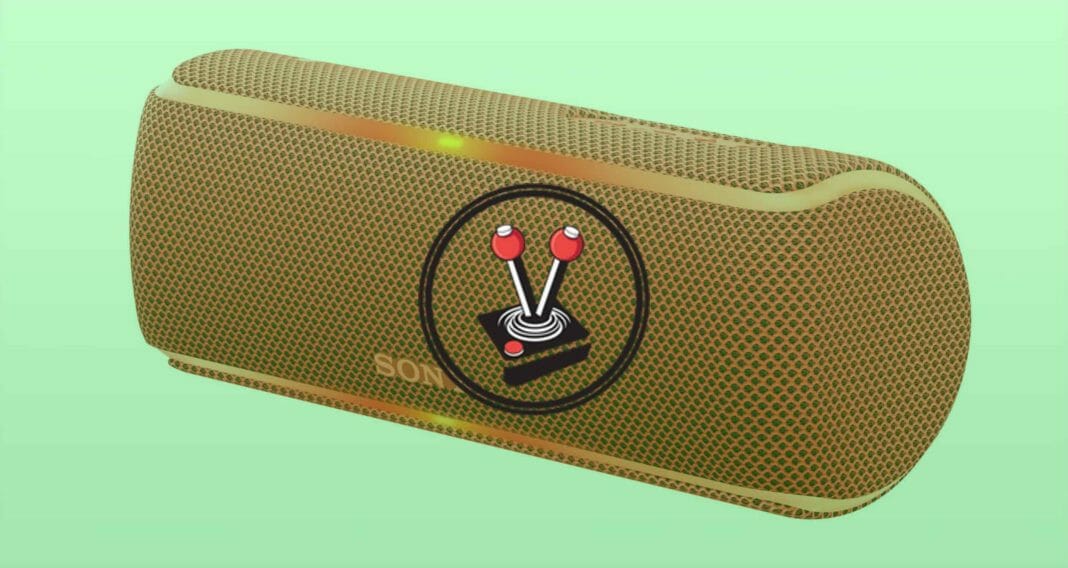 If you look at the latest portable speaker range Sony has on offer, the SRS-XB21 sits near the bottom as the smallest of the lot. Do not let that deter you from trying it out, however. It is one heck of a competitor to the likes of Ultimate Ears’ offerings – a brand both Hans and I have come to appreciate. Vamers was fortunate enough to give the Sony SRS-XB21 a go and it really surprised!

A common misconception around petite portable speakers is that they are hindered by their size. I often speak to one of my friends about speakers and Bluetooth capabilities, and his usual argument comes down to the fact that small speakers are basically just tweeters and nothing more. This means that small portable speakers can seemingly not output at full ranges. Well, I sure was glad to prove him wrong. The Sony SRS-XB21 not only delivers exceptional sound quality, durability, and a full range of sound; but it also looks good while doing it.

While I never tried out the XB21’s predecessor, I know that it shares almost no similarities except for its exceptional sound. Rather, the SRS-XB21 serves as an entry-level model that introduces you to the world of Sony’s current Bluetooth speakers, complete with a modern, sleek and sometimes rugged aesthetic.

The SRS-XB21 we reviewed was a beautiful looking Vamers red model. At first, the red felt a tiny bit muted, as if it was not ready to fully take on the colour – something the Logitech G433 handled with aplomb. However, as I got used to it, I started to appreciate the nuance of the red hard plastic, and the sort-of hashed design and the way it fits into the lightbar the speaker features. Colour bias aside, I must also mention that it comes in sweet baby blue (or teal depending on the lighting), and a super conservative and professional looking black. 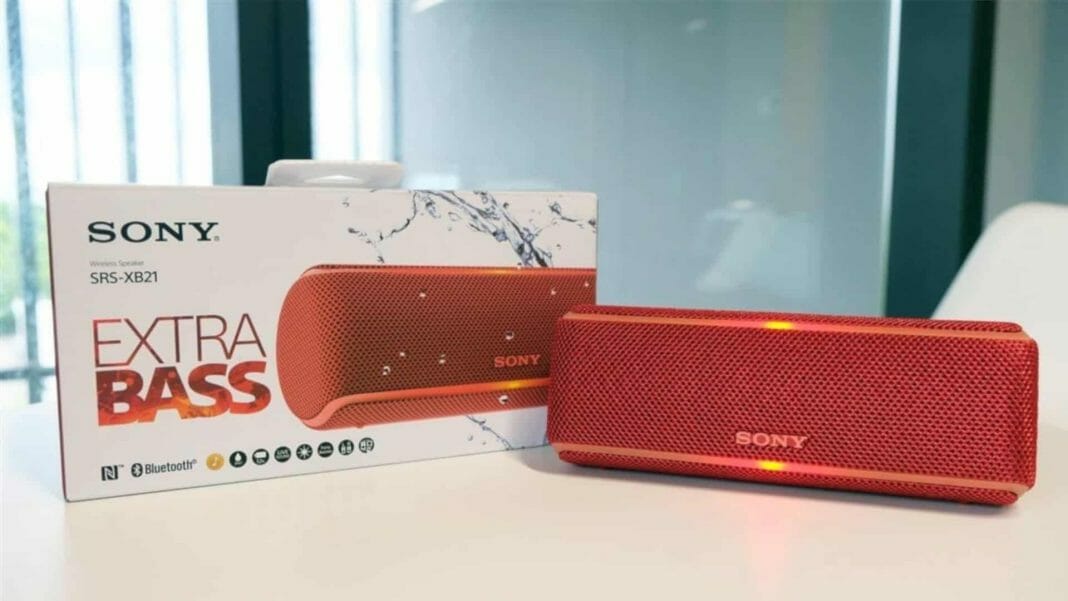 The Light Emitting Diode (LED) strip complements the colour of the speaker really well. Design-wise, it runs across the entire speaker, circling around on the sides, and meeting up with itself on the front. The lights inside the strip seem a bit muted, however. It seemingly features a full range of colours, and has the potential to light up parts of a dark room, but never quite manages to do so. With that said, I get it: it is a portable speaker, not a glow stick, and the LEDs have a lot more functionality once you actually download the Sony software – more on that below – so this point is much more of a subjective one than an actual complaint. I have to say that I did enjoy how the LEDs lit up in tandem with the music. At first it felt rather random, however as I observed it more, I came to appreciate the nuance in the fading and lighting up of the LEDs.

The tube design of the SRS-XB21 also looks pretty neat. Across the top, it is completely rounded. This means that there is no flat side, or “bed” that it can rest on. Rather, Sony opted to install small little feet for it, which the unit uses to stand upright. I honestly did not like this at all. More times than I could count, the dogs bumped into my desk while they wrestled, as dogs do, and the speaker would fall onto its back. I feel like, if Sony really wants those nubs to work, they either have to be farther apart to compensate for the speaker’s weight, or they need to be longer for better support. 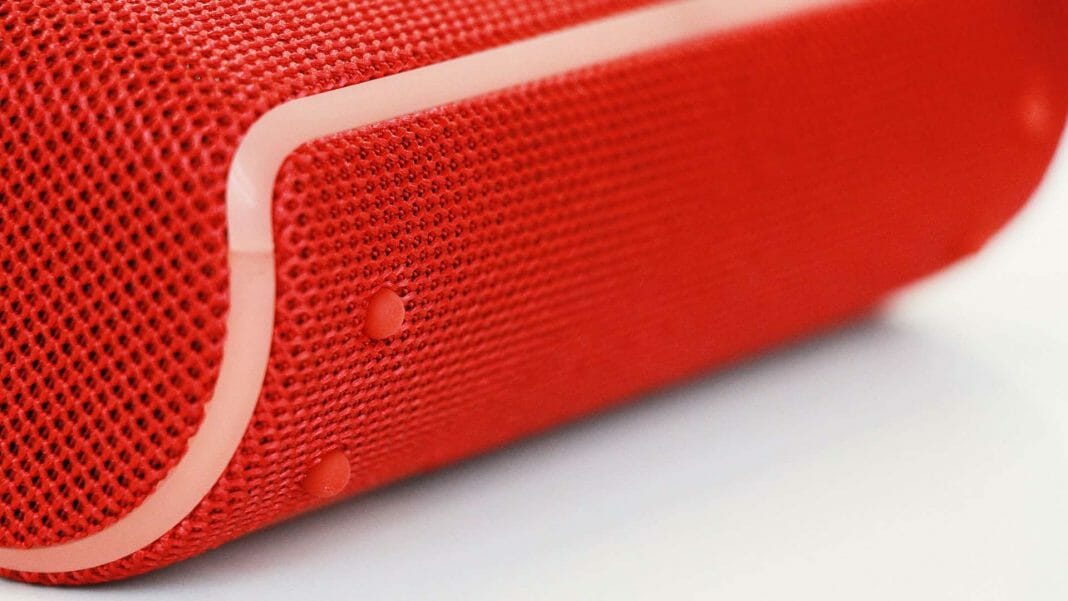 With that said, I must say that the speaker falling back (and sometimes off my desk completely) was a good durability test. I am no monster, and as such never thought of dropping the speaker deliberately or knocking it off a high surface. Nevertheless, the one meter or so it fell did not cause any issues. Sony claims that the speaker conforms to the 516.5-Shock MIL-STD 810 F standard and that it can survive 1.2 metre high drops onto plywood of 5cm thickness. In my case, it fell onto the carpet, but it was perfectly fine afterwards.

The speaker also features an IP67 Water and Dust Proof Rating of up to 1 metre deep for 30 minutes, which it handled spectacularly well (water just runs off it); as well as Near Field Communication (NFC) technology, Bluetooth 4.2, and a battery that can last for 12 hours before it needs a charge. Its input/output extends to a single Stereo Mini Port and a MicroUSB port for charging, both of which are hidden (along with the battery check button and pair button) below a thick silicone hatch.

Slightly slanted toward the back, however very reachable from the top, lies the speaker’s power button, volume rocker and pause/play button. It also has two tiny LEDs that indicate whether the power is on or off and whether it has a current Bluetooth connection. 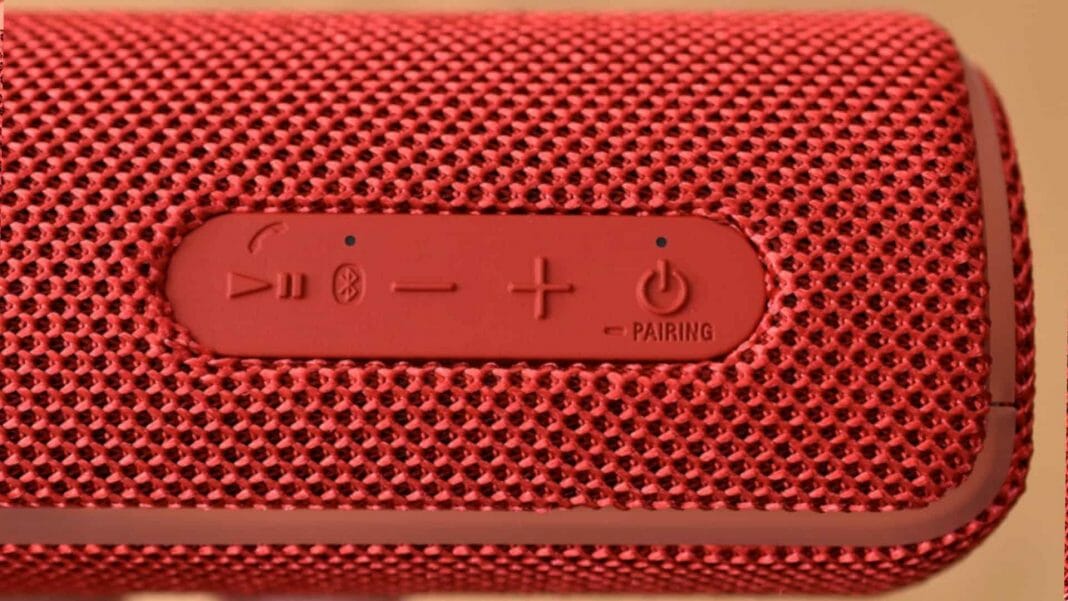 Beyond looking good and being as durable as can be, the speaker also features enhanced software capability with the Sony Music Center app.

The Sony Music Center app has a bunch of exclusive features that you can otherwise not access with normal Bluetooth functionality, such as advanced lighting features, custom sound profiles with EQ settings, and Sony’s “party booster” sound preset.

Once the app is installed on your iOS or Android device, it is really easy to use as well. Besides randomly creating “new” speaker entries every time I connected to the speaker, the app worked pretty much as expected: I created custom sound profiles for my podcasts, as well as easily jumped back to the default sound preset whenever I switched to music. The illumination options in the app are not as robust as you might think, but it helped a lot with the “muted” feeling I got from the LEDs at first. I just maxed that out and left everything else to how Sony intended it to be. 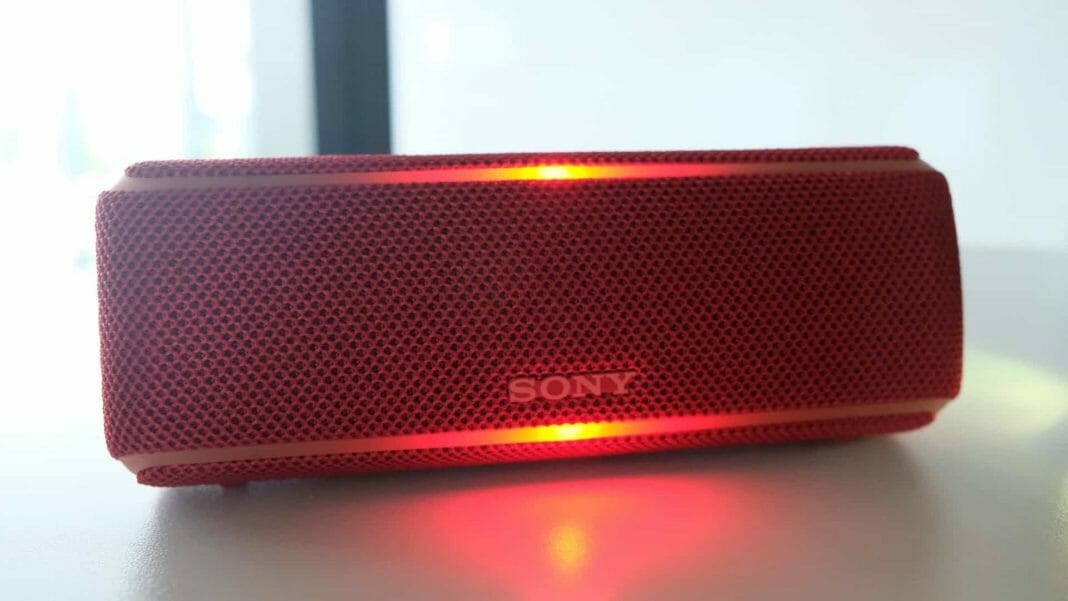 On that note, I also hardly ended up playing with the party booster feature. It felt like nothing more than a gimmick to me since it allows partygoers and friends to “join in” on the fun by playing the percussions or the like with the speaker. It is a nice feature to have, but I cannot see anyone using it at all after the first day of using the app.

Perhaps the best thing about the speaker, regardless of whether you use the app, or just hot-join it via settings, is the exceptional battery life. Sony claims that the SRS-XB21 can last 12 hours on a single charge. While I by no means did any scientific testing, I think I may have gotten more out of it than that. When I first received it, I charged it to 100% once, connected it, and left it. After around four days, I checked the battery level via the battery button, and the nice robot lady told me that it had “about 50%” battery left. FIFTY. PERCENT. I charged the device once I got it, and again before I packed it up and gave it back. That is very impressive.

Now, I am fully aware that the reason for this may be that I mostly listen to podcasts throughout the day, and only bump the volume up when I want to listen to that one awesome song I just discovered, but its battery life is genuinely exceptional. 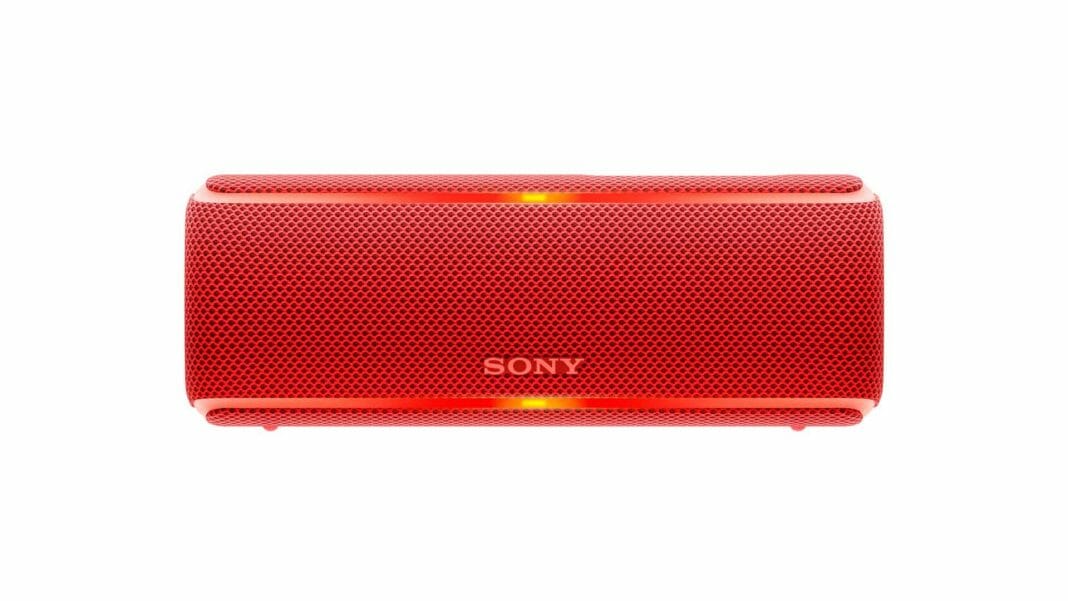 When all of that is said and done, I still have to convince you why you need this speaker over any other, and it is quite simple: for R1 999 (on Takealot), you really cannot get better. While it is easy to compare the price to the otherwise exceptional UE Wonderboom, which comes in at half the price of the SRS-XB21, it must be noted that I, personally, felt that the sound quality in the SRS-XB21 was better than that of the Wonderboom. It also looks better, if I am being honest.

Comparisons to other brands aside, I have to say that I really love this speaker. It looks great in all of its colour options; has aesthetically pleasing LEDs and a colour-matched LED strip that fits perfectly with its hard mesh design, and it is pretty durable to boot. Its battery also lasted me seemingly forever, even with Sony’s claim that it only stretches to 12 hours. Better still, when I had to make sure of how much power was left; I could simply check the Sony Music Center app or just press the battery button in the back.

The speaker can be set up via NFC, which completely bypasses the need to go into settings to pair it and whatnot as well, which is great. However, once paired, you never need to think about it again. It just works.

I think that is what I am going to leave this review on: “It just works”; and does so exceptionally well. 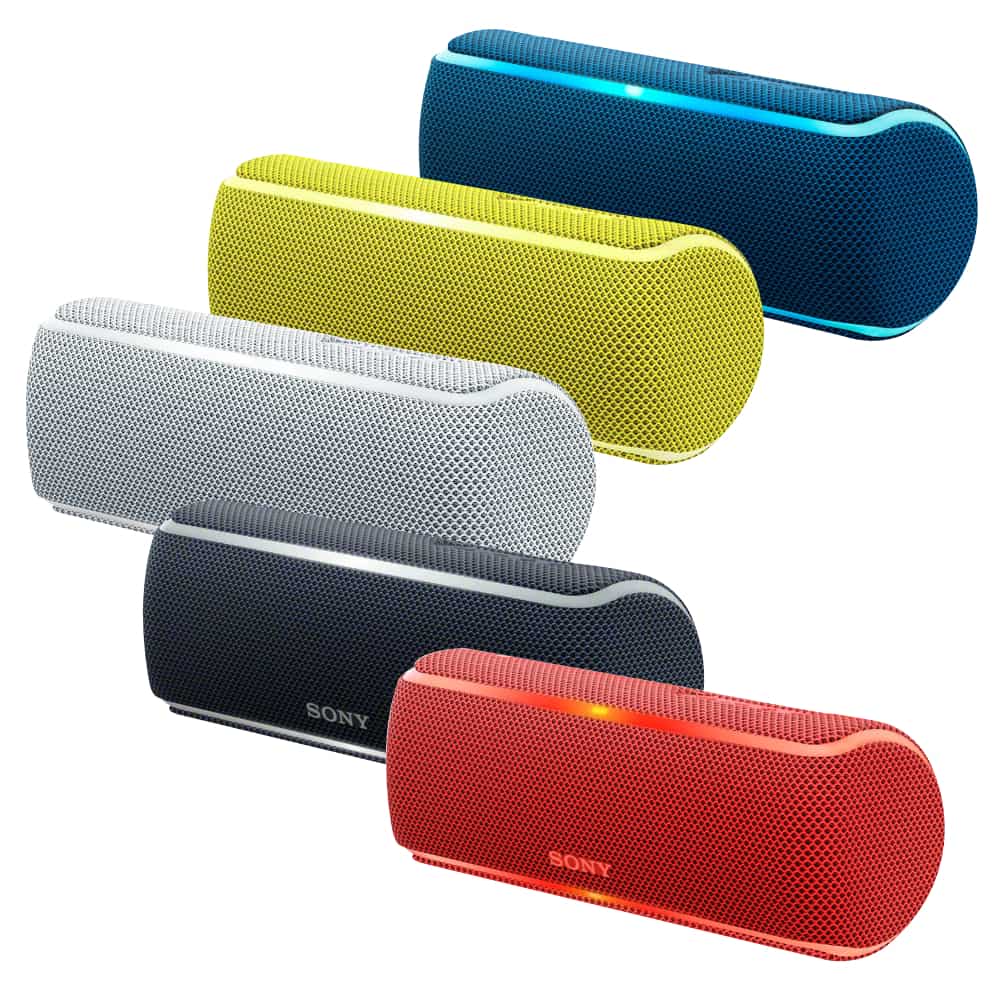