In 2009 Paramount Pictures rebooted the Star Trek series, reinvigorating the classic film and television saga for the 21st century. The J.J. Abrams reboot opened up with a young, blonde haired and blue eyed George Kirk who sacrifices himself to save escaping crew members, his beautiful wife and unborn child from the clutches of the attacking Romulan. It was this moment that not only defined a new beginning for the Star Trek franchise, but also sparked a career for a young and unknown Australian actor named Chris Hemsworth.With golden locks, sapphire eyes, rippling muscles and a panty dropping smile, Chris Hemsworth is without a doubt a bucket load of eye candy. Although he started from humble beginnings as a bartender in a Melbourne nightclub before landing a part on the Australian television show Home and Away, it is his enigmatic portrayal of Thor, the mighty Mjölnir wielding god of thunder and lightning in Marvel’s superhero movies, that solidifies Hemsworth’s geek credibility and thus his postition as a veritable Vamers Venator.

For his role as Thor, Hemsworth picked up almost 10kg of pure muscle, transforming the laidback Aussie from a lean surfer into a burly 6’3″ (1.91cm) mound of god-like muscle. In addition to the physical change, Hemsworth’s role as Thor thrust the talented actor into the immediate Hollywood spotlight. 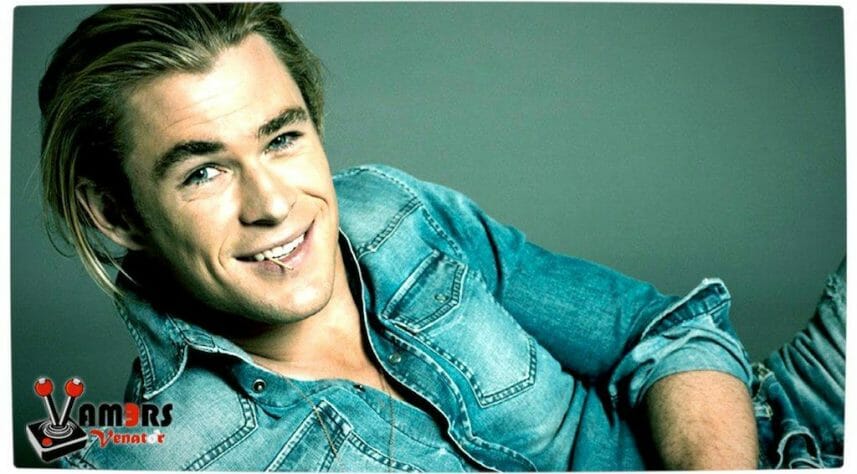 “As a kid, you run around the house pretending to be a superhero, and now to be doing it as a job… I feel very lucky”

Hemsworth’s acting ability, coupled with his deep resonant voice, bold blue eyes and a towering muscular frame, means that he has unwillingly kept fans glued to cinemas across the globe; whether it is with his swooning Aussie smile as Jed Eckert in the reboot of Red Dawn, his untimely and fiery hot death in Cabin in the Woods, as Kristen Stewart’s beefy love interest in Snow White and the Huntsman, or as playboy James Hunt in the upcoming Formula One inspired film, Rush.

The outback hardened Aussie hunk has come a long way since his acting debut as ‘Kim Hyde’ in Australia’s Home and Away and his short, but pivotal, role as George Kirk in Star Trek. Although he will inevitably branch out, career wise, Hemsworth will forever be known as Thor, and rightfully so given his acting chops, physical stature and Nordic looks.

Chris Hemsworth (born 11 August 1983) is an Australian film and television actor. He originates from Melbourne but was also raised in the Northern Territory in a small Aboriginal community called Bulman. His mother is an English teacher and his father is a social-services counselor. He is the middle child of three sons, with older brother Luke and younger brother Liam who are also actors. He is well known in Australia for his role as Robbie Hunter in the Australian soapy Home and Away before breaking into the Hollywood scene with a small role in J. J. Abrams’ Star Trek and then making it big as Marvel’s Thor. Hemsworth is married to Elsa Pataky and currently has one child, a daughter called India Rose.