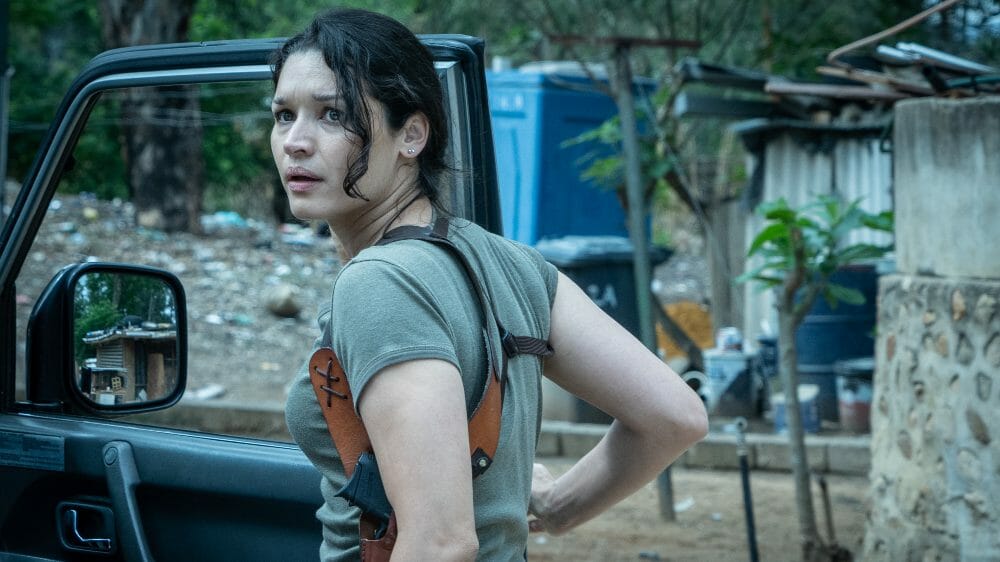 Kim Engelbrecht has followed up her 2022 South African Film and Television Award (SAFTA) Best Actress win with an International Emmy nomination for her title role in the M-Net crime series Reyka.

Reyka, now streaming on Showmax across Africa, is also nominated for Best Drama Series, up against Lupin, Narcos: Mexico, and Vigil.

Reyka is the first African drama series to be nominated in more than a decade – and only the third ever,  after Home Affairs in 2007 and 2008, and Sokhulu and Partners in 2009.

Reyka follows criminal profiler Reyka Gama as she investigates a string of brutal murders committed by a serial killer in the sugar cane fields of KwaZulu-Natal.

The opening night series at last year’s Monte-Carlo Television Festival, Reyka was sold by Fremantle to 147 territories, including BritBox North America, CANAL+, Channel4 in the UK, HBO LatAm, and Sky Italia. It was released as The Cane Field Killings in some territories.

“Congratulations to Kim, Quizzical Pictures and our international partners, Serena Cullen Productions and Fremantle,” says Yolisa Phahle, CEO: Connected Video at MultiChoice. “This is MultiChoice’s fourth International Emmy nomination in six years, building on Thuso Mbedu’s Best Actress nominations for Is’thunzi in 2017 and 2018, as well as The River’s nomination for Best Telenovela in 2019. As the largest producer of original content on the African continent, we licensed seven times more content internationally in 2021 than the year before and have seen a dramatic increase in co-productions recently, working with the likes of Acorn, Banijay, CANAL+, HBO, and NBCUniversal. African stories are increasingly finding audiences abroad and attracting investment to the continent.”

“My fellow producer Serena Cullen called but I was in a meeting and couldn’t take her call,” says executive producer Harriet Gavshon of Quizzical Pictures. “It was only much later when I saw the WhatsApps coming through that I heard the news. I couldn’t believe it. After speaking to Serena, who was on a train to Paris, I called Kim. There was load shedding so it was a terrible line. It took three calls for her to actually get the news.”

“This nomination means so much more than you could ever imagine,” says Engelbrecht, who’s also had roles in series like Raised By Wolves and The Flash since making her name and winning her first SAFTA as Lolly in Isidingo. “This serves as validation to our entire Reyka team that hard work and commitment does not go unnoticed. Congratulations Team Reyka. I saw a quote this morning: ‘You can get to where you want to go from exactly where you are.’ Thank you to the International Emmys for the incredible nomination. Thank you for the opportunity to share our show with the world. South Africa has so many stories to tell.”

Engelbrecht is just the fifth African actress to be nominated for the International Emmy, after Egyptian Menna Shalabi (Every Week On A Friday) in 2021, Thuso Mbedu (Is’thunzi) in 2017 and 2018, and Lerato Mvelase in 2010 and Brenda Ngxoli in 2007 for Home Affairs. Mbedu has gone on to star in The Underground Railroad and The Woman King to international acclaim.

“It is wonderful for South African talent to be recognised,” says Gavshon. “We are so grateful for the investment that MultiChoice has made in local content in South Africa. Together with Fremantle, they have stayed with this project over many years and encouraged us every step of the way. The Reyka team was incredible and the shoot, although in the middle of a terrible wave of Covid, was extremely special. Everyone knew they were working on an exceptional production and worked with great care and passion. This nomination is a testament to creator Rohan Dickson’s incredible scripts and to the really ambitious and imaginative work of the directors, production and creative team, who stretched themselves every day.”

“Reyka has now surpassed all our expectations,” says Cullen. “I couldn’t be more thrilled that it has been nominated for two International Emmys. It’s been a long journey but with MultiChoice and Fremantle investment and belief, we’ve made a truly South African story for South African audiences but that also has a global reach. I couldn’t be happier!”

“This is a proud moment for Fremantle and MultiChoice,” says Julie Hodge, Vice President Editorial, Global Drama at Fremantle. “The series has been in development for many years, but we were confident from the off that this rich and compelling story would be one of our standout international dramas – we’re thrilled to see that being recognised with two nominations at the International Emmys.”

The Independent (UK) gave Reyka four stars, calling the crime series “almost too disturbing” but “beautifully filmed in stunning verdant landscapes and endless skies… a drama that sears itself into your consciousness.”

“Forget the chilly surrounds of snow and ice: the haunting cane fields of South Africa is our new favourite location for a dark crime drama,” says Australia’s SBS. “Lovers of dark crime fiction will find their appetites for the grim and grisly well satiated with this compelling South African noir.”

Reyka is jointly produced by Serena Cullen for Serena Cullen Productions in the UK (Lady Chatterley’s Lover, Four Lives and The Larkins) and Harriet Gavshon for Emmy-nominated Quizzical Pictures in South Africa. The executive producers are Serena Cullen, Harriet Gavshon and Rohan Dickson. Yolisa Phahle, Nkateko Mabaso, Allan Sperling, Jan du Plessis executive produce for MultiChoice, and Julie Hodge for Fremantle, with Zee Ntuli and Catharine Cooke as directors. Reyka is distributed globally by Fremantle and made with the support of the Department of Trade, Industry and Competition.