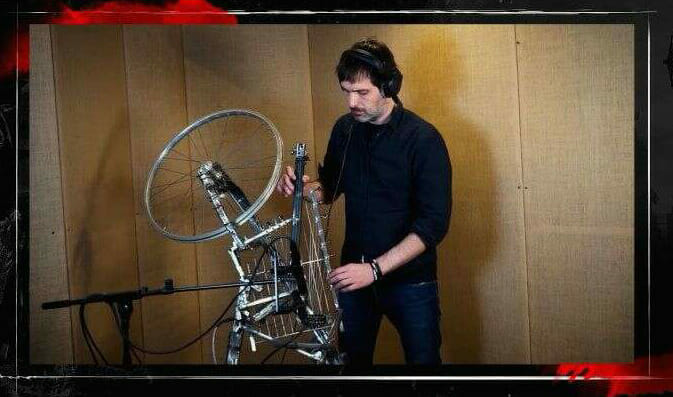 Fashioned from an old bike wheel, a steel rod, several metal wires, and other refuse of the city, the Electric Psaltery evokes the scrappy ingenuity of Villedor’s survivors, as if pulled right from the game world itself. Designed by DIY instrumentalist and musician Nicolas Bras, the Electric Psaltery’s strings, which can be plucked or bowed, correspond with specific in-game characters. The “wheel of fate” that rests atop the psaltery makes a soft rattle when spun, which can be heard in-game when making major decisions that will affect the story, characters, or world.

To truly bring the ambitious Dying Light 2 Stay Human soundtrack to life, Olivier Derivière and Techland collaborated with one of the world’s best orchestras, the London Contemporary Orchestra. Together in Abbey Road Studios, Olivier and the Orchestra recorded the entire soundtrack, creating a musical experience players won’t forget.

“It supports narrative by generating nostalgia in certain moments, encourages bravery in battles by adding to the adrenaline with the right tunes, and energizes the player, pushing them to try harder as they parkour through The City,” said Adrian “Pyza” Ciszewski, Creative Director of Dying Light 2 Stay Human. “This close collaboration between us has led to the sound developing in line with our artistic vision of what we’re going to see on the screen and blending in with it perfectly. It was an ambitious project, yes, but we had a lot of fun, and seeing the end result has definitely made it worth the effort.”

Revealing Dying Light 2’s main theme, “Run, Jump, Fight”, just before the latest Dying 2 Know episode, Olivier said, “It has been an amazing journey working with Techland on creating the unique soundscape of the game and pushing boundaries for open-world music design.” The track’s strings, brass, and drums evoke running, jumping, and fighting, respectively. Watch the latest Dying 2 Know More episode to learn how the soundtrack for Dying Light 2 Stay Human was created and recorded by icons of the music industry.