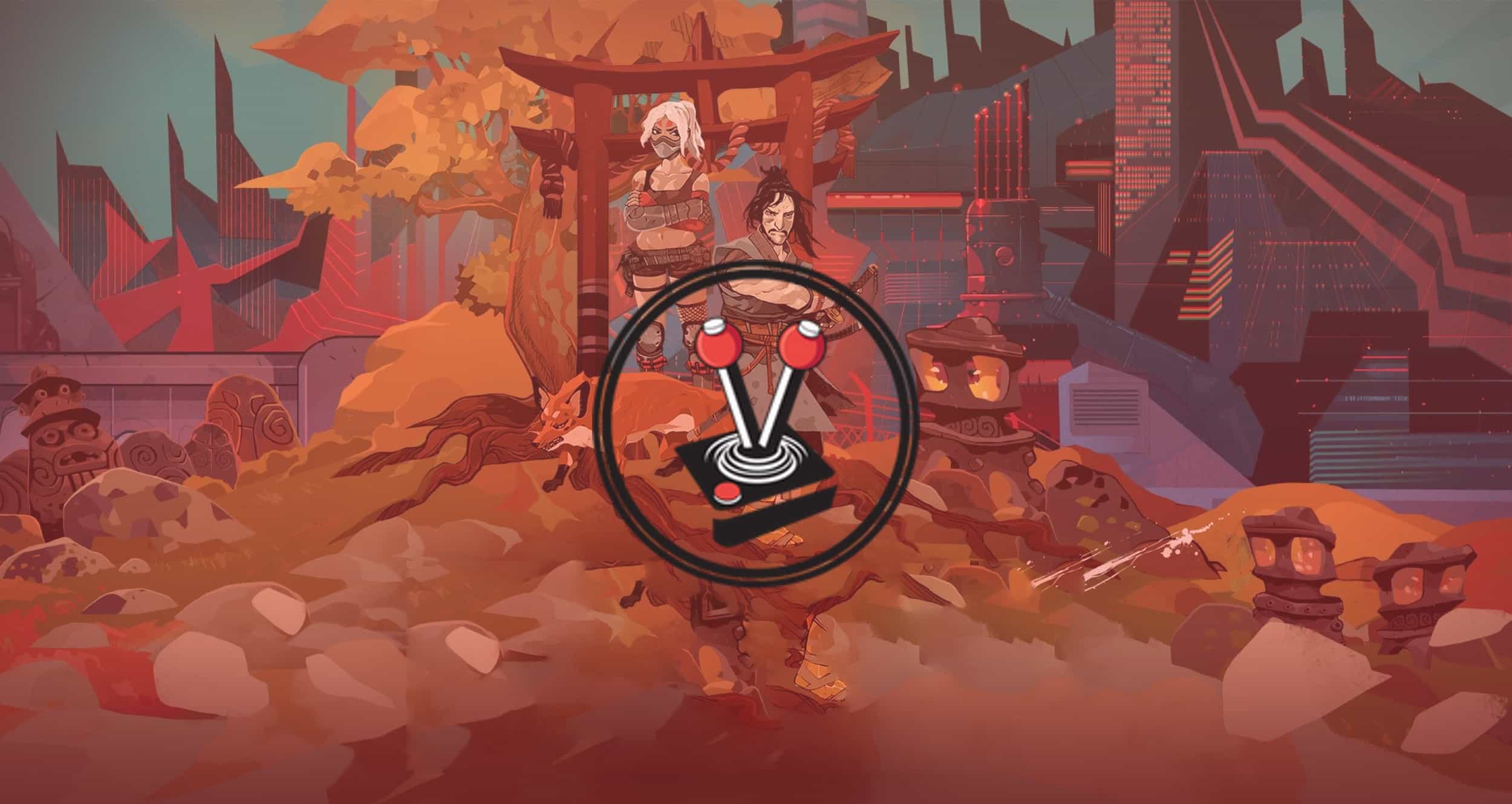 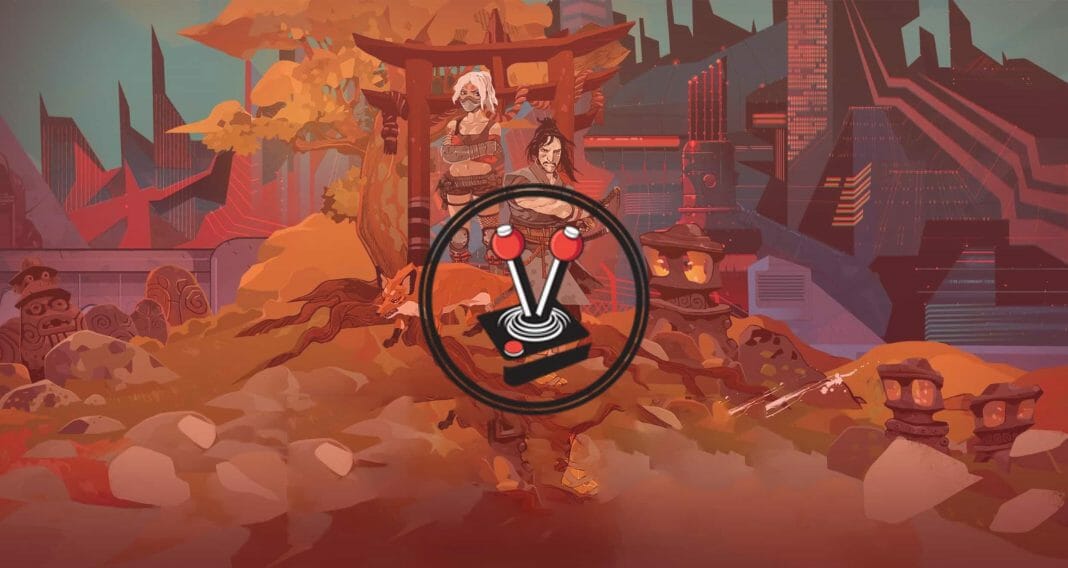 Back in the day, I still vividly remember popping in Batman Beyond into the original PlayStation and losing tens, if not hundreds, of hours on that crappy excuse of a licensed side-scrolling beat’em up. Ah, yes, the classic ‘beat’em up’ genre, which has since lost favour in main stream gaming. However, thanks to indie developers like Wako Factory, this once great genre is making a come back. Say hello to Samurai Riot, a side-scrolling beat’em up slasher that is reminiscent of gaming’s golden era — that is to say the 80s and early 90s.

Samurai Riot is a modern take on the side-scrolling genre that has, for better or for worse, practically gone the way of the dodo; save for a few rare instalments here and there. Despite being attached to a genre that has lost favour, this game shows heart. As such, it makes this review difficult to write because as much as I have sought a reason to love it, I cannot help but feel indifferent about it.

Way of the Samurai (Story)

Samurai Riot is an old-school side-scroller with co-operative play in mind. The story focuses on two playable characters called Tsururamu and Sukane, in what is essentially a clichéd mess of Samurai tropes. The game opens in what appears to be the traditional Edo period, only to be replaced by much more colourful set pieces that have nothing to do with the Edo period whatsoever. One can argue that it is just a game and that creative liberties were taken, and I would respect that… had the game not opened up with such a strong declaration of the time it is set in. 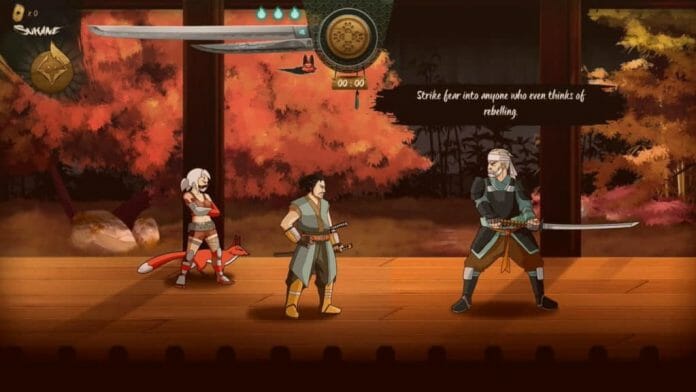 In all fairness, I must admit that a set time is never given throughout the narrative. It just ends up feeling like Wako Factory threw pretty much everything they knew about Samurai into a field, and hoped that something — anything — would shine through the grass.

Thankfully, and quite surprisingly, choice seems to play a big part in Samurai Riot. I go into more detail about choice below, but know that right from the start, up until the end, both players can make decisions that ultimately boil down to one of several endings. All endings are only slightly different in nature, mind you, but they are there nonetheless. A nice addition to an otherwise bland experience.

At the start, you have the choice to play as either of the two characters, each of which has their own strengths and weaknesses. If you have a friend, you can both jump into the fray and play through the story that way. I must stress that it felt like I absolutely needed to play the game with a friend as balance levels were all over the place on my own. I ended up dying and losing much more than I feel I needed to before I managed to get anywhere. That is, until I managed to get someone to play with me.

Samurai Riot is all about choice. This is made clear right from the start. After you make your choice between Tsururamu, who is made out to be an actual Samurai, or Sukane, who seems to be designed around the Shinobi profession of yore, you are given a choice of schools that your character comes from. There are four to choose from, each of which changes the colour of your character and also includes an added stat bonus. Throughout the game, you will eventually unlock enough currency that will let you choose from an extra seven schools. 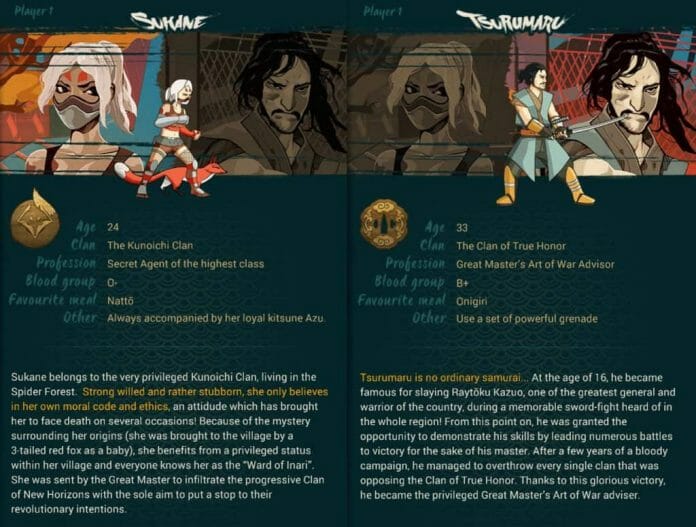 Combat feels strong, but ultimately falls off in the mess that is the genre that the game is based in. On the surface it is fairly simple: you have two simple attacks: one where you use your weapon, and another where you kick furiously at whatever is in your way. Attacks can be strung together to create combos. Similarly, attacks can also be strung together to juggle opponents that have been lifted into the air. There is also jump that can be comboed into a dash, a guard, a grapple, and special attacks called Fury attacks. Fury attacks make short work of just about any enemy on the screen at any given time; so long as the special meter is filled up.

A major criticism of the game is in the types of enemies that are faced by the player. Variation is severely limited. I think I only counted about five different enemy types. Thing is, once you have fought each of them, you know how they move. This takes away from not only the immersive quality of the game, but also the fun factor. Although a good time can be had, no one really likes battling the same enemy types, again and again, just on different stages. 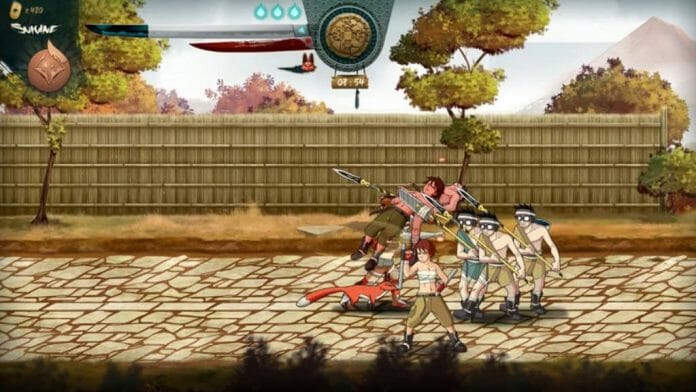 Perhaps the biggest star in the entire Samurai Riot arsenal is the absolutely stellar soundtrack. Tracks seem to mix hip-hop and traditional Japanese beats; and the results are fantastic. The music fits every level like a well-worn glove and helps to alleviate the bore that stems from the sometimes dull and repetitive enemies that you have to face. Perhaps the only gripe I have about the soundtrack is the fact that I swear the tracks began to loop two stages in. I may be wrong on this, and I cannot seem to find a concrete answer on the Internet, but I do not think that the sample size of tracks is big enough to accommodate all the stages in the game. A shame, considering I actually did like listening to the tracks as I beat my way through the baddies.

In terms of performance, I can say wholeheartedly that the game gave me zero trouble whatsoever. This is such a rare occurrence on PC nowadays, that I have been blown away by the absolute joy of loading the game up.

The reason for the stellar performance could be because of the general aesthetic of the game. The pseudo-3D side-scrolling nature of it attributed greatly to the fact that you could probably run the game on a potato. Do not quote me on that. All I am saying is that the game runs astoundingly well, and it looks good while doing so too. 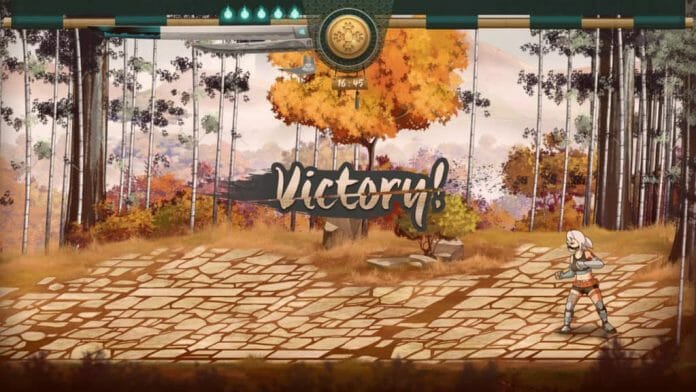 It also helps that the animations and design of just about the entire game look to be hand drawn. If the game’s strange Feudal Japanese setting has anything going for it, it is that the characters look like they fit the period perfectly.

Less is not always more (Conclusion)

The game is flawed in a lot of ways, yet it begs to be loved… and almost succeeds. Right from the start, it throws you into a historic Japanese setting that does not know what it wants from itself. Player choice is a biggy in this game, which is a very nice addition, but in the end, it just makes you play it through multiple times for seemingly menial changes in the endings. The soundtrack has wonderful potential, but falls short when it starts to sound like it loops, not even three stages into the game.

The take away from the above paragraph is that the game seems to be all over the place. Thing is, it is a good game! It plays really well and performs even better, but there is just so much working against it. From having to go up against the same palette of perhaps five basic enemies throughout the levels, to playing through a story that does not know where it wants to be set, through to bosses that feel outright unbalanced and overpowered until you ask a friend to join you; the game feels unsettled. Like trying to eat jelly before it has set.

Overall, Samurai Riot is a pretty decent game. I like it, but I also do not. The game is flawed, and perhaps that is the beauty of it given the nature of the game and my fairly limited knowledge of the developers. However, I can say that the second iteration that will stem from this, will no doubt be better in each and every way possible.