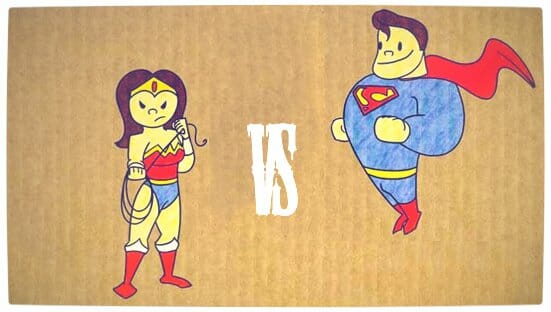 Good old Superman has been receiving a lot of airtime recently with Bryan Singer and Christopher Nolan’s Man of Steel. In fact, he is also the main protagonist and villain in this year’s best superhero fighting game, Injustice: Gods Among Us. Even at this very moment, there is a highly entertaining battle of opinions taking place on this blog concerning whether Superman could, in fact, be defeated by Batman in battle. Check it out here, add your opinion, and you could win a copy of Injustice: Gods Among Us for PlayStation 3 and a Batman Bobblehead.

Despite Superman’s incredible media coverage, many have often wondered if Kal El would be able to ‘hold his own’ without his super abilities. To illustrate this point, artists over at The Meta Picture have drawn the following humorous panel depicting a hypothetical scenario whereby both Wonder Woman and Superman explore the loss of their super abilities. The results are entertaining and reminiscent of the way in which Wonder Woman is able to kick Nazi ass in the recent fan-made trailer for a Wonder Woman movie.