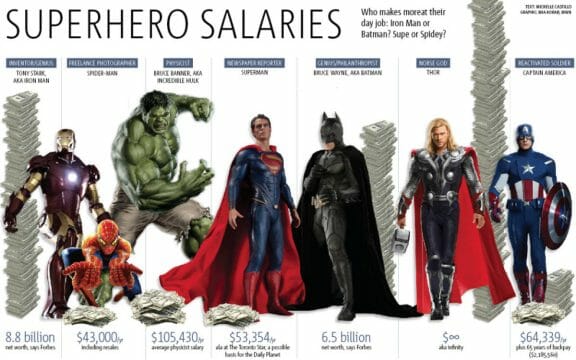 It is easy to forget that when superheroes are not saving the world, they lead fairly ordinary lives. As such, it stands to reason that they would also need ordinary jobs of some kind in order to afford their costs of living.

All geeks know that Batman, with Wayne Enterprises, and Iron Man, with Stark Industries, are billionaire playboys who use money like it is no object. But what kind of an income do other firm favourites, like Superman, Captain America and Thor, among others, receive?

The interesting infographic above does a great job of showcasing and comparing the annual ‘real world’ salaries between some of the world’s most popular superheroes.

The most startling revelation, however, is that when compared to other heroes, it is Thor who is the most wealthy. According to the infographic, Thursday’s favourite hero has an unlimited supply of wealth at his disposal.

The reasoning behind the infographic is not explained, but it is safe to assume that Marvel’s Norse god of thunder has unlimited wealth simply because he is immortal and Odin most likely pays for everything.