The king is, indeed, back in the building!

I was given the opportunity to meet the king of rock, “Elvis Presley”, at the Joburg Theatre’s media opening night for Elvis: The Show, starring the number one Elvis impersonator Nathan Belt.

Brought to you by the people that brought you Michael Jackson: History and The Greatest Love of All: The Whitney Houston Show, Elvis: The Show pays a wonderful homage to the king of Rock and Roll and fails to disappoint where it matters most.

From Blue Suede Shoes to Jailhouse Rock, and even Love Me Tender, Nathan Belt delivers the most authentic Elvis impersonation that I have ever had the pleasure of hearing. The selling point for me was when Belt performed my favourite Elvis song, Little Less Conversation, with remarkable aplomb. Admittedly there were a few songs that I was unfamiliar with, but even those felt as right as ever.

As was a key factor in all of Elvis’ songs back in the day, no matter how loud the instruments or how bad the acoustics, you could always hear the king’s voice clearly over everything else. During the first part of the show, however, there seemed to be a few songs that just did not come off entirely as they should have, with Belt’s voice being drowned out by the live band. Thankfully, this issue was only exclusive to parts of the first act, after which it was smooth sailing.

It is always a pleasure to experience the art of someone who appears to ooze the love and affection that they put into their work. Nathan Belt is that kind of artist and he gave a fantastic performance as the king of rock. Lyrics were spot on, movements were uncanny to the king himself, and even the playful banter between Belt and the crowd was spectacular.

The stage was set up in such a way that the spacing between the band members and their instruments complimented the sheer size of the stage itself, allowing the king of rock to “Shake, Rattle and Roll” to great effect. The two-tiered stage shone especially well during the final part of Jailhouse Rock, which featured incredible props like a beautiful car and wonderful period-sensitive dining tables. The decor and props could not have looked more authentically pleasing. 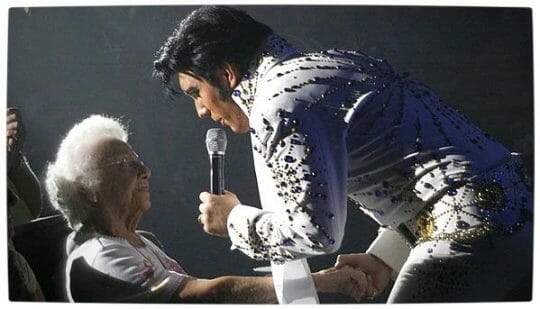 Despite the beautiful set design, I noticed that the back part of the stage was hardly ever used. What should have been a great dancing performance would often fall flat, but only in the sense that there were too few dancers to fill the unused space.

Issues of space aside, the show offers an incredible performance complemented by spectacular music and a beautiful set. Nathan Belt is called the world’s number one Elvis Impersonator, and rightfully so.

Elvis The Show is now performing at The Mandela at the Joburg Theatre Complex and will continue through to the 2nd of February 2014. Tickets start at R100 per seat.