Titanfall was, without a doubt, E3 2013’s most unexpected and critically lauded video game. With over 60 industry awards, the strategic mech based first person shooter captured the undivided attention of every single gamer who braced the several hour long queues for a brief hands-on demonstration.

Titanfall is the debut title from Respawn Entertainment, a new game development company founded by the creators of Infinity Ward and the highly successful Call of Duty franchise.

Courtesy of the immense industry and public interest for Titanfall, Respawn Entertainment have announced that the studios’ debut title will also receive the collector’s edition treatment – and it looks incredible.

The Titanfall Collector’s Edition will retail for $250/£250 when it launches in March of 2014 and includes: 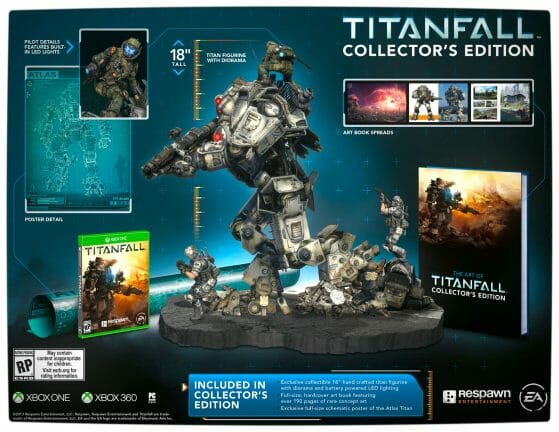 Titanfall is being created and developed by Respawn Entertainment and will be published by Electronic Arts. The new game is also exclusive to Microsoft based systems, meaning Windows based computers, Xbox 360 and the forthcoming Xbox One.

Titanfall will be available in 2014 on 11th March in North America and 13th March in Europe and Australia (hopefully South Africa too).