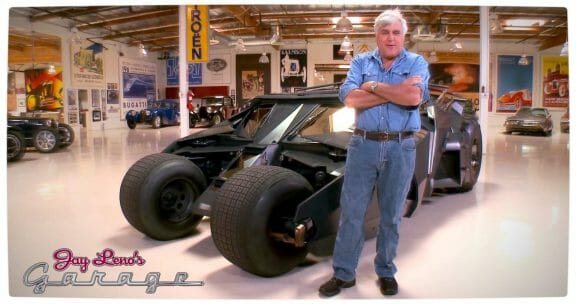 Jay Leno, one of America’s most famous late night talk show hosts, has a YouTube web series that focuses on his passion for automobiles.

The series is aptly titled ‘Jay Leno’s Garage‘ and explores a myriad of motor vehicles ranging from James Bond’s classic Jaguar E-Type through to supercars like the 2014 McLaren P1 and awesomely unusual rides like Batman’s Tumbler from Christopher Nolan’s The Dark Knight film series.

Naturally, as evidenced by the photographs, the post today is about the latest episode of Jay Leno’s Garage which takes a very close look at Batman’s Tumbler from Warner Brother’s Studios in Burbank, California. Interestingly, it is the very same Tumbler that is available to tourists who partake in the Warner Brother’s studio tour, which I have done twice before.

The video is very insightful and interesting, but the best and most enviable part is when Leno takes the Tumbler for a spin. Despite the poor sound insulation from the powerful motors, it looks like one heck of a fun ride.