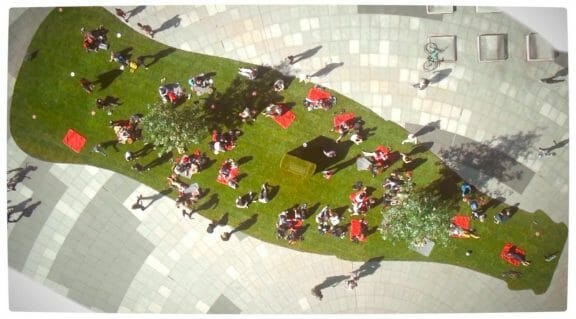 The latest advertisement from Coca-Cola sees the world’s most popular beverage company attempt to save Lithuanian’s from a drab urban existence with a bright red truck spewing bright green grass.

In the new advertisement from Wieden + Kennedy in Amsterdam, the Coca-Cola truck rolls out legitimately natural turf in a concrete square, essentially creating a ‘pop-up park’.

Unlike real parks, the faux park is naturally adorned with Coca-Cola’s unmistakable vending machines and a series of attractive millennials who are encouraged to take off their shoes. Doing so causes the vending machines to release bottles of the beverage company’s addictively refreshing soft drink.

The advertisement, embedded below, is very well produced and is a part of the Coca-Cola company’s global project “Where Will Happiness Strike Next”.