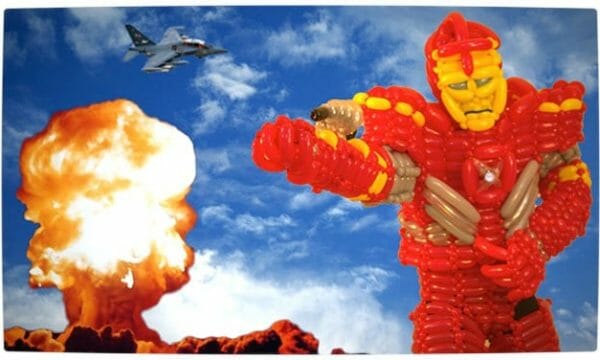 We previously featured Ned Stark sitting on a Throne of Balloons, but today we present the work of the very talented Jeff Wright, a balloon artist who is currently working as a missionary in an orphanage in Cochabamba, Bolivia.

Jeff was approached by Blinkbox, a British video streaming and rental service, to create the Iron Man armour to celebrate the release of Iron Man 3 on the service. There was a catch though, Jeff had to create the armour using no more than 500 balloons and in less than 10 hours.

Jeff jumped at the challenge and meticulously crafted the legendary yellow and red suit out of 500 balloons and in less than the challenged time of 10 hours – a truly incredible feat.

The Iron Man balloon suit is really cool. I would try and make one, but I have an irrational fear of balloons bursting in my face. You can watch Jeff Wright in all of his balloon building glory below.