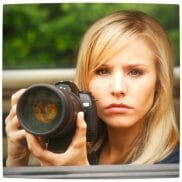 Veronica Mars is a cult classic. The series debuted during my first year of university and I clearly remember how it quickly became one of the hottest shows on television. Everyone wanted to know what had happend to Amanda Seyfried’s character, Lilly Kane.

With a fresh and interesting cast, coupled with quick and witty dialogue alongside interesting and intelligent story arcs, Veronica Mars had a winning formula for the 16 – 25 demographic. In a sense, Veronica Mars did to Kristen Bell what JJ Abrams’ ALIAS did for Jennifer Garner and Bradley Cooper.

Kristen Bell personified the gorgeous, quirky, tenacious and strong willed Veronica Mars, a character who during the course of the series progresses from high school to college whilst moonlighting as a private investigator under the tutelage of her father in the fictional town of Neptune, California.

Alas, the series was cancelled after its third successful season, putting an end to Miss Mars’ super sleuthing adventures and leaving a variety of plot and character arcs unanswered. That is, until now.

In a recent twist to the fate of Veronica Mars, the show’s creator, Rob Thomas, and title actress, Kristen Bell, placed the movie on Kickstarter – a United States based crowd funding website. In less than 10 hours, over $2 million had been raised for the creation of the long rumoured and fan wanted motion picture movie.

In truth I am not sure how I feel about fans having to raise the money for a wealthy film studio like Warner Brothers to exhume a well loved series. Having said that, you can bet that I will be one of the first people in line to watch the Veronica Mars Movie once it is released.

The brilliant Kickstarter campaign video is embedded below and is enough give any Veronica Mars fan a geekasm.