When compared to the fourth generation iPad, the iPad Air is thinner (7.5mm), lighter (478g), faster (new A7 chipset) and features a form factor similar to the iPad Mini.

Other distinguishing features of the new iPad Air include stereo speakers, like the iPad Mini, as well as multiple antenna MIMO technology to make connecting to 802.11 a/b/g/n WiFi networks faster and better.

Battery life remains solid at 10 hours of continued use with capacities ranging from 16GB through to 128GB. Like previous models, the iPad Air is available as WiFi-Only or WiFi with Cellular.

The chart below, courtesy of iMore, offers more detail into the differences across generations of iPad. 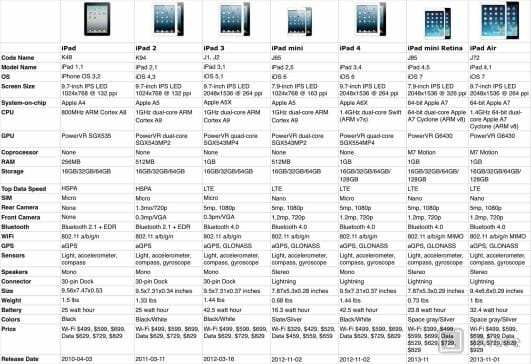 The iPad Air is a step in the right direction for Apple and offers the definitive 9.7-inch iPad experience when compared to older models of the iPad.

The iPad Air is now available in South Africa with the following suggested retail prices:

I am personally waiting for the iPad Mini with Retina Display before upgrading since the new Mini is identical to its big brother in every way, with the exception of screen size.

Rumours point to the iPad Mini with Retina Display releasing at the same time as the iPad Air, but those details could not be confirmed by the time of publication.

Will you be purchasing a new iPad Air or iPad Mini with Retina Display?